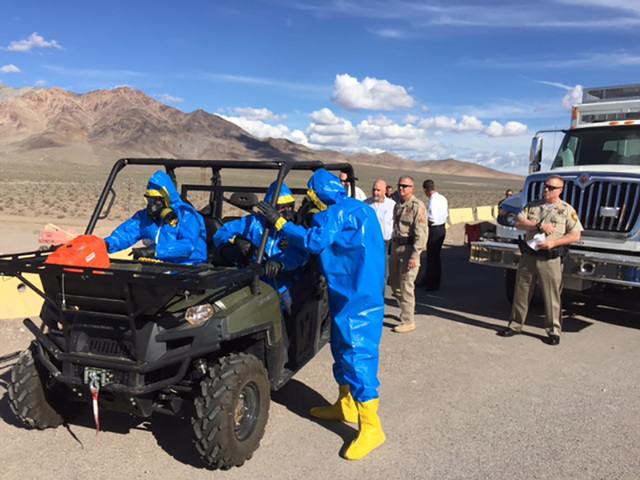 Nye County is requesting funds from the Nevada Legislature for the low-level radioactive waste site in Beatty.

At the Tuesday meeting, county commissioners approved the application for the “Fund for Care of Sites of Disposal of Radioactive Waste” that will be used to address the care, maintenance and repair of the facility.

Officials didn’t specify the amount of money that they need.

In a letter to the state, Commissioner Frank Carbone said, “As the first-level responder to the incident of the industrial fire which occurred on Oct. 18, 2015, or incidents of a similar nature, Nye County realizes the need to have a better trained and equipped response team. A more accurate accounting of personnel and equipment costs required to stay ‘mission ready’ is now fully understood. The funding is imperative to help Nye County maintain a sustainable readiness state.”

The investigation into the fire at the shuttered waste disposal site found that the incident was caused by a chemical reaction between rainwater and sodium metal in the trench area where low-radioactive waste had been buried.

Joe Pollock, deputy administrator at the Division of Public and Behavioral Health said some repairs have been done to the site since the incident.

Since October 2015, Radiation Control Program (RCP) contracted with U.S. Ecology Nevada (USEN) on a number of fixes including removal of protective barriers and completion of interim repairs such as packing ejected material and 11 partial and complete barrels into overpack barrels.

“In January 2016, RCP contracted with USEN to repair two additional cracks and subsidence locations on Trench 7 and 22 by regrading the area and adding soil material to the surface where rainwater was pooling. These additional steps will prevent additional infiltration of rainwater while a long-term closure plan is developed and implemented,” he said.

The state of Nevada has completed the Request For Proposal process on a complete site evaluation, Pollock said.

“Under the contract, the awardee will analyze the site and provide long-term restoration and maintenance recommendations. In the interim, the condition of the site will continue to be monitored with repairs done as needed to maintain the safe storage of the hazardous materials,” Pollock said.

Operations are underway to regrade and add new material on top of the site as the process nears the final remediation phase, he added.

Commissioner Schinhofen said the state of Nevada previously had allocated $8 million for the Beatty low-level radioactive waste site, but the money was later swept into the general budget.

“What this letter is doing is asking them to reinstate that and make sure that we get a portion of it since we are the county that would first respond and we have to spend our time and energy on it,” Schinhofen said.

The site continues to be monitored by U.S. Ecology Nevada workers and repaired as needed, Pollock said.

“The site is considered safe as the subsidence and cracks have been repaired to prevent moisture from entering the trenches,” Pollock said. “The site is currently being monitored with an on-site weather station during rain and snow storms to track moisture that may affect the site.”