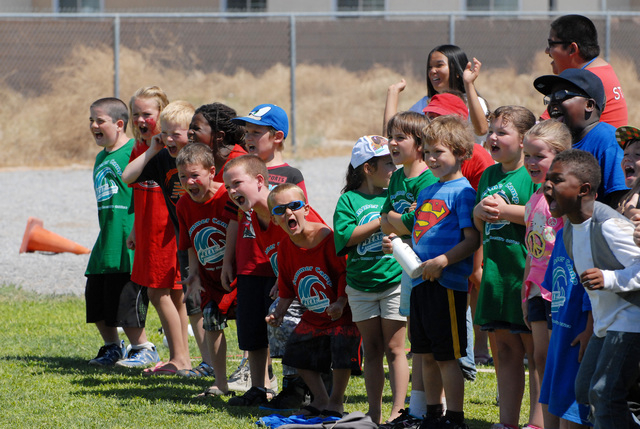 The symptoms are virtually indistinguishable from the common flu, but the infection itself can be deadly to children.

As of Friday, the Centers for Disease Control and state public health officials had documented 691 cases of Enterovirus D-68 in 46 states and the District of Columbia creating havoc for emergency room officials.

While six patients have already died from the virus, Nevada is one of only a few states that have had no reported cases.

Severe symptoms may include wheezing and difficulty in breathing.

Children with asthma may have a higher risk for severe respiratory illness caused by the EV-D68 infection.

This week, the Centers for Disease Control in Atlanta confirmed a total of 664 people from 45 states and the District of Columbia

At present, Nevada is one of a few states that has not reported a child infected with EV-D68.

Desert View Hospital’s director of pharmacy, Nicholas Del Gandio, said on Wednesday, that local parents should be mindful of their child’s hygiene practices, while watching for symptoms in the months to come.

“The problem with this enterovirus is, it usually affects the young because they really haven’t developed the immunity. Older individuals have been exposed to viruses throughout those years. There’s a natural immunity that builds up every time the body sees those viral proteins, so the elderly are really not affected by it.”

The virus develops in the mucus membranes and nasal cavities, including the lungs.

Del Gandio said it’s spread by the same means as the cold and flu, while noting that there is no vaccine or specific treatment available.

“It’s typically spread through nasal secretions, sneezing,” Del Gandio said. “Right now, there’s not much we can do about viruses, so we have to treat the symptoms. It’s best to stay at home, get lots of rest and drink plenty of fluids. If respiratory symptoms become prevalent, then that’s cause for concern.”

Since Nevada has not confirmed any EV-D68 infections at present, Del Gandio advised proper hygiene is the best way to protect children from getting sick.

“The best way to protect yourself and family is by washing hands. You should wash hands frequently with soap and water for 20 seconds,” he said. “Avoid contact with those who are sick. Do not share eating utensils or cups. Keep your home clean and disinfect frequently touched surfaces such as tabletops and doorknobs. Children should also be reminded to cover their mouths when they sneeze or cough.

Officials at the Centers for Disease Control reported that the illness has also led to muscle weakness in some children who have experienced temporary paralysis.

Additionally, the agency reported that five children who died have tested positive for the virus but it’s not known whether it caused their deaths.

Del Gandio noted that trying to identify the exact strain is not a simple task for doctors.

“There are times when diagnoses can be difficult for physicians,” Del Gandio said. “They can usually tell if it’s an enterovirus, but identifying the strain is sometimes hard to do. At this point, I would treat all illnesses vigilantly and watch for any respiratory that may develop. At the first sign of respiratory issues, I would seek medical attention immediately.”

“Our respiratory director informed me that if a child were to come to our emergency room in respiratory distress of some sort, we are able to treat them here,” she said. “If a kid comes in and it’s suspected that they have the enterovirus, it doesn’t mean that they will have to be sent over the hill to Clark County because we are well-equipped to treat the children here.”