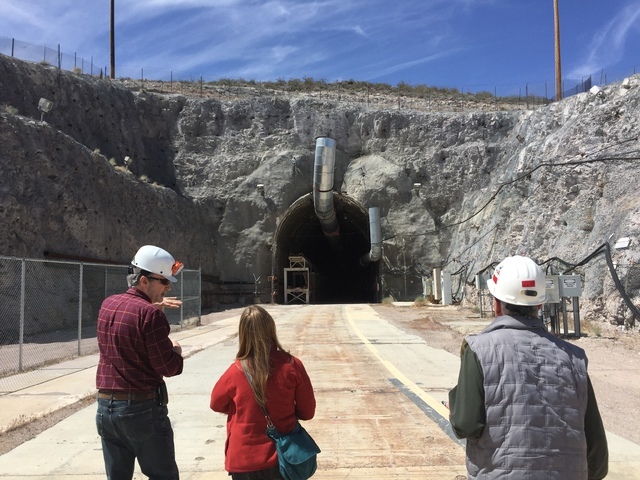 The director of the Nevada Agency for Nuclear Projects told the Las Vegas City County that the proposed Yucca Mountain nuclear waste repository site has many issues to licensing including with transportation, geology of the site and groundwater impacts. The site currently has only an exploratory tunnel, shown above, that can’t be used for storage and disposal. Arnold M. Knightly/Pahrump Valley Times

LAS VEGAS — As the U.S. Congress goes back in session in September, Nevada officials are gearing up for next turn in the Yucca Mountain saga.

Robert Halstead, director of the Nevada Agency for Nuclear Projects, outlined some of the possible scenarios for the project’s future to the Las Vegas City Council last week.

“I think when Congress comes back in September, no one is optimistic about normal appropriations bills passing, but we have had examples in the past where additional funding for a licensing came on a continuing resolution, and I don’t expect that to happen before January,” Halstead said.

In April, the House Energy and Water Subcommittee, a panel of the Appropriations Committee, passed a $37.4 billion bill that included $170 million for Yucca Mountain. The bill was defeated in the House in May.

Meanwhile, the Nuclear Regulatory Commission (NRC) that has been working on a non-adjudicatory portion of the licensing of the project, is running dry on cash.

“We expect a Nuclear Regulatory Commission to have $1 million or more, so they may go to the next phase of the law licensing proceeding, even if Congress doesn’t give them any additional funding to the NRC or DOE. It could be through a continuing resolution,” Halstead added.

The situation could also change when U.S. Sen. Harry Reid, who has been a major force behind keeping Yucca Mountain funding at bay, retires after his term ends in November.

In Nye County, some officials have long stated their support for scientific studies conducted by the county.

“Nevadans deserve after 30 years and $15 billion to have the science vetted, so that has been our position,” he added.

The state of Nevada meanwhile has 218 licensing contentions to the Yucca Mountain project, including engineered barriers such as titanium drip shields that were added to the design of Yucca Mountain to protect waste containers from corrosion.

Halstead said it would take three-to-five years to resolve these contentions in court.

“We’ve learned to live on a shoestring at the state of Nevada, we think we need about $8-10 million a year to carry our case forward,” he said.

Halstead said the state of Nevada is preparing at least 30 new licensing contentions most of which stem from NRC’s environmental impact statement supplement on groundwater impacts, if the adjudicatory part of the licensing proceeding starts.

“We have to be ready to move our issues very quickly,” Halstead said.

“And we would anticipate if there’s future funding for DOE and NRC, that the state would receive some funding, as we did in the past,” he said.

In his address to the Las Vegas City Council, Halstead also talked about challenges to Yucca Mountain licensing.

Among them he named issues with transportation, geology of the site and groundwater impacts. The site currently has only an exploratory tunnel that can’t be used for storage and disposal, he said.

If the licensing proceeding is started, Halstead said he believes the state of Nevada will defeat the license application.

“There will be some litigation on that, but I hate to say this, it could drag on for another five years and we have to be prepared for that,” he said.

In the meantime, private sector nuclear firms have developed dry canister storage for use at the existing nuclear reactors. Recently, the NRC passed regulations that acknowledged the safety of keeping the spent fuel at the reactor sites for 200 years, Halstead said.

Additionally, Waste Control Specialists, a Texas firm, filed a license application with the NRC to build an interim storage site for spent nuclear fuel at its facility near Andrews, Texas.

Halstead said in three years, the firm could have a license because unlike Yucca Mountain, it has a “good site” for storage that doesn’t have a significant population nearby, earthquake hazard or surface flooding.

“I think we will see some progress there in the next couple of years and maybe that will provide both a face-saving way for those people in Congress who committed careers to pursuing Yucca Mountain to back away from it. And that’s my hope,” he said.