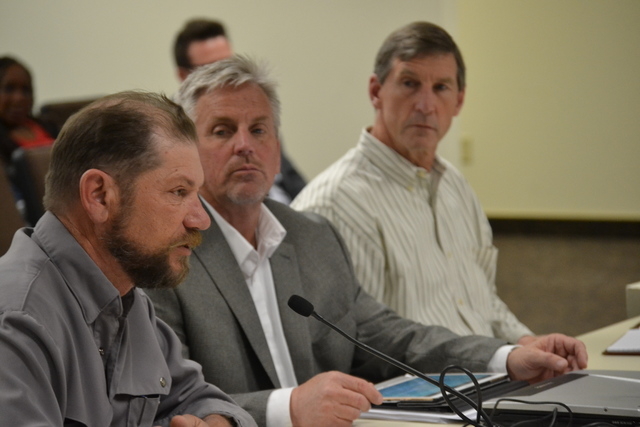 Nevada’s water boss, Jason King, is pleased with the progress that Nye County is making in crafting a groundwater management plan to address looming threats to the Pahrump water basin.

Those threats include a declining valley-floor aquifer level, deemed to be caused by over-pumping, and over-appropriated water rights by the state’s Division of Water Resources.

King attended the joint meeting of the Nye County Water District and the Pahrump Basin Groundwater Management Plan Committee on Monday, which was also well-attended by county residents.

King gave an update on changes made to proposed Senate Bills 65 and 81, which he presented to the Government Affairs Committee on Feb. 11.

King was the only one who spoke in favor of the bills, though many municipalities and special interest groups took a “neutral” position and advocated that they be permitted to join a workshop committee to amend the bills prior to a vote.

Opposition to the proposed bills came from Nye County residents, who gave testimony and submitted written comments calling on King to enforce “beneficial use” of water, as authorized by water law.

A notable change to proposed SB 65 is the means by which a county commission could charge annual fees to pay for salaries associated with persons designated by the state engineer to supervise a stressed groundwater basin.

The amended language states that those fees may also be used to pay for services associated with the implementation of a groundwater management plan in an area designated as an active or critical management area.

Under the new proposal, no longer will “any number of extensions” be permitted for proof of beneficial use of water. Instead, “an extension not to exceed one year from the expiration of the time otherwise necessary to work a forfeiture” will be allowed. A closer reading of the bills reveals that one five-year extension would be allowed and subsequent extensions of no more than one year at a time could be sought.

Nye County has endeavoured to address the projected water shortage at the local level by identifying priority items to be incorporated in a proposed groundwater plan. Some priority items have already been acted upon though the plan is not yet complete.

The water district took action Monday to implement a requirement that all new domestic wells be outfitted with meters.

Though it is not disputed that collecting information regarding water usage does not specifically address declining aquifer levels, it will provide limited data that could, at some point, be added to a layered water model, which can help guide future water usage.

Current water law allows an annual consumption of two-acre feet of water per domestic well. There has also been conversation by the district and the groundwater committee to limit new domestic well consumption to one-half acre foot; though specific action has not yet been taken on the measure.

In contrast to Nye County Water District consultant Oz Wichman’s suggestion that the groundwater plan be crafted in similar form to a senate bill, King recommended against that. King told Nye County that they have a “good start to a groundwater management plan” and there was nothing presented in the plan, so far, they he could not support.

He likewise favored a “water banking” concept pitched by Wichman as a means of bringing the basin back into balance. That imbalance, he admitted, was caused, in part, by his office over-allocating water rights. “If this banking process works, even though it goes against everything that I understand about Nevada Water Law, if it brings the basin back into balance, I say that’s fine. I’m open to that,” King said.

The “banking” concept which works by relinquishment of rights, many Nye residents say, creates extremely valuable water rights and is at the heart of the state’s “anti-speculation” law. The host of problems the concept would create, residents said, include a willful disobedience of the law.

King then turned his attention to the outcry by domestic well owners that their rights and entitlements were being ignored, and in some cases, violated by the proposals.

“Our office is being accused of some big power grab on these domestic wells,” he said. “We feel like we are here for the domestic well users.”

One thing that gets “glossed over” in conversations about domestic wells, he said, is that domestic well owners are junior water rights holders in the Pahrump basin; and, as such are subject to curtailment along with everyone else.

King also said he favored the idea of municipal wells, or utility company delivered water, over the use of domestic wells.

Whether or not the senate bills get passed, it is likely that a groundwater management plan will continue to be debated, reworked and continuously updated. A groundwater plan, King said, is meant to be a “breathing” document. “The plan has to keep moving. There has to be a steady application to get things done,” he said.

Another notable revision to proposed Senate Bill 81, is that the county commission would be able to petition the state water engineer’s office to accept its groundwater management plan.

In addition, the proposal would allow 40-percent of the water rights holders, rather than a majority, to likewise petition for acceptance of a groundwater management plan.

Of the revision, King said, “I do like the idea of a lot of this coming to the county commission and them being the focal point of who we deal with.”

The revised proposal also includes authorization for the state water engineer to rescind a designation of an active management area, if determined by the state engineer, that the designation is no longer warranted.