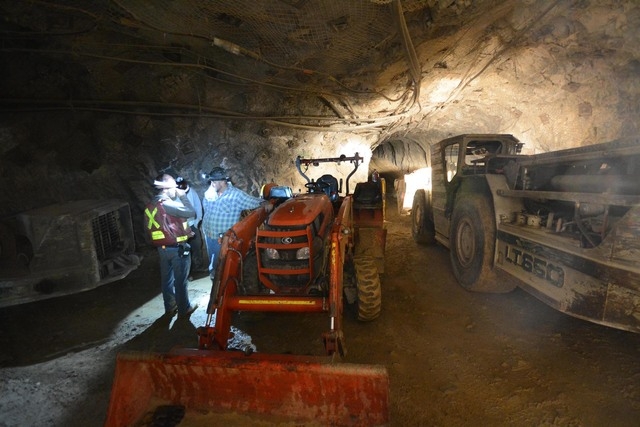 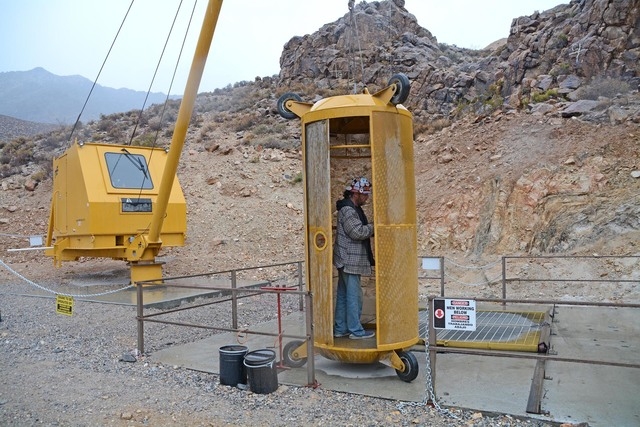 BEATTY — The life of the Sterling Gold Mine near here was projected to last only until the middle of this year, but additional, exploratory, underground drilling and an application for an open pit mine could extend that mine life three to five years, according to General Manager Chuck Stevens.

Like a lot of modern-day mining operations, parent company Imperial Metals Corporation began reworking old mines after the increase in the price of gold. The company began exploratory drilling at what was the old Saga Mine in April 2007, about 14 miles southeast of Beatty. The Saga Mine operated from 1980 to 1997 and produced 194,996 troy ounces of gold from 941,341 short tons of ore, an average grade of .217 ounces of gold per ton. The Saga Mine had both underground workings and three open pit mines.

The first gold pour at the new Sterling Gold Mine was in July 2012. Stevens said the five-year delay wasn’t due to permitting.

The gold is now being extracted in what the company calls the 144 zone, a different ore body 500 feet lower than the old mine, 3,000 to 4,000 feet under Bare Mountain. The main property consists of 683 unpatented 272 lode mining claims covering 14,109 acres on property administered by the U.S. Bureau of Land Management.

A February report from Imperial Metals estimated the 144 zone had a measured and indicated resource of 67,792 ounces of gold. The resource refers to what is in the ground, not necessarily what can be profitably mined, Stevens said.

“Overall I’d say the mine has performed well. The team of people that we’ve assembled, both experienced and those we have trained, have really come through and done an outstanding job and we are in the process, we’re continuing underground drilling efforts aimed at hopefully extending the underground life,” Stevens said. “We have an underground core drill that we own and operate and that is continually looking outside of the known reserve in an effort to identify additional mine-able deposits.”

In addition, Stevens said an application was submitted for an open pit mine to the Nevada Division of Environmental Protection and they’re waiting on scheduling to submit it to the BLM. He doesn’t think the permitting will take long, maybe six months to a year, “assuming no hiccups or major opposition,” because it is a modification to their permit.

“The open pit would be a three to five-year mine life. It would be somewhere around a 15,000-ton-per-day operation,” Stevens said. “Actually the open pit is going to go through the area that was mined from underground and open pit methods back in the ’80s and ’90s. With the price of gold where it is, the lower grade material that was left before should now be economic to mine through.”

Stevens said there are about 40 employees currently working at the mine, which is down a little from almost 50 employees, as Sterling Gold had to trim some costs to get in line with the price and the grade they were mining. Almost all the employees come from Pahrump, Beatty and Amargosa Valley, he said. There will very likely be more employees hired with an open pit operation.

It’s uncertain whether Sterling Gold will move seamlessly between the current mine operation and an open pit, without some down time and layoffs.

“Some of that will depend on the results of our exploration drilling underground. Ideally we’d like to flow right from underground into the open pit without a break. Whether or not that’s possible we can’t say right now,” Stevens said.

Sterling Gold has also worked with the Nevada Department of Wildlife to relocate herds of bighorn sheep on the nearby mountains. That includes filling water guzzlers. A volunteer organization, the Fraternity of the Desert Bighorns, is also involved.

“Because the herd is so large they’re flying them out of here and shipping them out of state,” Stevens said. “They net them on the mountain range, fly them down, then we give them a physical exam, measure them, weigh them, put them in a trailer and haul them to wherever they’re going to relocate them.”