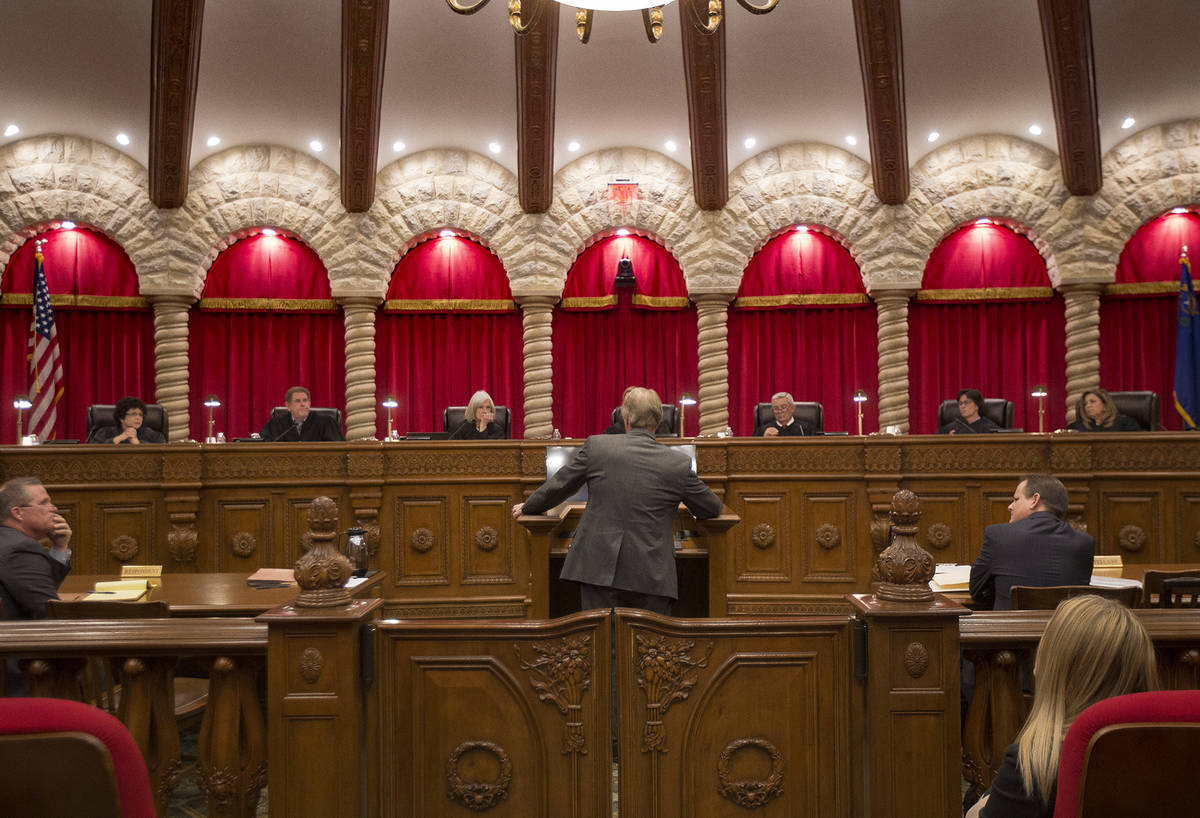 For years, people in Nevada have been arguing about the separation of powers clause in the state constitution.

Does Article 3, Section 1 really mean that anybody with a government job is ineligible to simultaneously serve as an elected member of the Legislature?

For years, cases have been filed, argued and dismissed, without a clear and final answer to that question.

But this time may be different.

There are two pending cases in Clark County ripe for an appeal to the Nevada Supreme Court, either or both of which could give justices the opportunity to finally answer the question.

The first is a case filed by the libertarian think tank Nevada Policy Research Institute against state Sen. Nicole Cannizzaro and several other public employees who serve in the Legislature. (Cannizzaro works as a chief deputy district attorney in the Clark County DA’s office.) The lawsuit was rejected in November by Judge Jim Crockett, who said the think tank lacked “standing.”

NPRI is planning to appeal, arguing that the Supreme Court itself affirmed that taxpayers have the right to sue over state spending in an unrelated 2016 case, Schwartz v. Lopez.

Certainly, NPRI meets at least two of the tests to qualify for the Schwartz exception: First, the case involves an issue of “significant public importance.” The Supreme Court wrote in a 1967 ruling that there was no more significant principle of free government than the separation of powers.

The third test is where things get tricky: The lawsuit must be a challenge to legislative spending or appropriations. NPRI can argue that the appropriation of money for public employee-legislator’s salaries qualifies, but if justices wanted to interpret the Schwartz case narrowly, they could reject the NPRI appeal on these grounds.

Still, says Robert Fellner, the think tank’s vice president and director of policy, the issue cries out for resolution. “The court has an obligation to do this kind of work,” he says.

Fellner’s stance got a big boost in November when another District Court judge — Richard Scotti — ruled in a separate case that Clark County prosecutor and state Sen. Melanie Scheible was ineligible to represent the state because of her role at the Legislature.

After Scheible secured a DUI conviction in Las Vegas Justice Court, the case was appealed to Scotti’s courtroom, where defense attorney Craig Mueller argued that the prosecution was invalid. Scotti agreed, in sweeping language: “An individual may not serve simultaneously as the law-maker and the law-enforcer of the laws of the state of Nevada,” he wrote. “Deputy District Attorney Scheible did not have the legal authority to prosecute appellant, thus the trial was a nullity.”

Wolfson says he’s confident the high court will strike down Scotti’s opinion, which is not precedent-setting. But he acknowledged that, in the wake of the Scotti decision, at least one other defense attorney is planning to argue that neither Cannizzaro nor Scheible should be allowed to try cases.

Still, when asked if those lawyers should be benched pending the outcome of the appeal, Wolfson said no. “I don’t think I should, to use your term, ‘bench’ these two prosecutors because I don’t think the court would ever … make their ruling retroactive,” he said. “We’re confident that Judge Scotti is wrong and the Supreme Court will not agree with Judge Scotti.”

(For the record, both Cannizzaro and Scheible take unpaid leave from their government jobs while serving in the biennial Legislature.)

Now, with two different conclusions by two different trial judges, with uncertainty heightened and criminal cases hanging in the balance, and with the meaning of one of the very foundational principles of government at stake, it looks as if the separation of powers will finally get its hearing before the Nevada Supreme Court. For the sake of the elected officials and the people whom they serve, let’s hope that this time around, we finally get an answer.