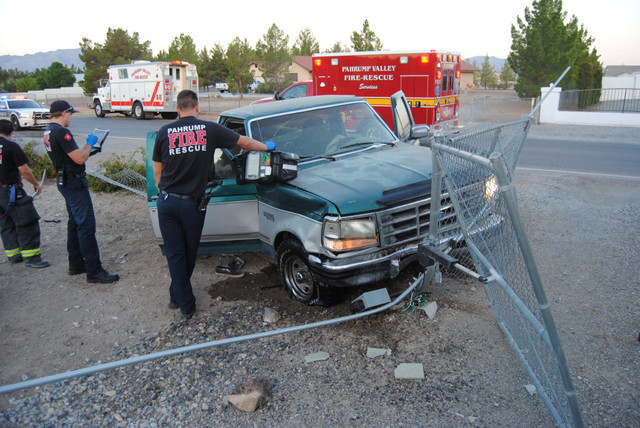 Pahrump Valley Fire and Rescue crews were dispatched to motor vehicle crash Sunday in the area of Red Rock Drive and Deer Street, where the driver of a pickup truck collided with a fence. Special to the Pahrump Valley Times

The Fourth of July holiday weekend kept first responders busy as fire crews responded to at least 50 fire-related calls over the three-day period.

It all began in the early hours of Friday morning when severe storms rolled through the valley.

Pahrump Valley Fire and Rescue Chief Scott Lewis said his department responded to 15 fire calls in 45 minutes after the storm came in from the north end of town.

During the course of that storm we had brush fires, downed power lines, and arcing electrical equipment, but we were able to cover everything, he said. It was very fast-paced, with numerous incidences occurring at the same time. People were reporting structure fires when in turn they were not, but every call was handled in a timely fashion and a lot of the brush fires were caused by lightning strikes during the course.

Lewis said his department was prepared for precipitation, but not at the severity of Fridays storm, which is believed to have caused a motorcycle accident along Highway 160, near the town of Crystal.

While responding to that location, we encountered numerous washout areas with heavy debris across Highway 160 in the Johnnie Mine area all the way into Crystal, he said. As we approached Crystal, we were unable to traverse some of the areas with normal ambulances due to the size of the debris field and rocks blocking the roadway.

With his four-wheel-drive command vehicle, Lewis was able to traverse the water and debris where he made contact with the injured rider and performed a medical assessment.

I found that he could actually safely ride in my vehicle to an awaiting medic unit approximately 200 yards away, Lewis said. It was slightly unorthodox, but necessary, due to the conditions and the fact that the storm was still active in that area. That patient needed to be transported to a hospital, as flight was not an option, due to the weather conditions.

Throughout the evening and early morning hours, Lewis said the storm also downed trees and caused power lines to arc after materials such as awnings and trampolines became airborne and flew into the lines.

We were expecting rain but nothing to that level, he said. Some people had clocked the winds in excess of 78 miles per hour in some areas. There was quite a bit of damage around the town and two of our vehicles sustained damage during the storm. One had a hose bed cover blown off the top of the truck. We had a truck out of service overnight until we could get it repaired the next morning.

Though the following day was relatively calm, Lewis said Sunday, July 3 presented numerous challenges for fire crews throughout the day as crews were dispatched to Inyo County along Highway 178 for a one-vehicle rollover crash.

The vehicle was located down in a ravine, along with the entrapment of two occupants in the car, Lewis said. They had to be rescued and brought back up to the road surface and transported to the local hospital.

While en route back to Pahrump, fire crews were dispatched for another motor vehicle crash in the area of Red Rock Drive and Deer Street, where the driver of a pickup truck collided with a fence.

This was a full-size pickup versus a perimeter fence where the vehicle had gone through the fence and lodged against a large steel gate serving as an opening from the driveway to the residence, Lewis said. The occupant was injured but declined medical transport. The Nye County Sheriffs Office is further investigating that accident.

Moments after clearing the scene, fire crews were dispatched again to the area of Highway 168 in Inyo County just east of Shoshone for a second rollover crash.

There was a question whether or not if it was someone who had viewed the first accident, but it was actually another accident involving a van, Lewis said. Crews however were canceled while en route because the Inyo County resources were in close proximity due to the first accident.

On Monday, just before the start of the Liberty Festival fireworks show, fire crews responded to a vehicle fire off Highway 160 on the Clark County side of Wheeler Pass.

The fire was visible from our Station One, Lewis said. Upon arrival they found a fully-involved vehicle where it was thought that the occupant had walked away from it and may have had some hand in the fire. BLM was in the area and arrived on location as well as BLM law enforcement.

Fire crews, Lewis said, responded to numerous brush fire reports during the course of the fireworks show at Petrack Park.

The fireworks shooters site on Gamebird Road was the scene of another vehicle fire just after 11 p.m.

Lewis noted that fireworks was not the cause of that blaze.

It was found not to be related to the fireworks shooter site, however a hot grill had been placed in the back of the pickup truck and the bed liner caught fire and thus the cargo bed caught fire, Lewis said. People in close proximity to that fire quickly extinguished it just as the fire department arrived. There were no injuries and the occupant was unaware the vehicle was on fire as he was actually out on the shooters pad.

On Tuesday, fire crews were summoned to the intersection of Irene Street and Blagg Road for a two-vehicle collision just after 9 a.m.

It was thought to be numerous vehicles involved, Lewis said. Upon arrival, crews found an offset T-bone type collision. There was no entrapment but one person was transported to the local hospital.

Also last week, fire crews responded to the area of Powerline and Mecca roads in Amargosa Valley last Tuesday, June 28 for a report of a one-vehicle rollover crash just before 11 p.m.

Upon arrival, crews did find a one-vehicle rollover accident with significant injuries, he said. Apparently the occupant had been ejected from the vehicle. Mercy Air 21 was launched to the scene and the patient was transported to UMC Trauma in critical condition.