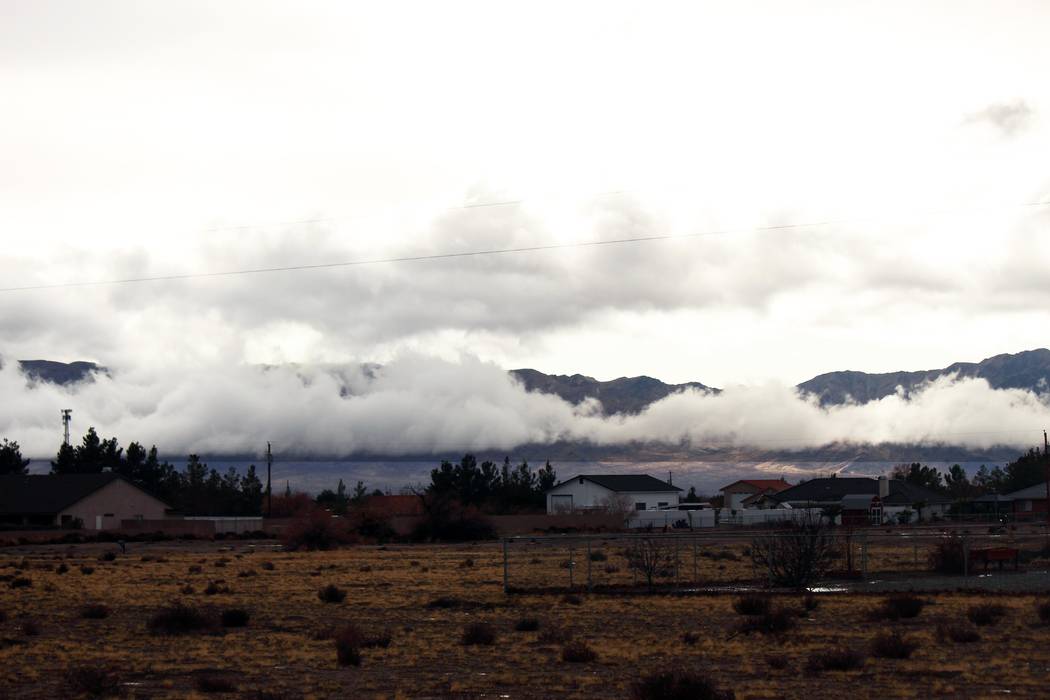 Jeffrey Meehan/Pahrump Valley Times A two-day-long storm system on Jan. 8-9 that moved into the Pahrump Valley brought just under an inch of rain to the area, along with flood advisories and road closures to some part of Death Valley National Park. A record amount of rainfall was recorded for calendar day Jan. 9 during the storm, breaking a four-decade-old record. 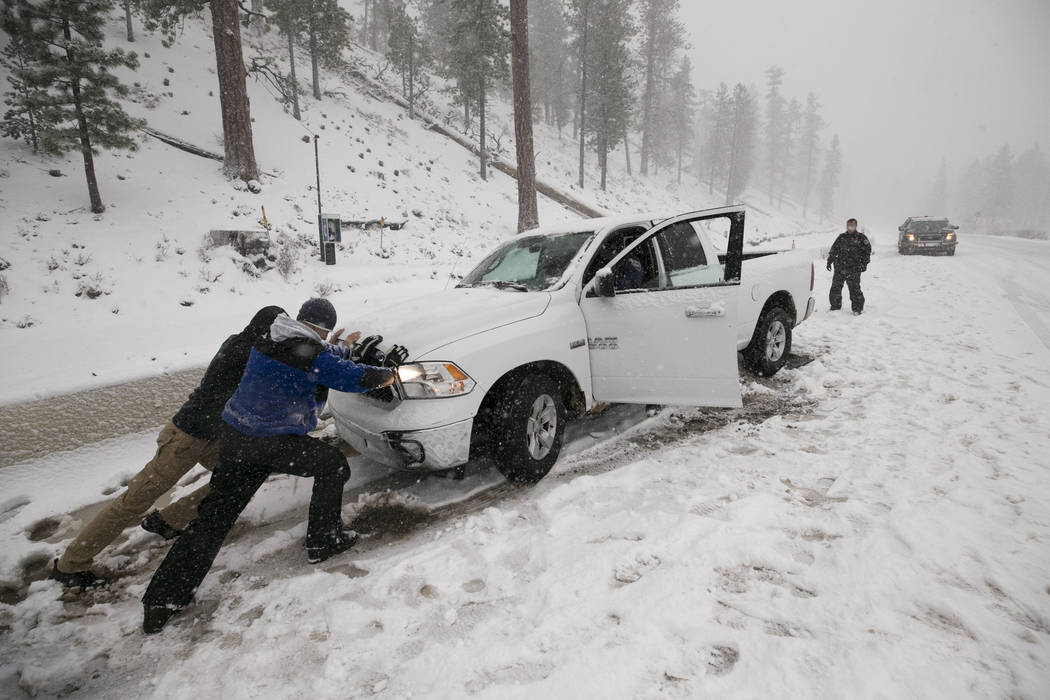 Richard Brian/Las Vegas Review-Journal Snow covers the Upper Lee Meadows in Lee Canyon outside of Las Vegas, Tuesday, Jan. 9, 2018. A winter storm warning was issued for parts of the region. 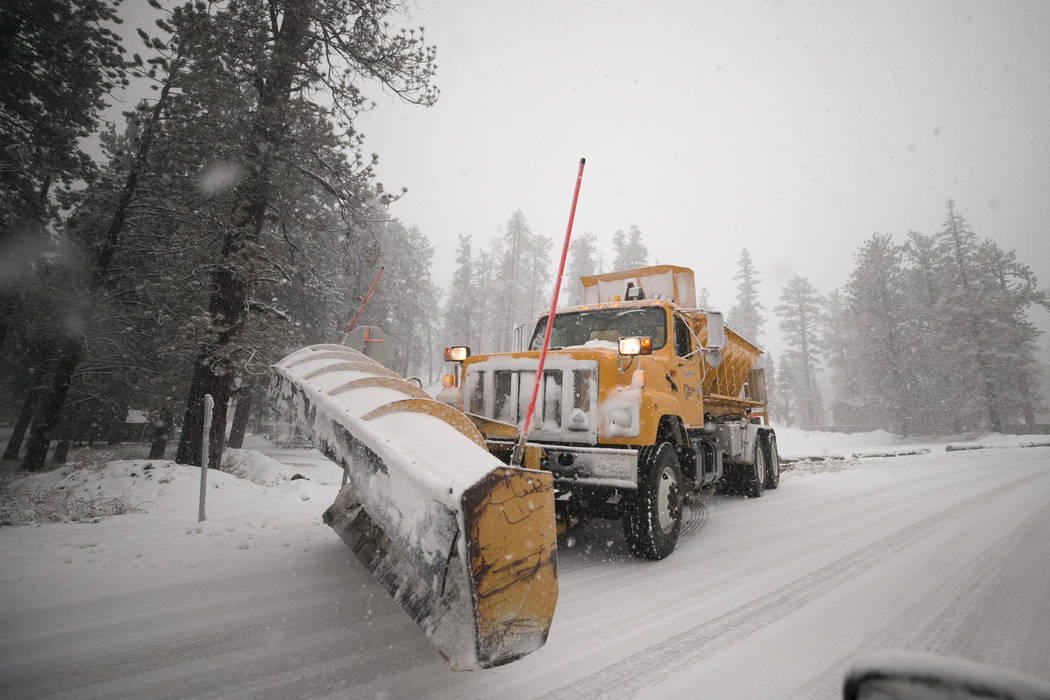 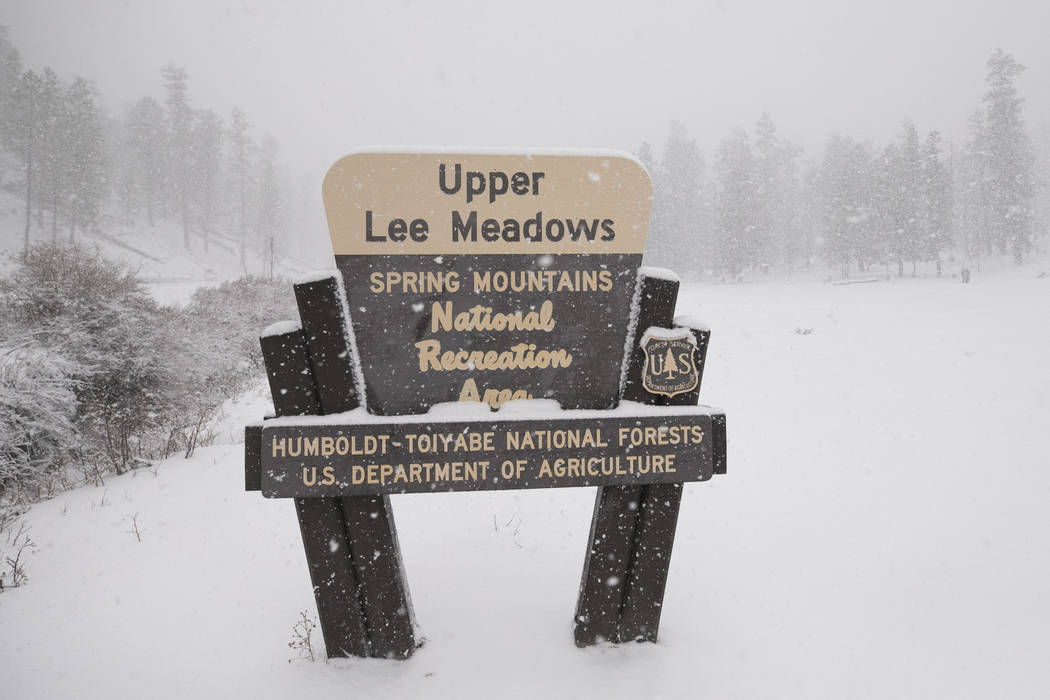 Pahrump is expected to stay dry over the next several days following a wet start of the second week of January that brought a flood advisory to the valley and many of its surrounding areas, along with road closures to parts of Death Valley.

A January storm also brought down record-setting stretches of dryness for the Pahrump Valley and brought a calendar day record for rainfall.

The National Weather Service in Las Vegas reported more than a foot of snow during a Jan. 8-9 winter storm event in Lee Canyon in elevations above 9,000 feet just before the canyon’s Ruby Cup competition, scheduled for Saturday. The annual event benefits the Nevada Donor Network.

Mount Charleston also saw snowfall with 3.3 inches during the two-day storm, though projections were much higher prior to the storm. The weather predicted 6-12 inches would fall above elevations of 7,000 feet.

The valley’s record-setting 116-day dearth of wet weather was also interrupted by over a quarter-inch of rainfall accumulating on the valley floor on Jan. 8 — with over a half-inch falling on Jan. 9.

Flood advisories were sent out by the weather service on Pahrump and other surrounding areas including Shoshone, Indian Springs, Amargosa Valley and Death Valley Junction.

On social media, Mike Mecredy commented on a National Weather Service Facebook post about flood advisories that he’d seen ducks floating next to Dahlia Street, which sits to the south of the Pahrump Walmart.

In Death Valley National Park, several road closures occurred and were likely going to be closed for a few days, said Chris Outler, a meteorologist at the National Weather Service in Las Vegas, in a Wednesday phone interview.

Temperatures are expected to be in the mid-60s or higher through Tuesday with no expected rainfall for Pahrump, according to Outler.

Nighttime temperatures could get down to just below the mid-30s, according to the weather service.

The storms brought down a nearly 40-year-old daily record for Jan. 9 in the Pahrump Valley when 0.64 of an inch of rainfall accumulated in town, according to the weather service’s website.

The highest precipitation accumulation record on Jan. 9 for previous years has stood since 1979, when 0.38 of an inch fell in Pahrump, according to data from the weather service’s website.

Still, the rainfall total on Jan. 9 was just over half of the wettest day on record in the month of January.

The normal precipitation for Jan. 9 is 0.23 of an inch, with Jan. 8 at 0.20, for the Pahrump area, according to information on the weather service’s website.

The storms accumulated totals for the Pahrump area of just about 0.87 of an inch was also equitable to about 18 percent of the average annual rainfall in the valley. The annual mean sits at about 4.9 inches, according to the weather service.

Las Vegas also saw record-setting weather with the storm system that moved in on Jan. 8. With 1.33 inches of rainfall coming to Las Vegas on Jan. 9, it was the wettest non-monsoon day in history, along with being the wettest January day on record.

On top of that, Jan. 9 also became the sixth wettest calendar day in history.

The Las Vegas Valley had a total of 1.47 inches from the storm system that hit on Jan. 8-9.