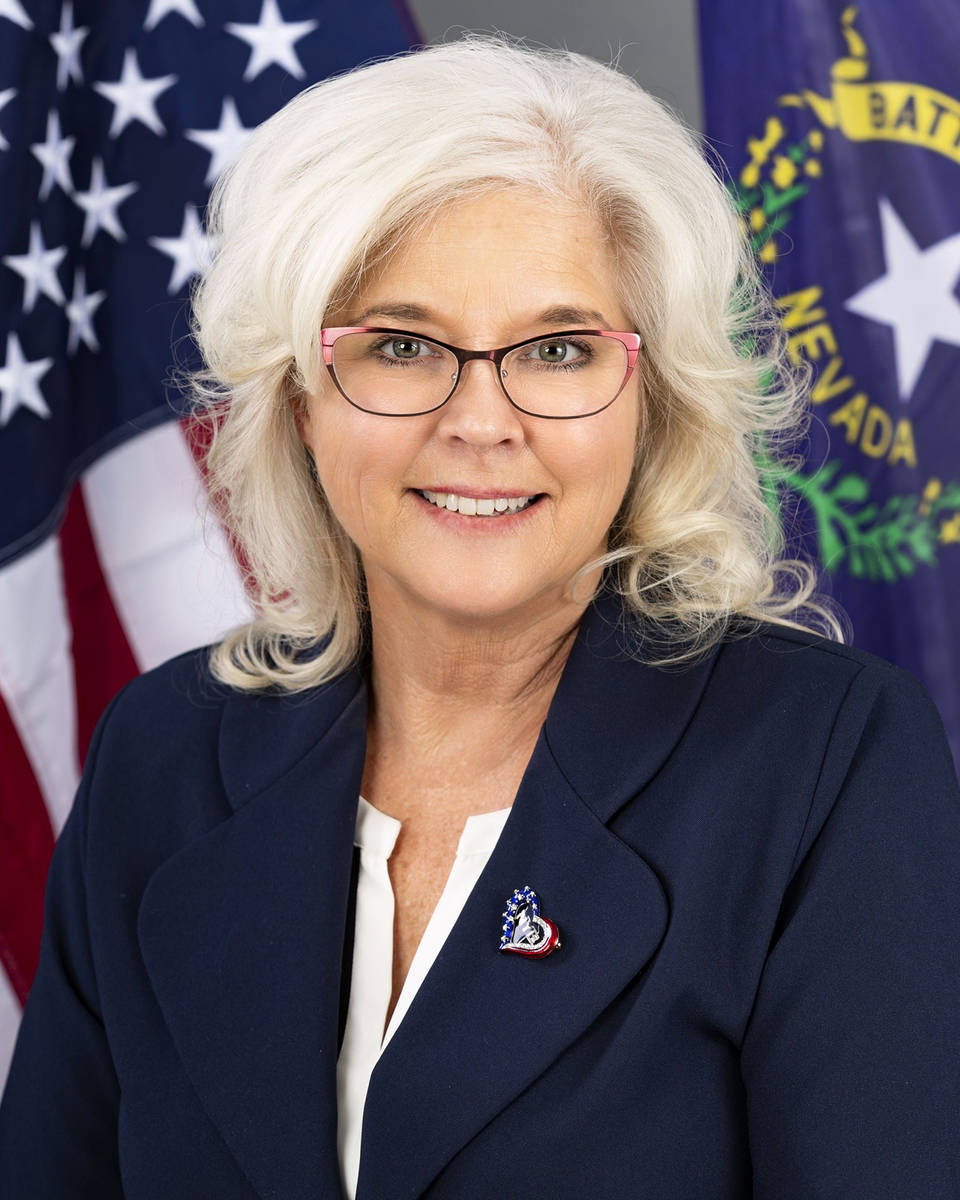 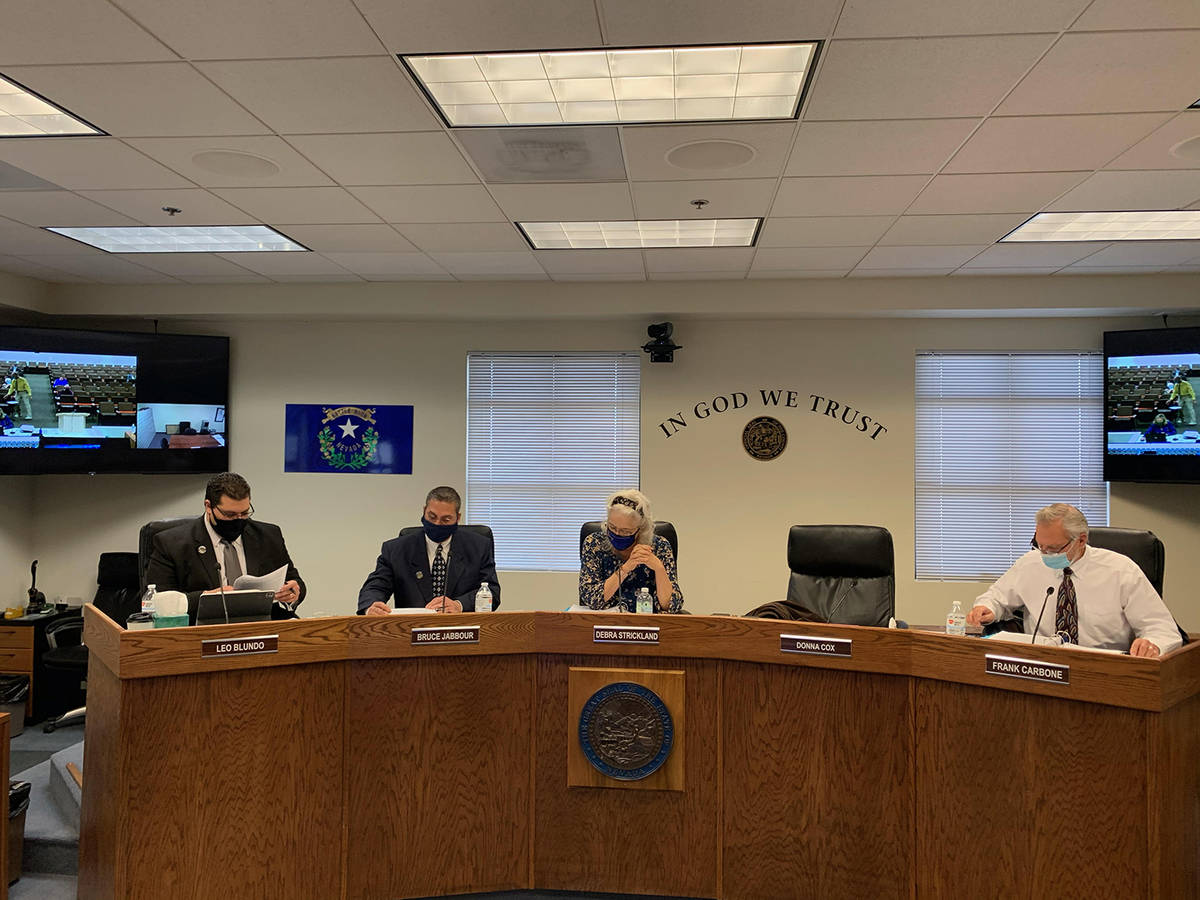 It’s a new year and a new board, with two incoming Nye County commissioners officially taking up their posts on the board for their first meeting on Jan. 4.

The first item of business at that meeting was the selection of new chairs and vice chairs for the commission , and for two of the other boards for which commissioners are the representatives, the Nye County Licensing and Liquor Board and the Nye County Board of Highway Commissioners .

The election of a chair for the commission does not generally come with much public comment but this year, the item drew three speakers, one of whom, Diane Southworth, stated her support for Strickland while two others, Mark Kampf and Robert Thomas III, threw their support behind another option, declaring that they felt Nye County Commissioner Leo Blundo would make the better chair.

In response, Jabbour said he did not intend any disrespect but in his professional experience in the corporate world, he was used to seeing the vice chair succeed to the position of chair.

Blundo thanked the public for backing him and then took a moment to remind the board of the fact that he had nominated Strickland for chair last year and she refused the position. “So, in my opinion, I think you had the opportunity. It was your choice. I just don’t like holding up the line, I think in this position, every commissioner should have the opportunity to be chair, it should always be moving,” Blundo asserted.

Cox added that she felt Strickland had done a good job as vice chair of the commission, telling Strickland, “I think you’ve learned and you’ve grown and your heart is in the right place. I think you’re open and you’re going to be open to a lot of suggestions from other commissioners, so that you’re not just running a one-man show. I don’t mean that to degrade anybody else but it is very important that you be part of the whole crew and that we all get our voice and opinion.”

Strickland then attempted to make a few comments of her own but her statements were being interrupted by a conversation in the District Attorney’s Office, which was attending the meeting via teleconference and had apparently not muted their microphone. Soldiering through that awkward moment, Strickland continued on, speaking over the interruption.

“Faith is the most important thing, my family and then this county. Everything else comes behind those things. And that is how I have been operating since I became a commissioner,” Strickland said. “And yes, I have been learning along the way and it’s not easy, but the most important thing we have to do is be a team. We can get some serious things done. We’ve got more opportunity right now than commissioners before us have ever had and yet, we have a lot of challenges too. We can do this and we do a fine job of it. We already have! This last two years was amazing.”

The motion to select Strickland as chair of the commission passed unanimously.

For the election of the vice chair of the commission, Cox motioned for Carbone to take that spot, with a second from Jabbour. Public comment was offered on this item as well, with Pat Minshall, Ammie Nelson and Herman Lewis all remarking that they were quite pleased with the idea of Carbone taking the vice chair seat. The motion to pick Carbone passed 5-0.

Next up was the election of the chair for the Nye County Board of Highway Commissioners. For the past two years Blundo, who campaigned on a platform of roadway improvements in the county and has been steadily pursuing that end, has headed the highway commission. He was selected once again as chair for the next year. The nomination was made by Carbone, who remarked that he felt Blundo had been doing excellent work as chair of that sub-entity of Nye County. “As far as I am concerned, he’s done a great job there,” Carbone said, then turning to Blundo he added, “I really appreciated the work you’ve been doing.”

The nomination quickly drew two seconds from the commissioners and passed unanimously.

Commissioner Debra Strickland made a nomination for Jabbour for the Nye County Board of Highway Commissioners.

“I’d like to switch it up a little bit. I think we need some eyes in the north,” Strickland stated. Her motion to select Jabbour also passed with all in favor.

As to the Nye County Licensing and Liquor Board, which is a six-member board that includes each of the five Nye County commissioners and the Nye County sheriff, Strickland held the position of chair for the past two years. Strickland nominated Sheriff Sharon Wehrly to be the new chair for 2021, with Jabbour provided a second on the motion before the board turned to discussion. “It makes perfect sense, I don’t know why it hasn’t been done before,” Strickland remarked. “I think it’s just a really good fit.”

Blundo on the other hand expressed his concern with the idea of having the sheriff as head of the licensing and liquor board, citing the fact that the sheriff’s office is the entity responsible for conducting the background investigations into all those applying for a privilege license, such as a brothel license or liquor license, within the county. “No disrespect to her or any of her people, it’s just, there’s a separation of powers. They do the investigation, we do the approving. This isn’t something I can support,” Blundo said.

Jabbour jumped in to state that for himself, the concept did not seem unreasonable. “As long as they (privilege license applicants) pass their background, they move forward. So I don’t have a problem with the sheriff being the chair,” he stated.

Cox added that as Wehrly is a voting member of the licensing board, she too did not see an issue with electing Wehrly as chair. The motion to select Wehrly passed 5-1 with Blundo the sole voice against.

Wehrly then nominated Strickland to be the vice chair of the licensing and liquor board, which passed easily with all in favor.