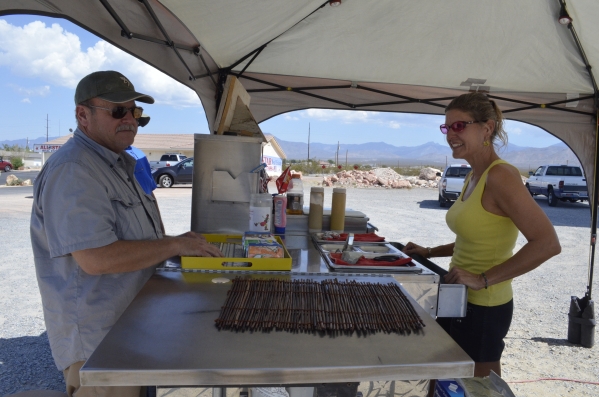 The Pahrump Regional Planning Commission on Wednesday decided to convene a subcommittee that will review proposed mobile food vending regulations after several board members and Pahrump vendors said some of the suggested changes weren’t necessary.

In a two-page document presented by the Nye County Department of Planning, officials recommended implementation of the regulations that stipulated access to land and parking for customers, health department permits and the amount of time for which a mobile food vending unit could be stationary in one location.

Pahrump mobile vendors Pete Ellis and Jeanne Wright, who were present at the meeting said they already had proper licenses and had been inspected by health departments.

“What they are trying to do is make more rules on top of more rules,” said Wright, who has been running an eponymous food vending business, Jeanne’s Hot Dogs, since January 2015. “And we are already licensed, we are already inspected by the health inspector. To put in place that you can only be set up for one hour really seems ludicrous. … And I have no problem following the rules, abiding by the rules, and I think everyone should abide by the rules and having it uniform. I have no problem with that, but it should be just fair and equitable for everyone.”

Pahrump Regional Planning Commission Chairman John Koenig assailed proposed regulations and said not all of them could be needed.

“I think we need some of this,” Koenig said. “I’m not arguing that we don’t need this at all. I’m arguing we don’t need a lot of it, but some of it, that could be (needed). For instance, definition of the home office or mobile food vending business, it’s in our purview. It fits with home occupation, home business.”

While Nye County doesn’t have regulations specific to mobile vendors, county Planner Beth Lee said the proposed amendment is the first step in addressing the topic and starting that dialogue between staff and commissioners, mobile vendors and restaurant owners and operators.

“Because of some of the complaints the department has received, it’s become obvious (that) this is a growing sector that needs our attention and does need to be addressed,” Lee said. “But in addressing this activity, it is time to put into place some guidelines which can offer some predictability. Predictability for the mobile food vendors, so they know what they are going to be required to do in coming here and operating in Pahrump but also predictability for some of the brick-and-mortar restaurant establishments we already have operating in our community.”

While Nye County is currently silent on food vending, Lee said such neighboring jurisdictions as Henderson and North Las Vegas have rigid restrictions on mobile vendors.

“So our neighboring jurisdictions, Clark County, Henderson, North Las Vegas, Washoe County, Reno and Sparks all regulate mobile food vendors. They all require business licenses they renew annually and they all require compliance with the health district regulations and requirements. And these are all things that we are interested in doing as well.”

Wright said that there are already a lot of hoops to jump through to start a business in Pahrump.

“You have to go to the town planning and building department, the town office, you have to get a state business license, you have to get insured, you have to get a health inspection, there’s just a lot to it, but it’s not a problem. I followed all the rules and now they are just trying to change up rules (and) add more rules mid-stream. So, we just need to make sure it’s fair for everyone.”

The subcommittee consisting of Wright, Ellis and three members of the commission will rework the proposed document and try to come back with a document that will be “acceptable” to the vast majority, officials said.