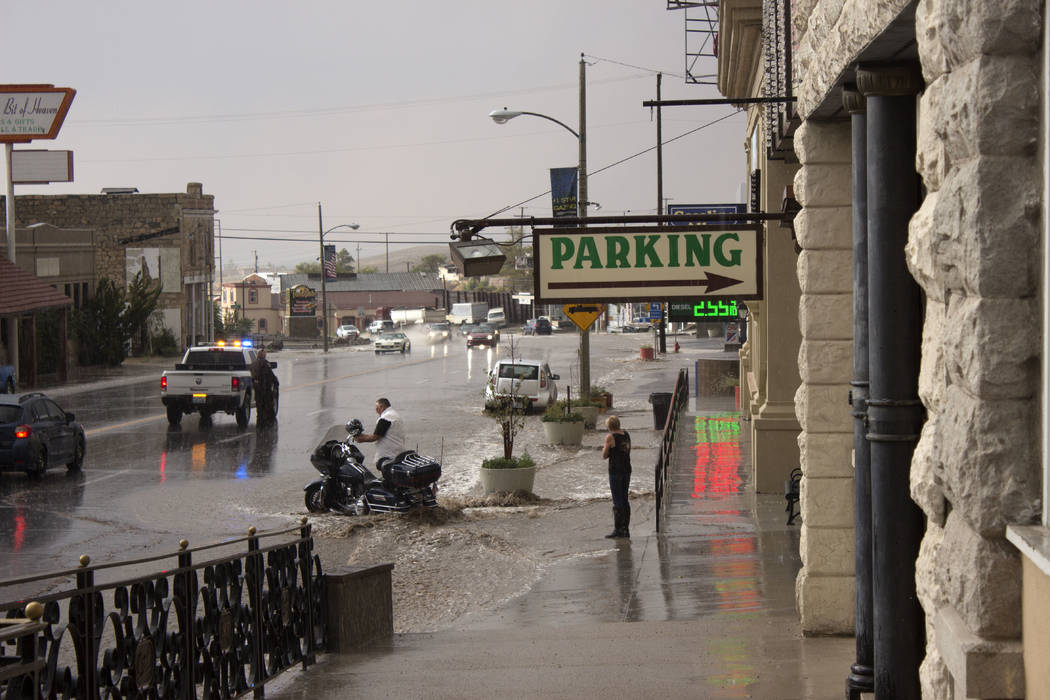 Jeffrey Meehan/Pahrump Valley Times Nevada Highway Patrol officer stops to pick up debris along U.S. Highway 95 where a stranded motorcyclist waits for flood waters to recede on Aug. 4 in the early evening near the Mizpah Hotel. Nearly a quarter-inch of rain fell for the day, with 0.15 of an inch falling between 5 p.m. and 6 p.m. 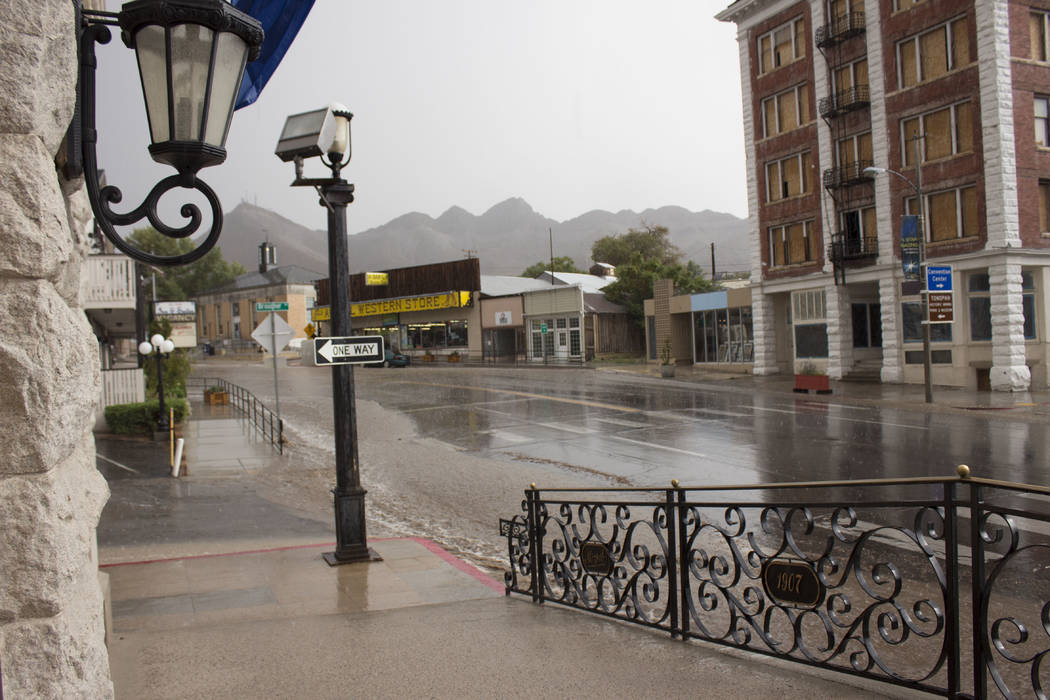 Jeffrey Meehan/Pahrump Valley Times Flood waters build up on U.S. Highway 95 in Tonopah in front of the Mizpah Hotel on Aug. 4. 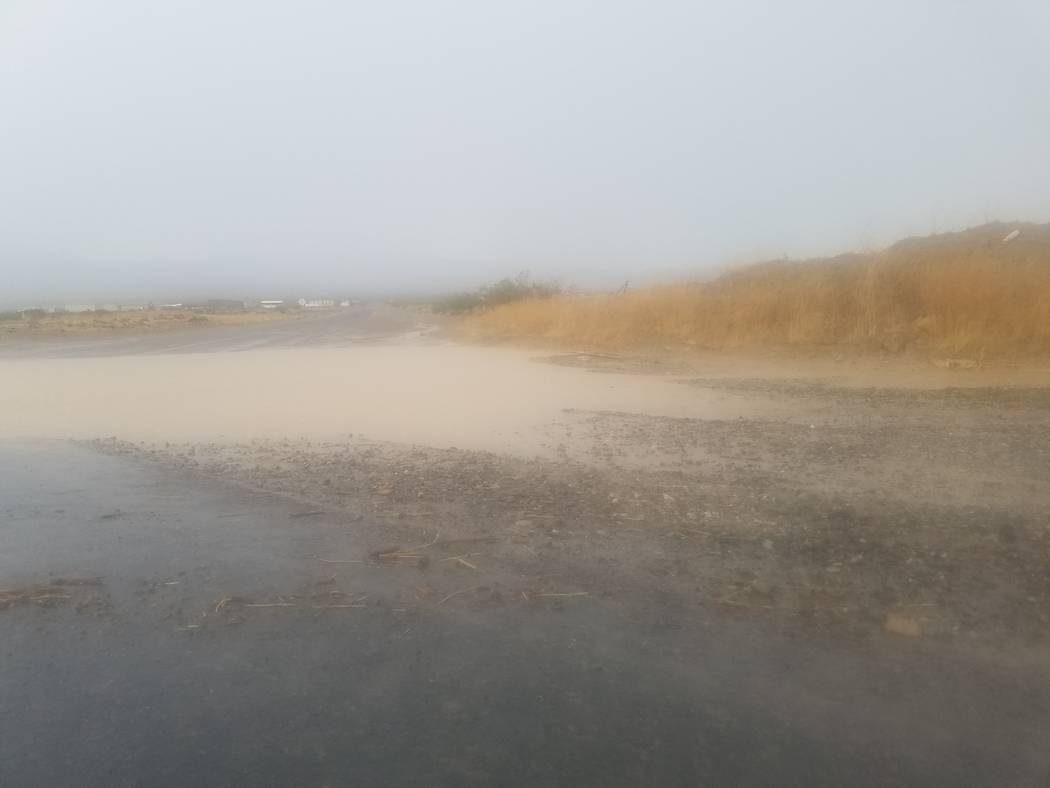 Standing water at Bell Vista Road and Highway 160 in Pahrump. Several local streets were damaged during the afternoon storm on Aug. 4, with road crews working on them into next week.

The town of Pahrump saw damaged streets and road closures throughout the local and regional area during the Aug. 4 storm.

On the northeast side of Pahrump, Nye County road crews will be repairing flood-damaged roads (washed-out driveways and roadway shoulders), according to a Nye County spokesman.

The damaged areas were between Mesquite Road and North Leslie Street, east of Highway 160 in Pahrump.

Other damaged areas in Pahrump include Park Retiro road.

Repairs on several of the areas in Pahrump began on Tuesday, according to a Nye County spokesman.

A report from the National Weather Service station in Las Vegas pointed to heavy rains in the elevations such as Mt. Charleston as to the cause. In some of those areas, it was reported that nearly two inches fell, according to the weather service’s Las Vegas office.

Some of the local readings were just shy of a quarter-inch of precipitation.

That was from a personal weather station reading, said a spokesman from the weather service’s Las Vegas office.

According to information on the Nye County Sheriff’s Facebook page, the area of Highway 160 and U.S. Highway 95 was impassable around 4:30 p.m.

Other closures were Highway 160 and Tecopa Road and Highway 373 and Mecca Road in Amargosa Valley.

Tonopah and Goldfield also got their share of heavy rains.

Motorists and motorcyclists found themselves stranded near the Mizpah Hotel at 100 N. Main St. in the early evening hours of Aug. 4. The historic hotel sits along U.S. Highway 95 and Brougher Avenue.

The effects of storms in the area were also felt in Goldfield, where the community was hosting its annual Goldfield Days event.

Jeremy Daeseleer, who owns the Hoist House Tavern at 300 N. Columbia Ave. in Goldfield, said the bar did lose power for a short period in the evening on Friday. Daeseleer said he was able to restore power quickly with the tavern’s backup generators.

The National Weather Service reported that just less than a quarter-inch of rain fell on Aug. 4 in the Tonopah area, with about 0.15 of an inch falling just before 5 p.m. and 6 p.m., according to readings at the Tonopah Airport.

A spokesman at the Elko office for the weather service said that may not have been the full force of the storm in town, as the airport sits some eight miles east of the U.S. Highway 95.

A weather service spokesman said the storm in Tonopah is typical in the summertime with monsoonal pushes. If these pushes involve a lot of moisture, they can cause flooding, the spokesman said.

It’s sporadic how much rain will be produced—some have been known to produce up to an inch of precipitation within an hour, the spokesman said.