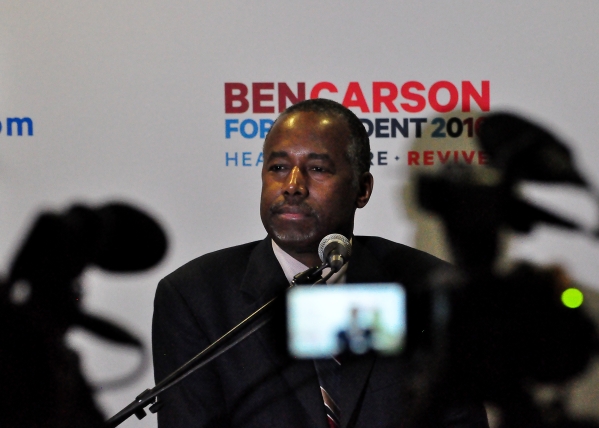 “Heal, Inspire and Revive America,” is the slogan for Ben Carson’s presidential campaign this election season.

Representatives of the retired neurosurgeon have scheduled a series of rallies in support of the contender, the first of which will be held in Pahrump tonight beginning at 6:30 p.m. inside the NyE Community Coalition’s Activity Center at 1020 E. Wilson Road. Carson will not make an appearance.

Joel Garcia, Nevada’s coalition director for the Carson campaign, said the event is designed to attract what he referred to as faith-based voters.

Participants are also invited to take part in a “mock caucus” with the hopes of inspiring residents to embrace the election process in Nevada.

The ballots, Garcia noted, will not reflect who is running for president this year, but the names inscribed will be familiar to all.

“We will have characters like Yoda, Wonder Woman, Captain America and Batman,” he said. “They will get to come up and spew the virtues of Yoda and all of the rest. We are going to have fun with it. It’s really going to be a fun event.”

Additionally, Garcia said the event is not designed exclusively for Carson supporters and attendees will actually be able to campaign.

“They can wear Carson T-shirts or Trump T-shirts or whoever their candidate is,” he said. “You can bring signs for the caucus and we will provide ballots and talk about delegates and the whole process. We just want to be able to make people comfortable with the caucus process and lift the fear factor out of it.”

The rallies, Garcia hopes, will stir up additional support for Carson.

He noted that after talking to Nevada residents, he’s learned there are too many potential voters who are not familiar with the overall election process.

“A lot of people we are calling on the phone bank say they don’t go to caucus because they don’t like it and they don’t understand it,” he said. “Obviously we can’t spend a half an hour on the phone with every caller explaining the whole thing. We feel that these rallies are going to help stir up the Carson supporters, because we took a little bit of a hit when Carson went down in the polls and we are trying to revive that at the same time. We will also try to register voters before it’s too late.”

Garcia said he’s optimistic Carson will soon surge in the polls after slipping down in recent months.

“Up in Iowa Ben Carson surged to number three and he’s only like a point and a half away from Ted Cruz,” he said. “We’re feeling that because Trump is going to bail out of the Iowa caucus for his little tantrum he’s throwing with Fox News anchor Megyn Kelly.”

To further his feelings about candidate Donald Trump, Garcia said the Carson campaign is much better organized than the billionaire’s.

“Trump doesn’t have a ground game like Ted Cruz and we do,” he said. “We have people on the ground working every day, by going house to house and making phone calls. Trump doesn’t have that apparatus, he’s just depending on his money and maybe commercials and just his current populist appeal right now. That can only go so far.”

Additionally, Garcia said Carson’s appeal in the Silver State was reflected during a campaign stop in November.

He filled up the Pahrump Nugget Event Center,” he said. “Rand Paul had 75 people when he showed up in Pahrump. We drew in about 400 to 500 attendees at the Nugget when Ben Carson visited.”

The Carson campaign obviously appeals to people of faith,” he said. “We are doing a series of rallies throughout Nevada and Pahrump is our first one. We will be up in Reno doing two of them next week. We will also have a city-wide event in Las Vegas where we are anticipating about 50 to 80 churches being involved with over a thousand people attending.”

Carmelo’s Italian Bistro is providing food for the event.

“Even if we get a light turnout, we are going to treat them very well,” Garcia said.