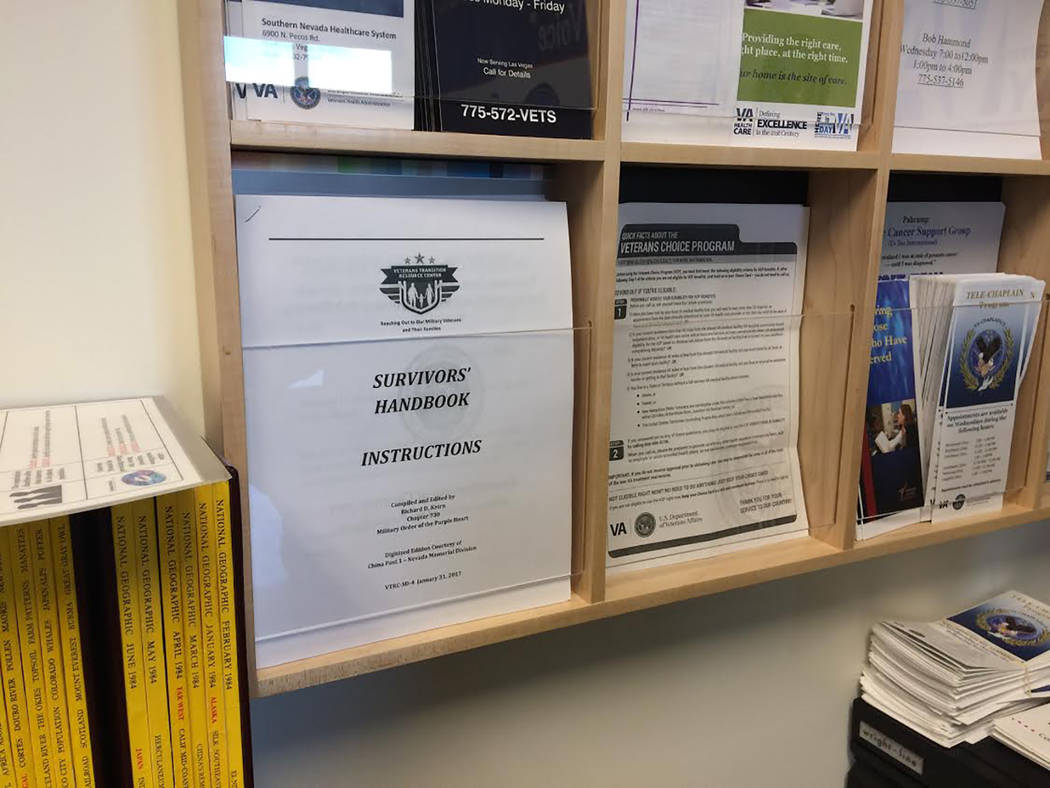 Robin Hebrock/Pahrump Valley Times The Survivors' Handbook is available to the community at the Pahrump VA Clinic at 220 Lola Lane, next to Desert View Hospital. The booklet helps former military members and their families with instructions on what to do following the death of a veteran.

The moment when a loved one passes away is the last in which residents will want to struggle to gather all of the information and documentation necessary to deal with the death.

However, for those who do not prepare beforehand, this is an unfortunate reality. When the loved one was a U.S. veteran, matters can become even more complicated.

For this reason, military members have come together to provide veteran families with a valuable tool that can help ease the strife following a loss. The Survivors’ Handbook is available absolutely free of charge to anyone wishing to brace themselves for the inevitable, preventing the compounding of grief that can be caused by a lack of preparedness.

The Survivors’ Handbook was produced by the Veterans Transition Resource Center North Las Vegas and compiled by Richard D. Keirn, a veteran, and members of the Military Order of the Purple Heart Chapter #730 out of Henderson. Through his connections with valley veteran Dr. Tom Waters and others in the Pahrump community, Keirn is helping make this handbook available to local residents.

“They are grieving at that time, they are already in an emotional tailspin and then to have to try to figure, what do I do? This is the reason that we try to encourage veterans to put it together before anything happens, so their family doesn’t have to worry about that,” Waters said in an interview. “And it’s not to say people can’t use this after a death, because there are some families that have. But the ones who take care of it, their families are much better off when the time comes.”

The Survivors Handbook contains comprehensive information and is comprised of 16 separate sections outlining topics such as key documents to keep on hand, death notification checklist, VA death benefits and service, what to do when a veteran passes away and much more.

Waters detailed his own preparations, noting that his Survivors’ Handbook has been filled out, with his driver’s license, social security number, discharge and DD214 paperwork attached, his service information, such as years of service and even household information such as bank account numbers and a list of the monthly bills.

“It’s got anything that my wife will need to know and anything the service officer will need to put everything together for her,” Waters said. “It helps these family members obtain benefits and provides contact numbers for all those entities they need to contact after a death.”

Copies of the pamphlet can be obtained in a variety of ways. Veterans and their families can stop by the Pahrump VA Clinic to pick up a handbook and for veterans organizations wishing to distribute the pamphlets themselves, digital copies can be requested via email at richard.keirn@yahoo.com.

Hard copies can be requested over the phone at 702-419-6869 or via U.S. mail at 34 Tanglewood Drive, Henderson, NV, 89012. Once a copy has been received, the handbook can be reproduced for distribution.

“We have quite a few available and as soon as we get low on them, I’ll be working to get more of them printed. I definitely want to recognize those three for helping with this,” Waters stated.