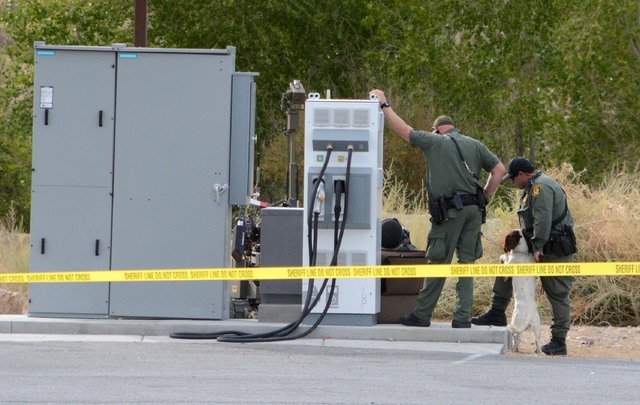 The area around Eddie World Gasoline in Beatty was cleared out Monday morning after a suspicious suitcase was found next to an electric car charging station, according to the Nye County Sheriff’s Office. Richard Stephens/Special to the Pahrump Valley Times 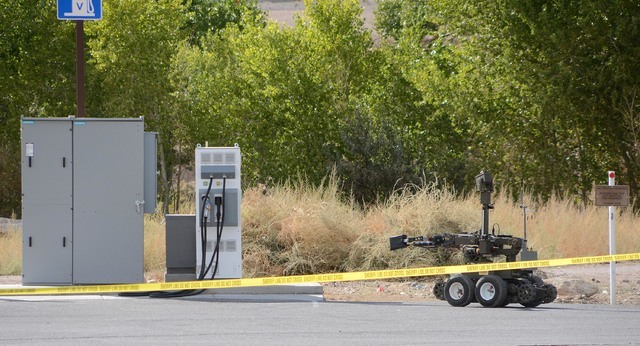 A robot was used to investigate the suspicious suitcase found at an electric car charging station near Eddie World Gasoline in Beatty. The luggage was deemed to not contain a bomb. Richard Stephens/Special to the Pahrump Valley Times

BEATTY — A popular tourist stop on U.S. Highway 95 between Pahrump and Tonopah was evacuated Monday after the discovery of a suspicious package.

The area around Eddie World Gasoline in Beatty was cleared out Monday morning after a reporting of a lone suitcase next to an electric car charging station, according to the Nye County Sheriff’s Office.

The area around Stagecoach Hotel and Casino, Eddie World, Death Valley Nut and Candy, and Motel 6 was cordoned off, their parking lots emptied as much as possible.

The all-clear was given to end the closure of the area at around 4:30 p.m. after the suitcase was opened and found to contain an unnamed individual’s personal belongings.

The sheriff’s office took possession of the suitcase and is attempting to identify the owner.

The sheriff’s office stressed that there was no explosion or injuries as a result of the situation.

“In light of the happenings in the country precautions were taken to ensure the residents of Beatty were safe,” the sheriff’s office said in a released statement.