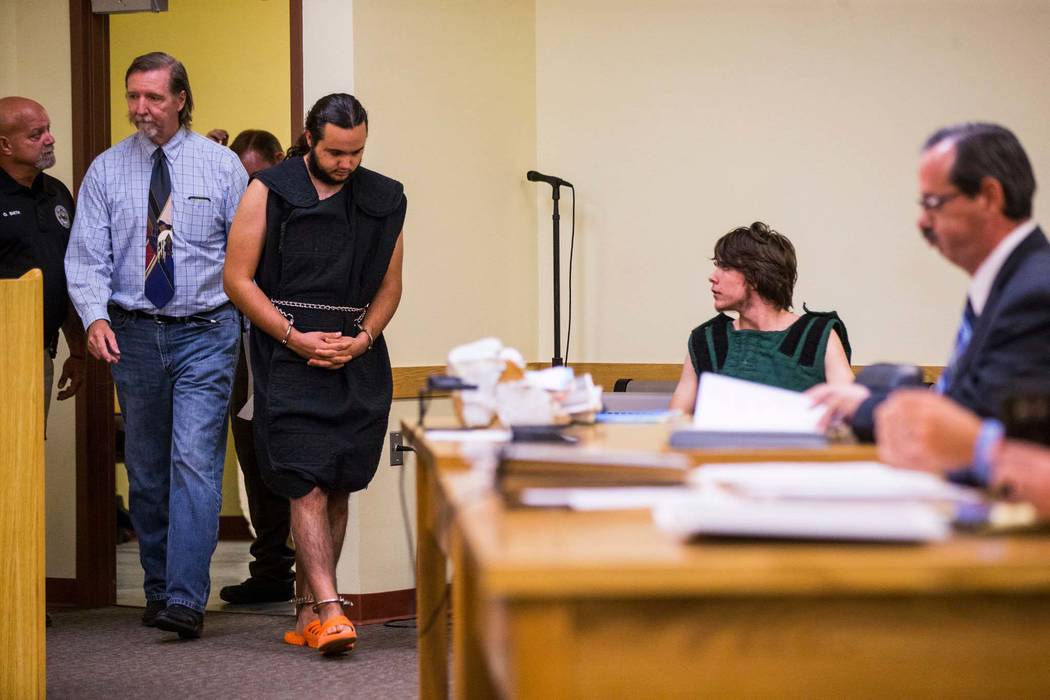 A shackled Dakota Saldivar enters the courtroom while his brother, Michael Wilson, sits at a table in Pahrump Justice Court on Thursday, Aug. 9, 2018. The 17-year-olds were in court for an arraignment on charges in the stabbing and beating death of their mother, Dawn Liebig. (Chase Stevens/Las Vegas Review-Journal) 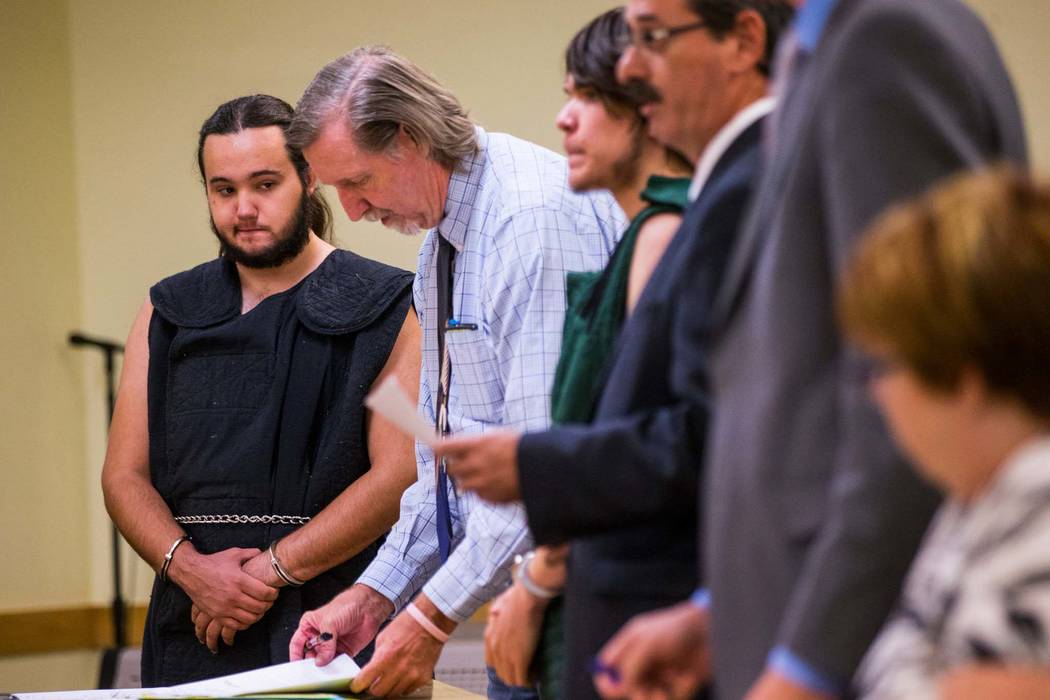 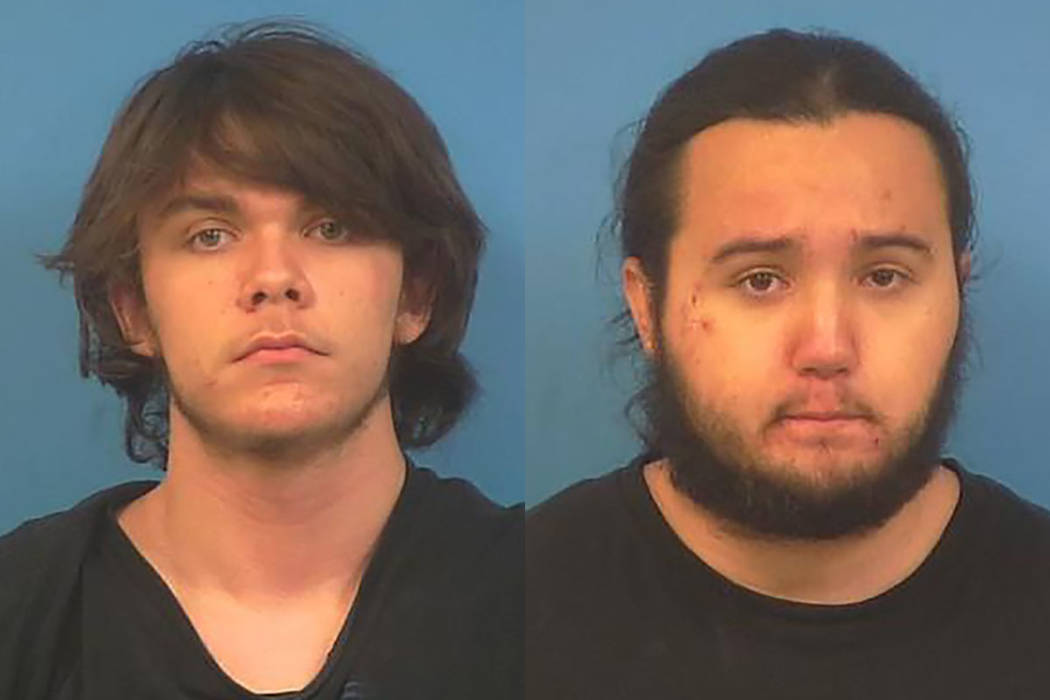 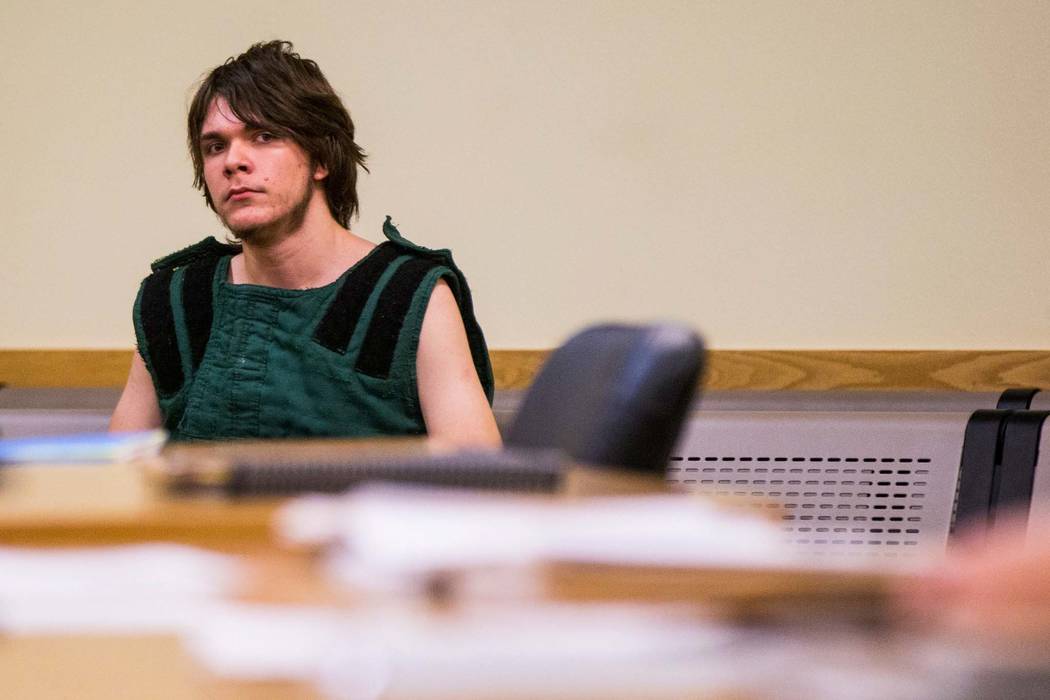 Dakota Saldivar and Michael Wilson, both 17, appeared in Pahrump Justice Court court Thursday, shackled next to each other and stoic in their dark blue smocks.

Wilson hid under shaggy, brown bangs while Saldivar’s dark hair was pulled into a ponytail snaking halfway down his back. Their arraignment lasted only minutes as Justice of the Peace Margaret Whittaker scheduled a preliminary hearing for Aug. 30.

The killing was detailed in the teens’ arrest reports, obtained Thursday by the Las Vegas Review-Journal.

Saldivar “admitted that he and Michael Wilson murdered Dawn, because they couldn’t take her complaining, and justified by saying that she wanted to be with her deceased sister,” the reports said.

The brothers repeatedly walked into their living room that night at 6381 Wedgewood St., waiting for their 46-year-old mother to fall asleep.

Their plan was to kill her fast by stabbing her in the jugular vein, according to their arrest reports.

But it didn’t go as planned.

“Saldivar indicated that the ordeal lasted 25 minutes, which included Dawn fighting back,” according to the reports.

Wilson told detectives that he stabbed his mother once in the neck and Saldivar stabbed her multiple times in the neck. Saldivar said he struck her in the head with a hammer about 20 times.

The victim called out for her sons to help, according to the reports, not realizing that they were the ones attacking her.

On July 31, after Liebig was reported missing, detectives went to her home and interviewed her sons.

Wilson and Saldivar initially denied knowing what had happened to their mother. After viewing text messages on both suspects’ cellphones, detectives interviewed Wilson again.

According to the arrest reports, Wilson then described how he and his brother had killed their mother. He described how they put her body in her 2001 Ford Explorer, drove it to the mountains and buried it 2 feet underground.

Wilson also showed detectives and sheriff’s deputies where his mother’s body was buried, according to the reports. He told investigators he had been legally adopted by Liebig and had been living with her for about five years.

After obtaining a search warrant for the residence, investigators found about 20 malnourished cats with no food.

Saldivar’s attorney, Harry Gensler, said Thursday that he was appointed to the case last week.

“He’s scared,” he said of his client. “It’s just very sketchy so far. All I know is what I’ve read in the paper.”

The brothers faces charges of murder with a deadly weapon, conspiracy to commit murder, destroying evidence, conspiracy to destroy evidence and two counts of being an accessory to murder.