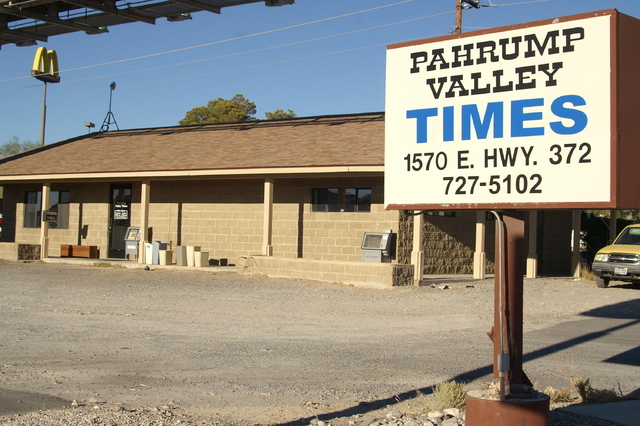 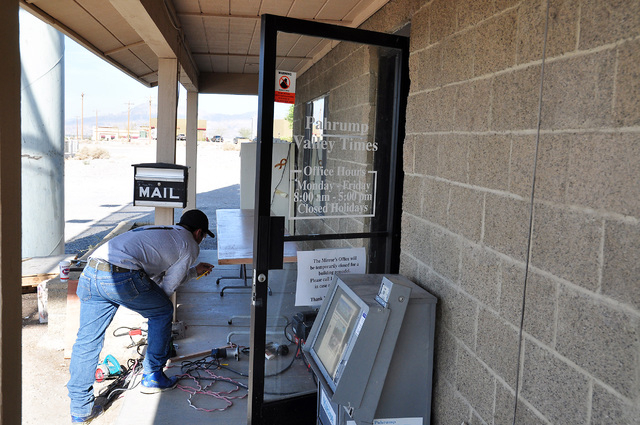 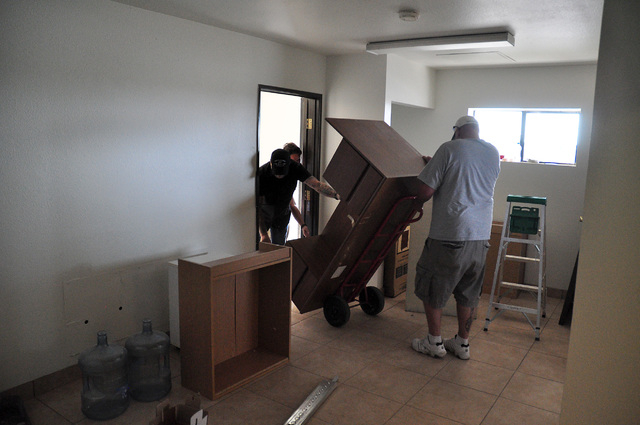 The Pahrump Valley Times has a new home.

After nearly two decades of renting on East Calvada Boulevard, the newspaper bought the building at 1570 W. Highway 372, a block off Highway 160 behind Bank of America.

Interestingly, the new office is where the Pahrump Mirror was published for many years.

The move came quickly, with the phones shut off on Friday and furniture moving during the weekend.

“I had about six people that moved the heavy stuff and a few high school kids with other items,” Times Publisher Marie Wujek said. “It worked out okay.”

Front office employee Mary Ann Yorke, who has worked at the newspaper for 14 years, said she and the other front office staff are settling in quite nicely.

However, the new building is not as spacious as the old building, which used to house a bigger staff in years past.

“Size was definitely an issue but it’s nice and freshly painted with new floors,” she said. “It’s like moving in to a brand new space. Once we get everything out together, it’s going to be nice and cozy.”

The editorial staff now occupies an area less than half the size of the old office, but everyone seems to be taking the move in stride.

“I think it’s a good move for the Pahrump Valley Times,” said Vern Hee, sports editor. “We are much more in the center of town. The place may be smaller but in the end it will work out for us.”

While newspapers across the nation are being closed or sold, Community Editor Charlene Dean said the purchase of the building shows long-term commitment to the readers of the Times.

“Stephens Media has made an investment in the Pahrump Valley Times and the community,” Dean said.

Beyond the building purchase, the facility was remodeled top to bottom, including a fresh coat of paint and a new roof. Stephens Media, which owns the Pahrump Valley Times as well as the Las Vegas Review-Journal, sent IT workers from Las Vegas to transfer computers and phones during the weekend.

The new offices are located in the heart of town, making it convenient when chasing down breaking news stories around the community.

The move wasn’t easy for many employees who had to throw away large amounts of paper kept over the decades. Many work spaces also shrank. Wujek said unfortunately not everything in the old office could fit in the new confines.

“We are very cozy and we did a lot of remodeling of the building,” Wujek said. “It’s going to work out just fine for all of us and it will be onward, business as usual. We just needed to get out of the old building and Stephens Media purchased the building. It’s definitely better.”

Much to the delight of the staff, there are numerous fast food establishments within walking distance and there’s a convenience store just a stone’s throw away.

“Not only is it closer to my house, it’s closer to food,” Yorke said. “We were very limited on the places we could order out and now we’ve got McDonald’s, KFC, and a lot of good place right in this location.”

As the Pahrump Valley Times settles into its new location, a few goodbyes are in order:

Goodbye to the rear parking lot where many a cigarette breaks took place while watching cars drive the wrong way along Calvada Boulevard at least once a month.

Goodbye to the solitude of the Calvada duck pond where many interviews took place at the picnic tables right across the street from the office.

Goodbye to all of the joyous laughter and interesting conversations in the front office as we now have a door enclosing the newsroom.

Goodbye to that squeaky hinge on the door of the ladies room that made the familiar sound to all in the office.

Goodbye asphalt parking lot and hello to a new beginning for the newspaper of record for Nye County.

With the purchase of the building, Stephens Media acquired The Mirror. Plans have The Mirror continuing its weekly printing schedule and occupying office space in the building.