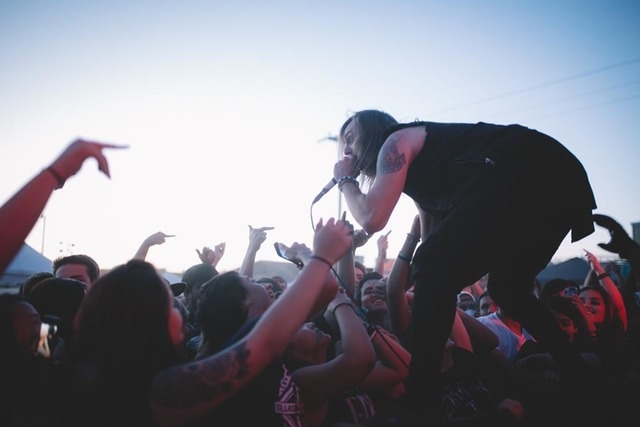 A good chunk of those in attendance were from over the hump in Las Vegas, as Threadz Clothing Co. owner Nick Moore found out while monitoring the internet for feedback after the event.

“A lot of the social media feedback has been coming from Vegas,” he said. “So it wouldn’t be scarce to say 25 percent.”

The festival was filled with hard rock bands that also included, Before Giants, Pahrump’s own I Am Of Terra, From Where We Came, and Leave This World Blind.

Making its return after a two-year absence, event organizer Moore explained the festival came together in a short time span.

“This lineup was coming up and I got a phone call, and we put it together kind of last minute and it was a good time.”

Despite arranging the show in relatively quick fashion, the festival saw around 700 attendees, made up of mostly teenagers and 20-somethings, enjoying the tunes.

Moore said it was a mix of timing and an attempt to fill the void of a similar event that usually takes place this time of year in Las Vegas being canceled.

“We haven’t done ThreadzFest in a few years, or any sort of concert series, and with spring break happening for us and Clark County’s ending, and the demise of Extreme Thing in Las Vegas, we just had a good opportunity,” Moore said.

In addition to all the acts, there were 12 vendors on hand to handle the refreshment side of things for the festival goers who worked up a sweat while crashing around in the mosh pit.

The title sponsor of the event, XPOZ, the Southern Nevada Health District’s tobacco prevention coalition, was there to spread the word to stay smoke-free.

With a higher rate of smokers in Nye County than the state average, education on the subject is key to keeping teens and young adults from lighting up.

“They’re always looking at trying to get to the youth in all counties,” Moore said. “In Nye County we don’t have health district out here, so the Southern Nevada Health District tries to cover Nye as well, but they don’t get many opportunities to do that kind of promotion without events like this.”

The music itself was a hit with the crowd, with headliners, Crown the Empire, blasting out an hour-long set, closing down ThreadzFest.

Moore said that there were no negative incidents during the event, so with the success of this year’s ThreadzFest, he’s is already looking to similar events like it in the near future.

“I’ve done quite a few events in my life and this was probably the most seamless event we’ve ever done,” Moore said. “We’re in talks right now and we possibly will do another one next year, and possibly another event toward the end of the summer season.”