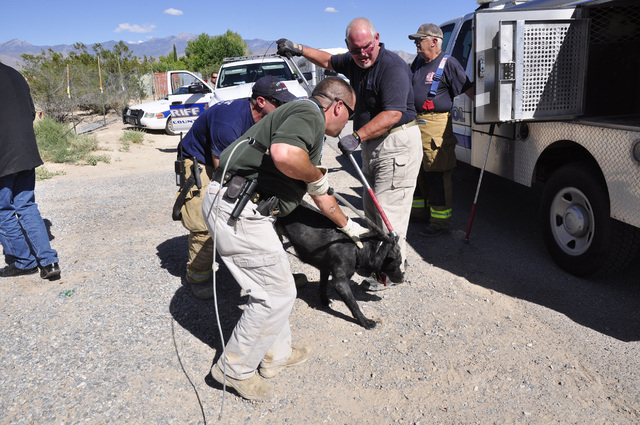 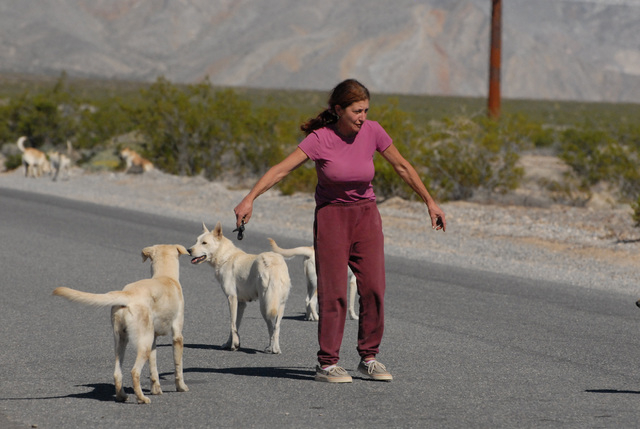 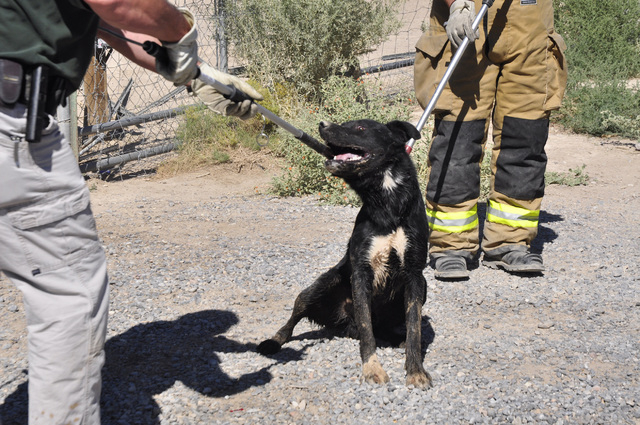 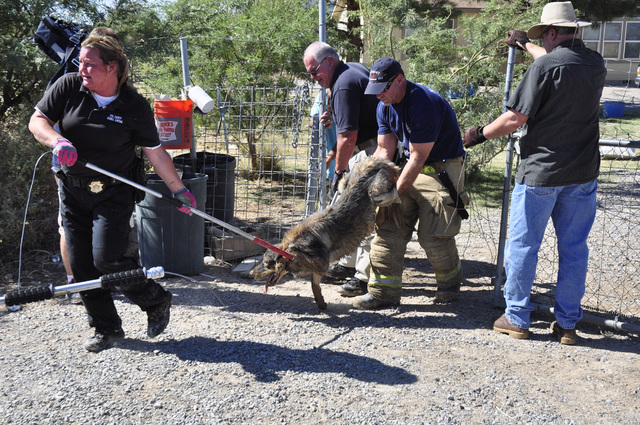 Nye County authorities served a search warrant Tuesday at the home of a local attorney, confiscating some three dozen animals that had become a nuisance to nearby residents.

Animal control officers and Nye County Sheriff’s deputies executed an operation just before 3 p.m. to seize the animals and deliver them to an area shelter.

The operation came after months of negotiations with the animals’ owner, who had already been cited numerous times.

Residents living in the area of Blagg and Stagecoach roads said they were fed up with Nancy Lord and the hoard of animals living on her property.

Salyer has been living at the same residence for more than 20 years. On Monday, he said he collected statements from other residents who wanted something done about Lord’s dogs.

“I just received five statements from the neighbors living around here who have never filled out a statement on her. That’s not including the 30 to 50 statements that have been filled out in the past two years. The sheriff’s department has been out here four times in the past two weeks. What they did, I don’t know. I do know that Nye County Animal Control has issued many, many citations to her already,” he said.

Everything changed on Tuesday afternoon when officers from Nye County Animal Control and Hazmat caravanned to Lord’s property along with sheriff’s deputies.

Nye County Emergency Services oversees animal control. Director Vance Payne said his crews were directed by the court to confiscate only enough dogs so that Lord becomes in compliance with ordinances relating to pets.

Lord refused to acquire those.

As a result, Payne said his agency had to act due to the sheer number of dogs on the property.

“In Nye County you’re allowed up to nine dogs. Two of those can be unfixed or unaltered. In this situation, we estimate somewhere between 30 to 70 dogs on this property. The owner moved some to another property that we will also address today. The judge felt that we were at a point where we had to move on this. We are removing the animals and holding them on her behalf. She is still the owner of the animals and the court will sort it all out,” he said.

Most appeared to be in good condition.

Payne noted that if Lord possessed the proper permit, and kept her animals on her own property, there would not have been a problem.

“There are different levels of permits and if you have a large enough property, and a conditional use permit through the planning department, you can have unlimited animals. When they become a threat to your neighbors, all bets are off,” Payne said.

Salyer, meanwhile, said the situation has created unnecessary stress among his neighbors.

“One of them is a diabetic and he can’t even walk the streets anymore for exercise. Our other neighbors can’t let their kids out in their own yard,” he said.

Lord told the Pahrump Valley Times Tuesday afternoon that she had problems with how the ordinances in question were drawn up.

“There are numerous defects with the five dog limit. It should have been done by the town procedurally in the postings. They changed the ordinance by making it a multi-pet permit tier two, which is a lot more reasonable than a commercial kennel permit. Because of that, I did not move on it and I’m very sorry for that today,” she said.

Lord revealed her intentions when and if all of her animals are returned.

“All I want to do is take these animals with me. I will move out of Nye County tomorrow if I could get all of my dogs back. They don’t have room in the pound for them. All of my animals are in very good condition and the animal control people acknowledged that as well,” Lord said.

Additionally, Payne said his office had made numerous attempts to avoid the situation that occurred yesterday.

“The owner of the dogs has repeatedly said she would take steps to keep the dogs on her property, but it’s been to no avail. We actually have complaints going back to two years about the dogs running at large. This is not uncommon in our valley. We always have these incorrigible dogs who seem to be escape artists. The difference with this situation is the sheer number of dogs. She is in violation of Title 6 in several different areas, but the process is dreadfully slow,” he said.