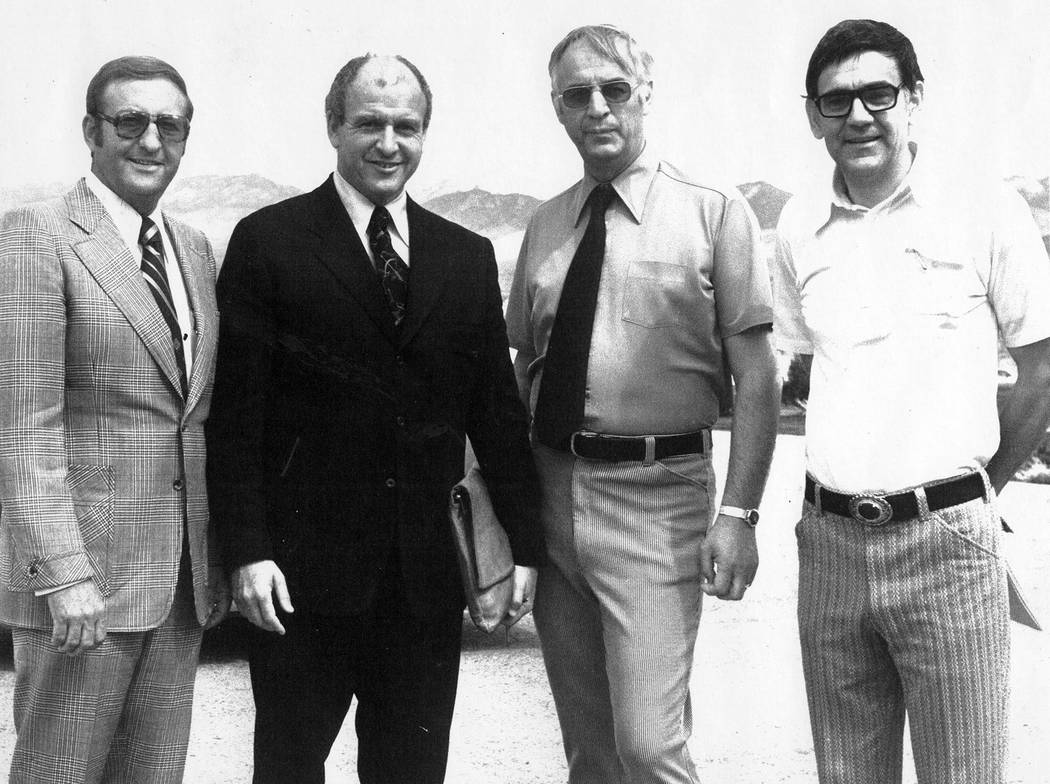 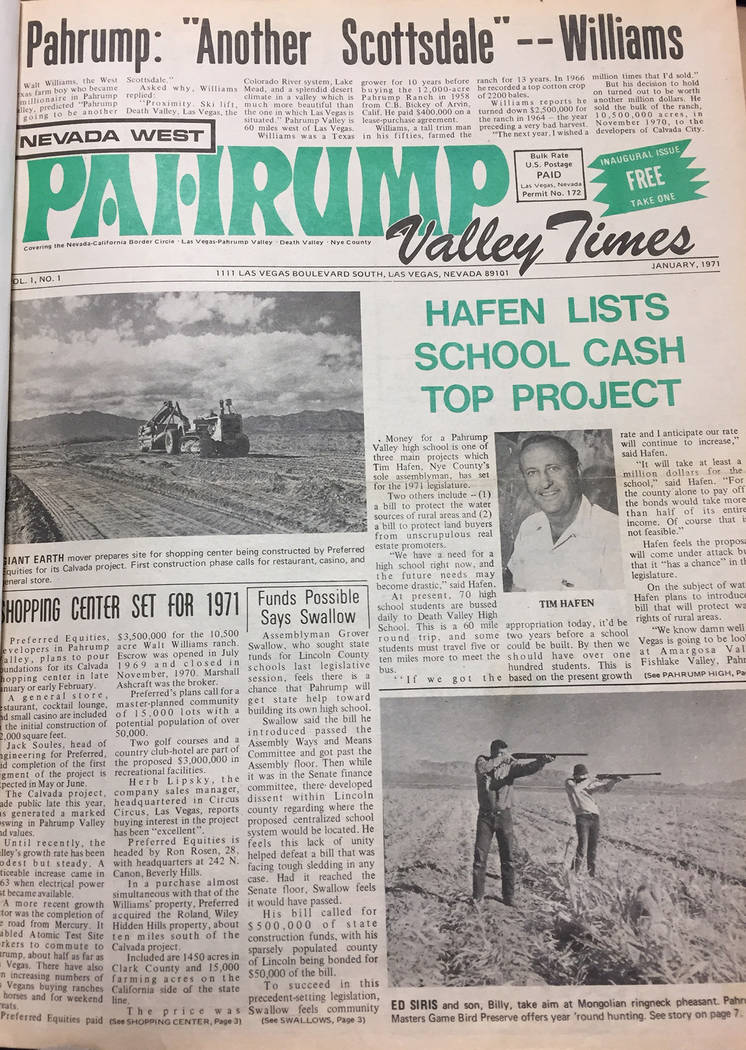 File Photo The front page of the first Pahrump Valley Times published in late December 1970. The paper was founded and owned by Milt Bozanic and started as a monthly, growing to a weekly in 1976. It is now distributed Wednesday and Friday. 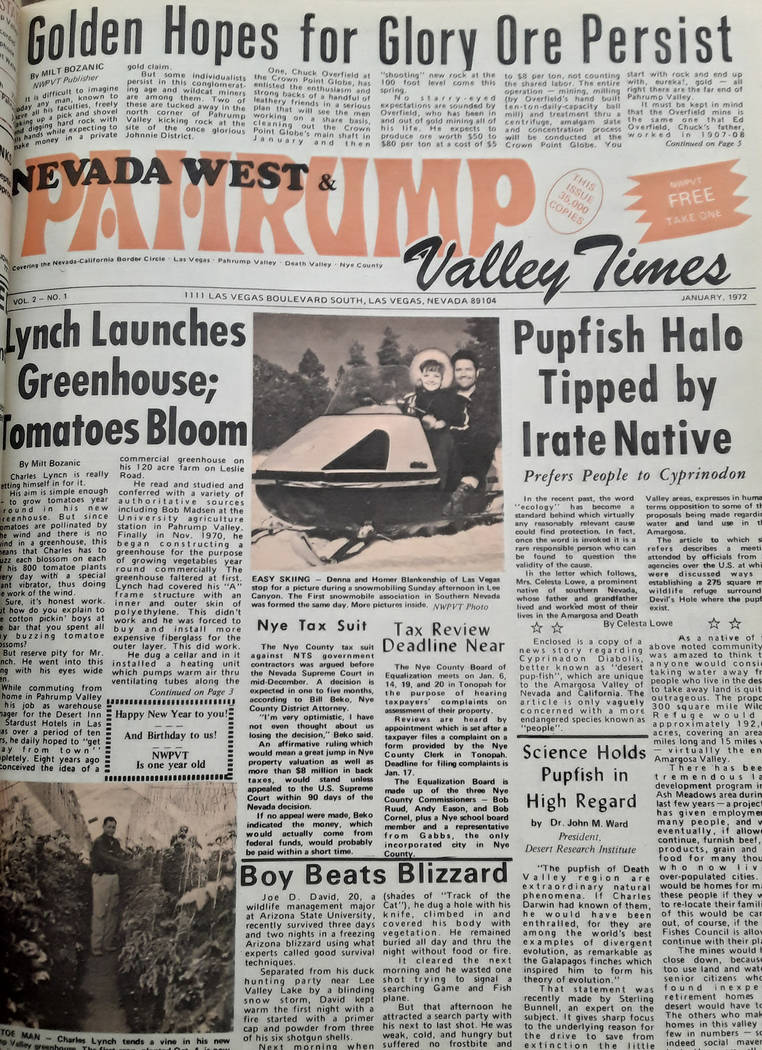 Selwyn Harris/Pahrump Valley Times During an interview back in 2016, Pahrump Valley Times founder Milton Bozanic spoke about why he took the risk of starting up a community newspaper so early in modern Pahrump’s development. Production of a new edition each week was a one-man show, where Bozanic did all the reporting, writing and layout. 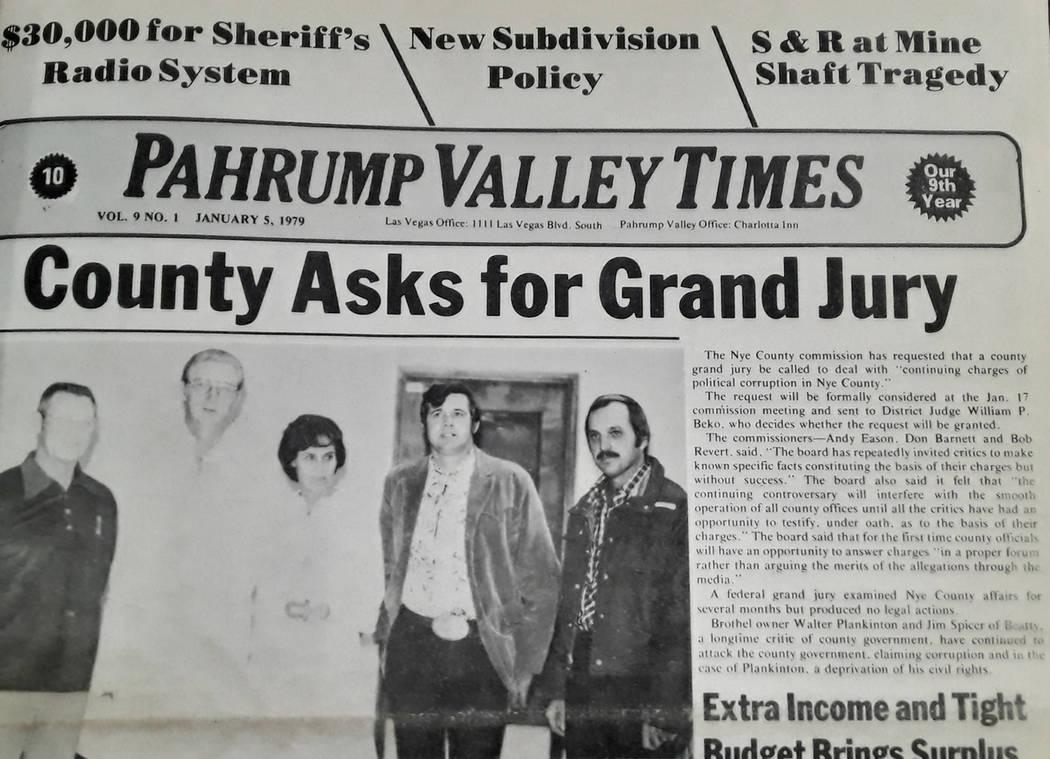 Selwyn Harris/Pahrump Valley Times The first issues of the newspaper were composed entirely by hand, which was quite different from present day where everything is done with a computer. 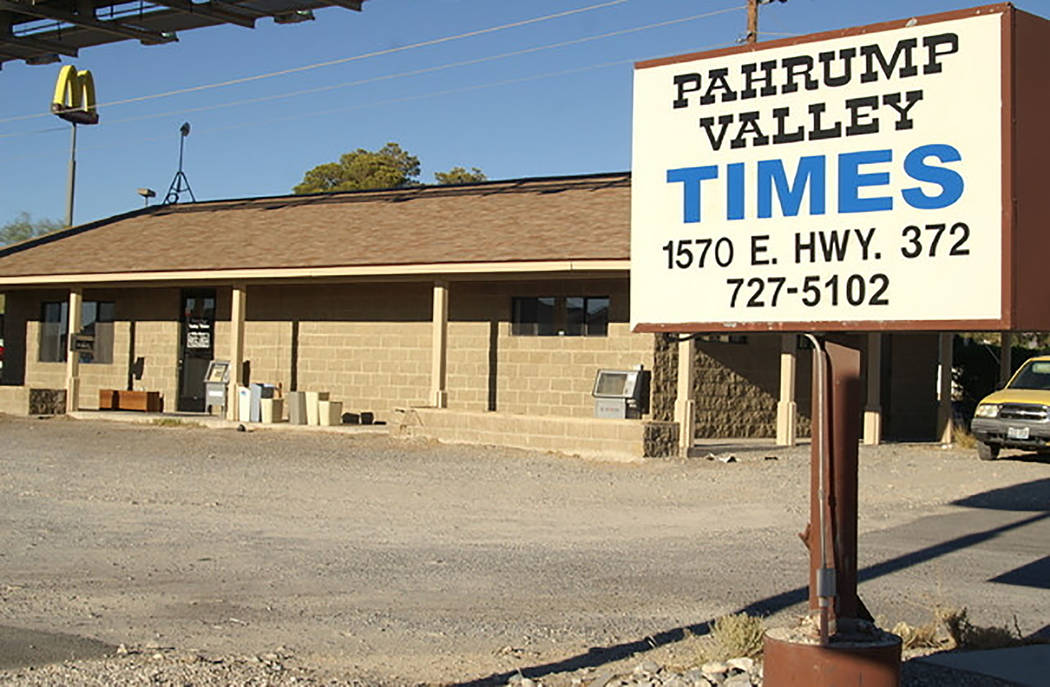 The Pahrump Valley Times reached a ‘golden’ milestone in December; ringing in the month, and soon a new year, though the countdown to 2021 won’t bring an end to the beginning of the publication’s notable 50-year anniversary.

Through the years, since the publication laid its roots as a free monthly community newspaper in the 1970s, the Times grew into a weekly within its early years of operation; and in its modern era has increased its print frequency in the Nye County area to become a semi-weekly newspaper that reaches Beatty, Amargosa Valley and as far as Shoshone, California.

“I am proud to be at the helm of the publication during this remarkable time in its history,” said Pahrump Valley Times Interim Editor Jeffrey Meehan. “The publication would like to extend its thanks to Pahrump and greater Nye County for its continued effort in keeping the Times a long-standing tradition in the community. I look forward to serving the readers with locally-focused coverage in the coming months, coming years and coming decades.”

To commemorate the start of its anniversary year, the times has reverted its cover to its original design.

The Times first appeared on Dec. 23, 1970 as an occasional sheet that promoted land for sale in southern Nye County. The publication started out as a monthly, becoming a weekly in 1976, according to the Times archives.

The publication got its start through founder Milton “Milt” Bozanic, who died on March 7, 2019.

During an interview back in 2016 with the Times, Bozanic spoke about why he took the risk of starting up a community newspaper so early in modern Pahrump’s development.

Bozanic noted that with all his years selling advertising in the television business, his income became dependent upon his ability to sell advertising to support what he was doing.

For a time, Bozanic worked in advertising and hosted his own popular television show entitled, “Look Who’s Talking with Milt Bozanic,” for more than 10 years.

“I was an independent operator and I understood the risk,” he recalled.

When the paper began accepting legal ads in Dec. 1979, it essentially established itself as the official newspaper of record for Pahrump and Nye County.

When the Times was a weekly, production of a new edition each week was a one-man show, where Bozanic did all the reporting, writing, and layout in the publication’s early years.

Bozanic printed thousands of copies for each edition, which reached Pahrump and other rural areas in Nye and beyond, he said in prior interviews with the Times.

It was available in Pahrump and other surrounding communities in southern and central Nevada, including in Mesquite, Amargosa Valley and Tonopah, where copies were mailed for distribution.

The first issues of the newspaper were composed entirely by hand, which was quite different from today, when everything is done with a computer, according to a 2016 interview with Bozanic.

A little later, Bozanic acquired a “primitive” headline setter that formed the headlines one word at a time.

It took all Bozanic’s energy and he never missed an issue, but he realized that he was depleting his reserves.

Competition in the past

Along the way, the Times had its share of local competition, as the Pahrump Mirror began its story in 1983 with then-owners Robert and Lindsey Lowes of Beatty, who led the press as The Death Valley Gateway Gazette at that time.

In 1992, the Pahrump Mirror publication entered a new era of ownership and came under the helm of Joe Richards, then-owner of two bordellos in Crystal.

Richards sold those holdings to Dennis Hof in 2010, the Las Vegas Review-Journal, affiliate publication to the Times, reported around the time of the sale.

About a year and a half after the Times appeared (December, 1970), the Pahrump Valley Star began publication as an “occasional sheet” inside the Times.

The Star became a weekly on July 31, 1975, more than a year before the Times became a weekly. Bozanic ended up purchasing the Pahrump Valley Star in August 1981.

Two other Pahrump Valley publications were Desert Living, which began publishing in the summer of 1979 as a quarterly, and the Pahrump Tribune, a bimonthly that began in October 1979, but both were short-lived.

In November 1989, the Times went through an ownership change. At that time, Joe Thurlow, former co-owner of the Times, in his early 60s at the time, was looking for an investment at that point in his life, according to his son, Rich, who he purchased the paper with over three decades ago.

“My dad (Joe Thurlow) was looking for an investment at that point in his life,” said Rich in a recent interview. “I knew about Pahrump, and I visited Milt Bozanic in 1989 to see about a job.”

But it turned into more than just that. “Milt actually founded the Pahrump Valley Times, and we knew that the place was for sale, so we struck a deal,” Rich said.

“When I arrived in Pahrump, the population was maybe 6,500 or 7,000 people in 1989 and it was just starting to boom,” he said. “We had four full-time people and one part-timer when we started. We just tried to stay caught up, but it was also a lot of fun.”

The Thurlows brought about new changes to the publication during their ownership.

“We started the home delivery business side of the paper,” Thurlow said. “I think it was phone number hookups, so we would take those, and every quarter, we would multiply it by three. It was just an odd guess and we would come up with an estimate. We guessed that the town’s population was growing by 2,000 to 2,500 a year. It sounded screwy, but if you go back and look at the enrollment, it was just mind-boggling how fast the town was actually coming together. I knew that was going on when we bought the newspaper, so all we had to do was just try to keep up. It was just phenomenal.”

The publication moved online during the Thurlow’s ownership.

“Back in the late 1990s we had some really sharp people on the staff who put us online, and we had the number one small circulation weekly newspaper, online edition in the country,” Thurlow recalled. “I didn’t even know it. Someone from the Las Vegas Sun called and told me. I never foresaw the impact that the internet would have on newspapers.”

Rich remembers having a great team.

“When I was there, we had the best damn newsroom that we have ever had, and we had some top-notch newspapers coming out,” Thurlow said. “I had Todd Dewey for sports and I had Henry Brean and Doug McMurdo in the newsroom, so we had some solid newspapers coming out twice a week, and we were really working. Every one of those guys ended up at the Las Vegas Review-Journal. I’m glad to see that the Pahrump Valley Times is still going strong, but it’s been a struggle obviously. I left the Pahrump Valley Times in 2002.”

Stephens Media picked up the brand in 2002.

In a 2015 article Times article, it was reported that the publication came under new ownership as part of a deal to sell its parent company, Stephens Media, which purchased the Times back in 2002, to New York-based New Media Investment Group.

Editor’s note: Information in this article was compiled through Pahrump Valley Times and Las Vegas Review-Journal archives and Times research.