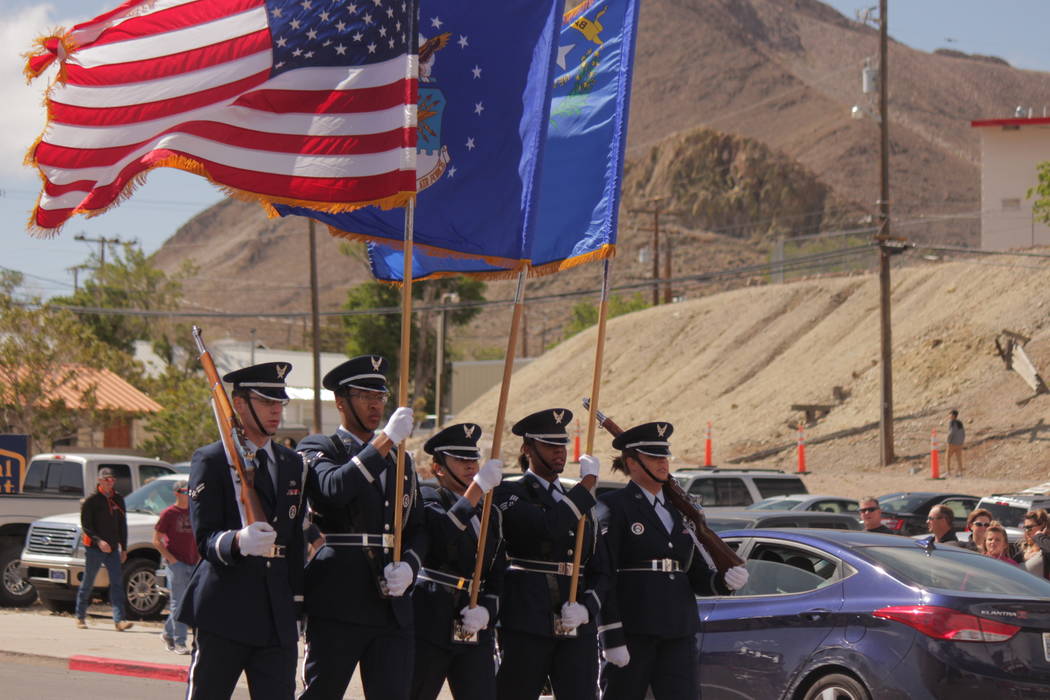 Jeffrey Meehan/Pahrump Valley Times The Nellis Air Force Honor Guard was first to walk along Main Street in Tonopah during the Jim Butler Days' event on May 26, 2018. The event lasted roughly an hour. 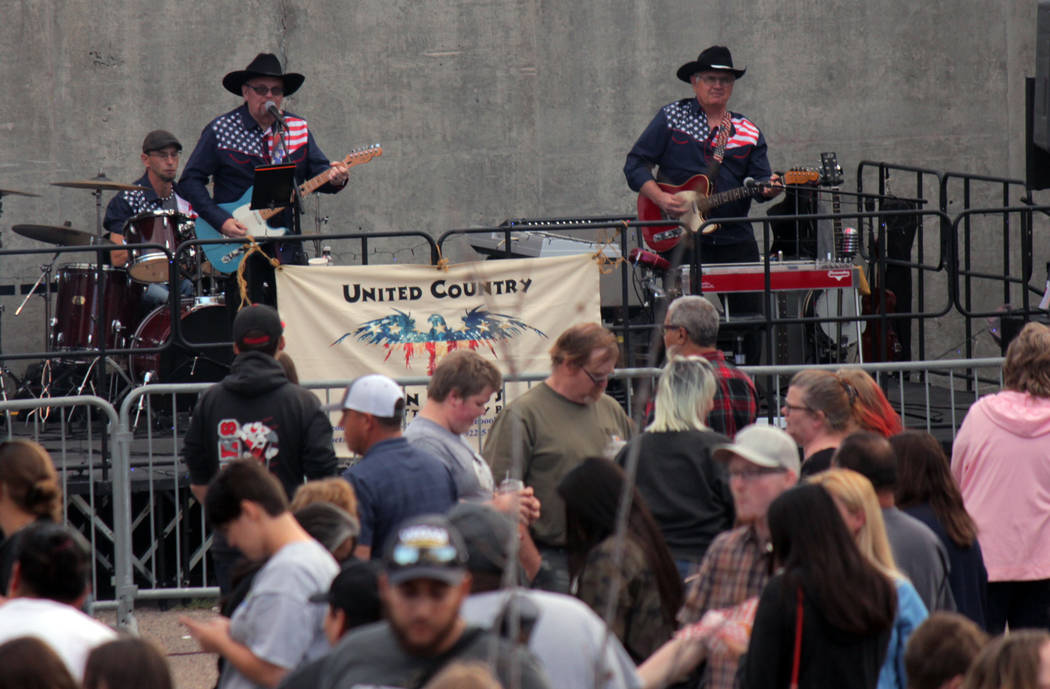 Jeffrey Meehan/Pahrump Valley Times Things heated up along Main Street in Tonopah as the street dance got underway during the Jim Butler Days celebration on May 25, 2018. About 100 people gathered in an area across from the Mizpah Hotel in Tonopah to eat, celebrate and listen to live music from United Country. 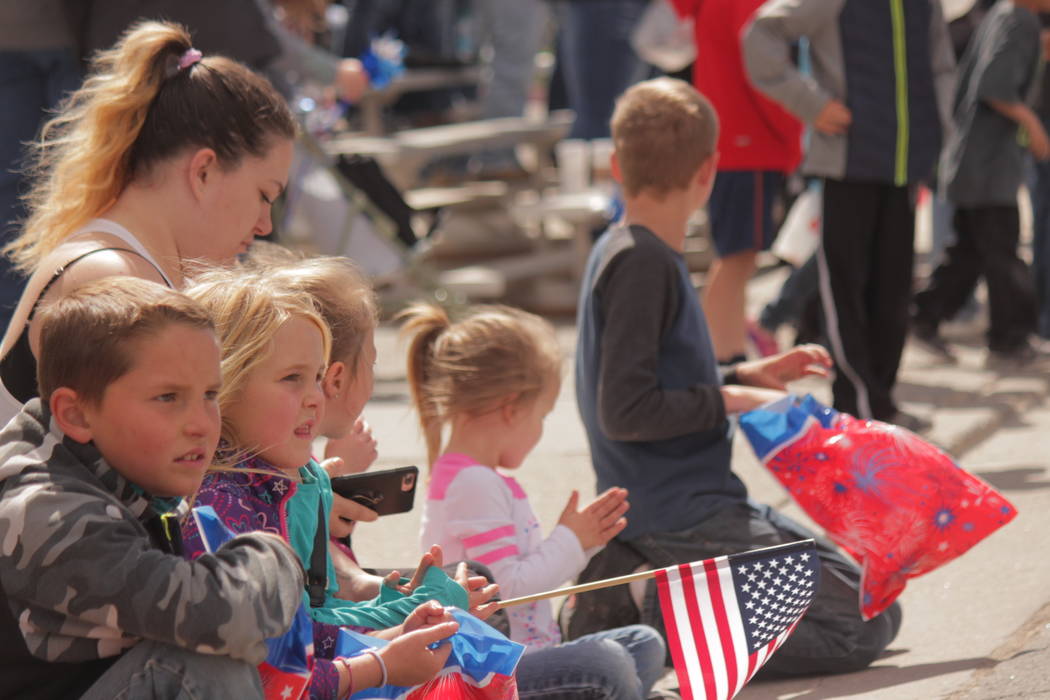 Jeffrey Meehan/Pahrump Valley Times Onlookers lined Main Street for the the parade at the Jim Butler Days in Tonopah on May 26, 2018. Hundreds watched as military organizations and others rolled by during the roughly hour-long event. 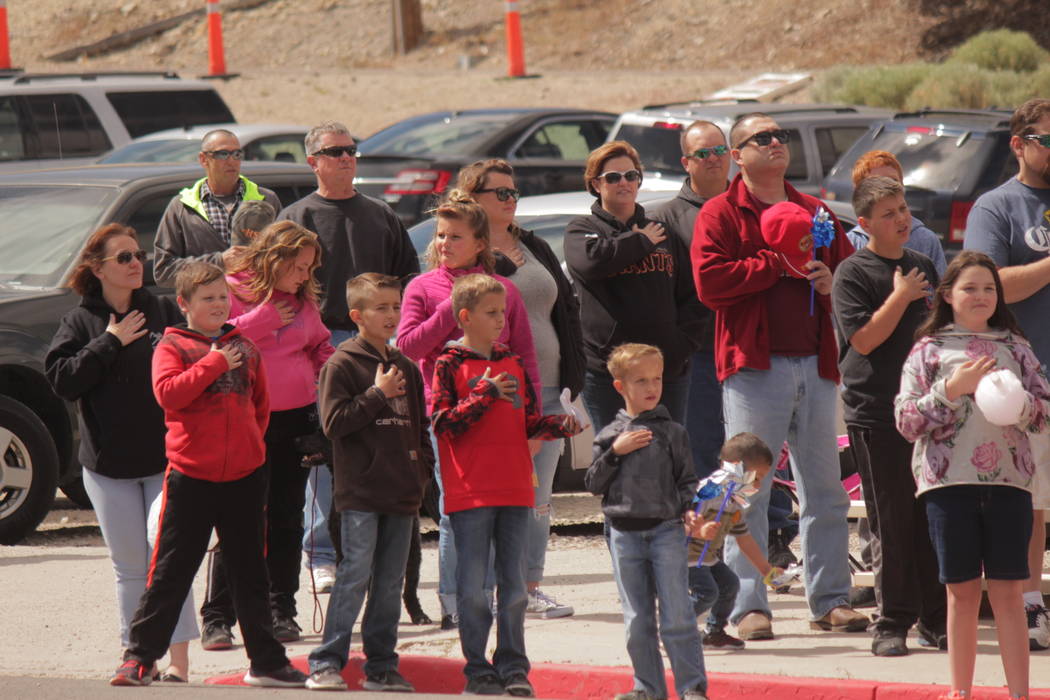 Jeffrey Meehan/Pahrump Valley Times The national anthem could be heard across Main Street on May 26, 2018. Onlookers lined the streets as young and old put their hands across their hearts. 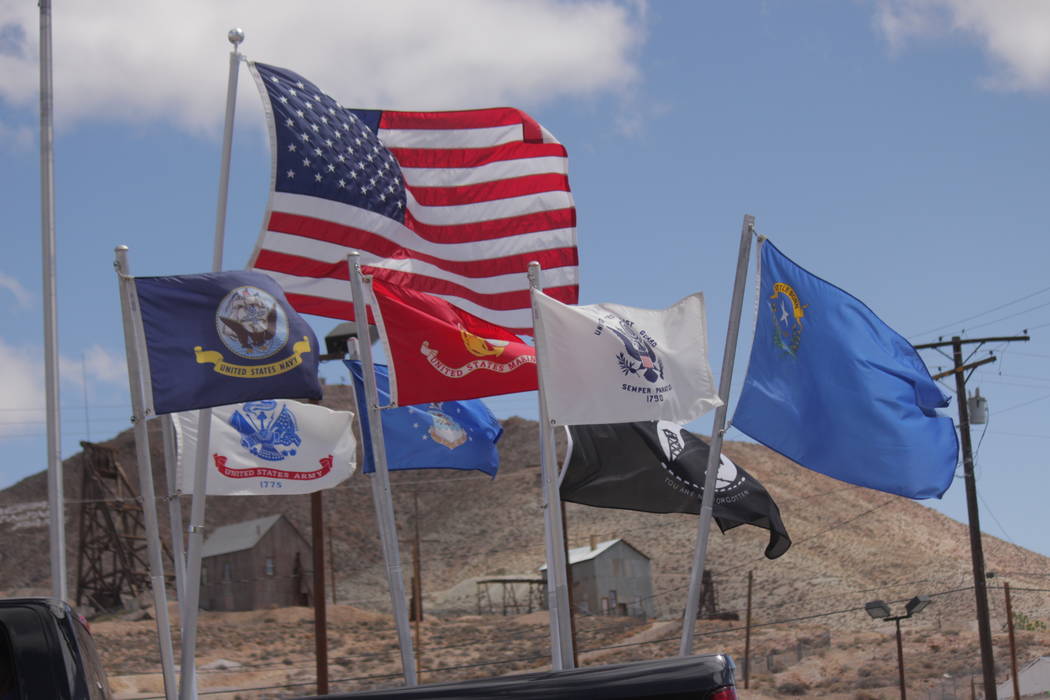 Jeffrey Meehan/Pahrump Valley Times Flags fly during the Jim Butler Days parade on May 26, 2018. The parade lasted roughly an hour as it rolled down Main Street in Tonopah. 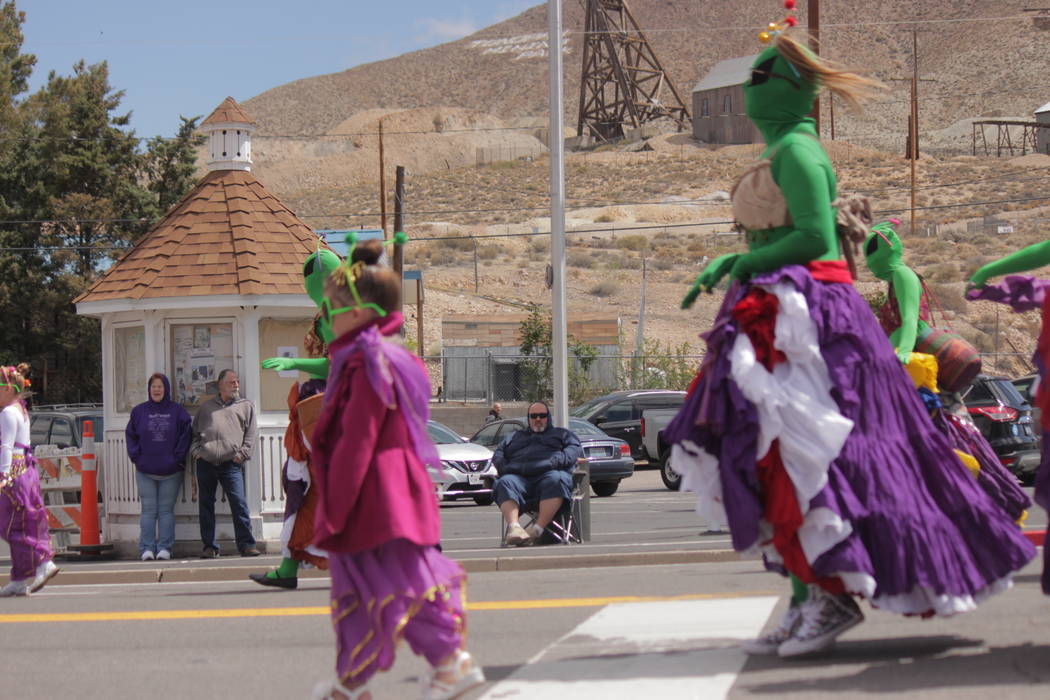 Jeffrey Meehan/Pahrump Valley Times Extraterrestrials strolled down Main Street during the parade at Jim Butler Days. The off-planet beings walked and jumped during the hour-long event.

Residents of Tonopah and others that attended the Jim Butler Days celebration during Memorial Day weekend, celebrated the town’s founder, along with the warriors that died in battle defending America throughout its history.

Cindy Kaminski, a Butler Days official and president of the Tonopah Veterans of Foreign Wars Auxiliary, said the Butler Days event is two-fold.

“Even though they call it Jim Butler Days, I always try to remind everybody that it’s Memorial Day weekend and the reason for it,” Kaminski said.

The remembrance of fallen heroes could be felt during the parade with the national anthem blaring down Tonopah’s main drag along Main Street that was filled with onlookers holding their hands over their hearts.

The parade on May 26 began with members of the Nellis Air Force Base Honor Guard, followed by members of the Tonopah Veterans of Foreign Wars Auxiliary and the Marine Corps Detachment.

The Jim Butler event, which ran from May 21-28, also brings in visitors from Nevada and beyond to enjoy several events: a United Service Organizations’ mixer; a Boy Scouts pancake breakfast; a pie-eating contest and much more. The 48th annual event was themed “Tonopah Army Airfield Revisited” (1948-2018).

The king and queen of Jim Butler Days were Paul and Khris Campos. The duo was coronated on May 23 at the Tonopah Convention Center.

Elizabeth Gillard was named as the junior princess, said Kaminski. Three other girls were named princesses: Jessie Mendoza, Jacy Kiersch and Abby Bergeron was the princess in the Little Miss category.

The weekend was filled with raffle prizes, including tickets to Disneyland and Knott’s Berry Farm, along with other things such as boat rides in the San Francisco Bay and in Lake Tahoe, according to Kaminski. Those prizes were available through the Jim Butler Days raffle.

The Tonopah VFW also had its own raffle with prizes that included a Char-Broil gas barbecue grill—a four-burner grill with a side burner, Kaminski said.

The VFW also had many other prizes it gave away to people who purchased raffle tickets from the VFW.

Kaminski said the VFW does the raffle every year, and it keeps the VFW operating in Tonopah and funds all the things that the VFW does for veterans and their families locally.

“Lots for all the family to do during this event, a great family getaway in the Old West mining town,” said Barbara DeYoe. “I always say take a trip back in time when you visit our historical town and all it has to offer.”

DeYoe’s husband, Daran, is a band member in United Country, a San Diego country music band that plays throughout the year in Tonopah at various events, including Butler Days. United Country played during the street dance on May 25 at this year’s Butler Days.

Daran DeYoe and his family are from Tonopah.

No vacancy signs hung from most of the hotels in town, including the Jim Butler Inn &Suites.

“We were fully booked for the weekend, and most of our reservations are done six months in advance for Butler Days,” said Angela Bagarose of the Jim Butler Inn.

People headed in from all over, with many of them departing on Sunday morning, she said.

For those who stayed through Memorial Day, Kaminski said the Tonopah VFW Auxiliary did a ceremony at the Tonopah and Goldfield cemeteries.