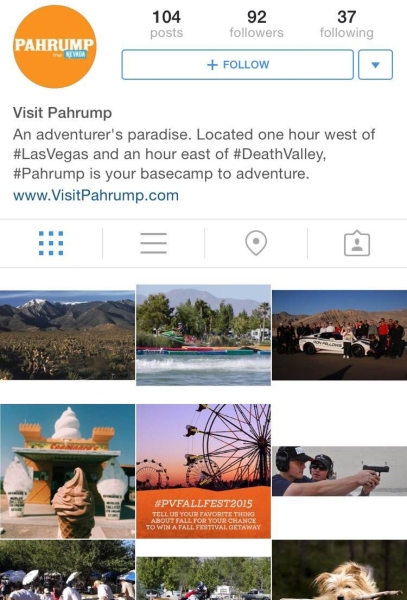 The Pahrump Tourism Advisory Committee has continued to see solid returns from their work, helping draw attention to potential visitors to town.

Pahrump Tourism Director Arlette Ledbetter and company have been busy promoting the area, utilizing partnerships and attending events to garner attention toward tourism in town.

Partnerships with Death Valley National Park have continued to pay off for the town as the new park superintendent, Mike Reynolds, settles in after taking over.

The tourism board explained that they have created a stronger Pahrump with the economic impact of Death Valley visitors.

“The park (Death Valley) topped 1.1 million visitors this past year,” Ledbetter said. “The valley receives a generous amount of revenue from those travelers as well.”

Through the month of August and September there has been a heavy focus on promoting the Fall Festival and Grape Stomp Festival through print and digital ads, radio advertising, social media ads and contests as well as outreach and initiatives.

With the events being two of the bigger and most popular ones each year, the concentration of the two by the tourism board can only help those grow.

A fair amount of visitors over the hump attend the events, as Pahrump Valley Winery owner Bill Loken explained, so targeting them is key to growing the pair of events.

In July and August alone advertising amassed more than $170,000 in publicity value and 190 million earned Impressions with the help of the Las Vegas-based marketing firm BRAINtrust. Some of the media outlets that picked up stories in Pahrump included CBS Las Vegas, the Las Vegas Sun and the Las Vegas Weekly, among others.

Overall, traffic to the website and social media has increased year-over-year, and with a major change on its way for the site, that trend should continue in the future.

“We will promote the new website once it goes live via social media and newsletters to assist in additional traffic and engagement,” Ledbetter said.

Ledbetter attended Destination Marketing Association International to participate in the ongoing dialogue and knowledge exchange at the event. A highlight of the convention was the social media influencer rally connecting the supplier with influencers for a powerful exchange of travel information.

After Friday’s meeting, Ledbetter will also be attending the Nevada Global Conference on Tourism at Lake Las Vegas November 16-17. The event will help better prepare Pahrump for the wave of international visitors that Nevada will welcome as it expands to new international markets.

Marvin Minnick, chairman of Nevada Silver Trails, was on the Nevada Governor’s European Trade Mission in July to do just that. Minnick met with with travel agencies during a gathering in London, England and Berlin, Germany, highlighting what Pahrump and Nye County have to offer.

“We met with travel agents and people that own travel companies,” Minnick said. “A lot of them create specialized tours too where they’ll set up a package where you can spend three or four nights in Vegas, then you have a rental car and you go through rural Nevada, setting up different places to go there and then you fly out of Reno.”

Already planning for a large event that will take place early next year, the tourism committee hopes to attract more snowbirds to town.

“Pahrump Tourism Advisory Committee is preparing for the Quartzsite Sports Vacation and RV Show in Quartzsite, Arizona January 16 through 25, 2016,” Ledbetter said. “This show is billed as ‘the largest gathering of RVers in the world’. Preparation begins now to pre-stuff promotional bags and coordinate volunteer staffing.”

If your business wants to be included in the event you can deliver your brochures to the town office located at 400 N. Highway 160 for inclusion in the promotional bags or by calling 775-727-2820 for more information.