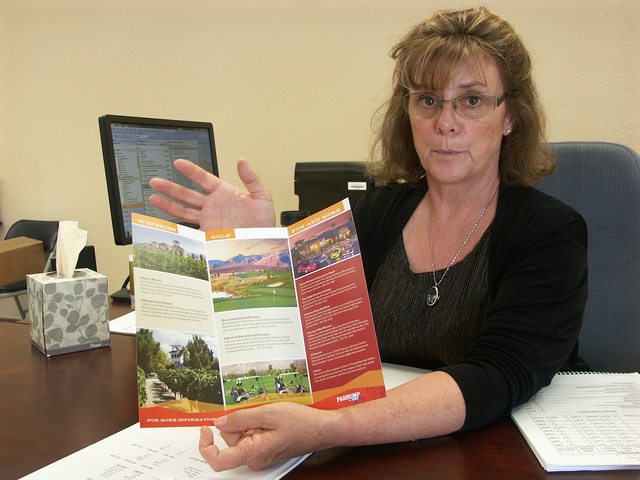 Pahrump’s tourism director had much to be pleased about after last week’s town board meeting.

Arlette Ledbetter’s presentation was more than enough to convince the board to approve marketing projects for the Pahrump Tourism Department and the town’s tourism advisory board for 2015.

Matching grants will come from the Nevada Commission on Tourism (NCOT).

Ledbetter said she believes previous marketing efforts and their results helped to convince the board to vote 5-0 to approve the new projects.

BRAINtrust, which was hired by the town earlier this year, is described as a full-service agency that has overseen countless national, regional, and local brand marketing and public relations campaigns, mainly in the hospitality, entertainment, and consumer attractions industry.

“I think it speaks to the marketing effort that we’ve been able to accomplish this past year. We have a fresh new perspective with BRAINtrust Marketing and Communications. We’ve produced a new brochure that is rich and vibrant in color. For the first time, the brochure focuses on the Pahrump community solely,” she said.

A new tri-fold brochure highlights local destinations in the Pahrump Valley, including both wineries, area golf courses and RV parks.

Strategic advertising is another tool the tourism department is using, as three digital billboards are now operating in Las Vegas along with an advertisement on the Las Vegas Sun’s website.

Tourism officials are focusing mainly on Southern Nevada with a mix of print, outdoor and radio spots to saturate the region.

Additionally, Pahrump has been featured in numerous high profile travel and RV publications.

Several fresh slogans have also been unveiled for the ads in Las Vegas, which tout Pahrump’s positives when compared to the congestion and frenetic pace of Las Vegas.

James Horton of Preferred RV Resort told the board that his facility has seen an occupancy increase, which he credited to the tourism department’s work.

“I believe what we’ve experienced is fairly typical of what the town as a whole has experienced. Three or four years ago, I could not have told you that because it was very much negative. I would love to be able to tell you that change was entirely the efforts of our own, but it most definitely wasn’t all of our own. A lot of it included the comprehensive marketing that the town has done,” he said.

Additionally, Horton said he is pleased that the town’s reinvigorated marketing campaign also boasts other area locations that would likely entice tourists to stop and visit the community for an extended stay.

“We’re not selling something small or short-lived. We are selling the area as a whole. We’re selling the small town charm as well as the proximities to Las Vegas and the lack of traffic. The fact that you can get anywhere in town in a matter of a couple of minutes. That’s the only thing we can do that will bring somebody to Pahrump that will make them want to spend an entire winter with us,” he said.

Social media exposure also appears to be yet another component in developing interest in the community.

According to BRAINtrust’s monthly marketing update summary from May 23 to June 19, the town saw 796 new Facebook fans, with 1,589 likes.

A breakdown on gender showed the audience consisted of 52 percent male versus 47 percent female.

Other social media sites such as Twitter and Instagram have experienced a noticeable increase in web traffic.

Earlier this year, Ledbetter said the town’s tourism website sustained a significant increase in “virtual visitors,” which usually precipitates actual visitors looking to learn more about what the area has to offer first time visitors.

“For the month of January, we have seen our highest increase in Facebook likes over December by 14.2 percent,” Ledbetter said. “We have since doubled those and we had a 41 percent increase in our Flickr views, which are our photo views for the town of Pahrump. We also had a 20 percent increase in YouTube views and currently, we are above 4,700 views of our introductory Pahrump video and our adventure series, which is just phenomenal for us,” she said.

Pahrump Nugget General Manager Jeremy Jensen was also in agreement with Horton about a spike in visitors, as their respective properties are adjacent to one another.

In other words, when Preferred RV sees more visitors, so does the Pahrump Nugget.

Jensen said his property has witnessed an increase in visitor volume, which he deemed was directly related to the work of the tourism department.

He spoke on behalf of Blake Sartini, chairman, president and CEO of Golden Gaming.

“We are all very thrilled at what’s going on. With the statistics we’ve seen tonight, it’s important to realize all of the positives that we are getting out into these other market areas. The work that they have done is high quality work. The social media is fantastic. It’s very easy to use and it’s interactive. It brings awareness to the town which we really never had to this extent.

Jensen also said the renewed marketing efforts give those who are not familiar with the town a better and more accurate understanding of the community.

“I have been out here over 10 years. I have spoken to many people outside of Pahrump and you’d be surprised how many people are not even aware of Pahrump, or if they are, it’s all negative. So it’s important that we are out there in these other markets pushing the positives and creating an awareness of the town,” he said.

There was no shortage of testimonials from local business owners touting the town’s efforts.

Sanders is also a member of the Pahrump Tourism Advisory Board.

“Both wineries have a promotion with Golden Gaming and we work very closely with Saddle West and all of the RV parks. Not only are we working together to bring the community standards up, but we are also obviously looking for our self-benefit too, to bring our industry up. The board that I work with has such a high degree of professionalism,” he said.

Ledbetter, meanwhile, said the tourism department is also reaching out to another class of potential guests – the corporate crowd.

“We have an awesome arena here for corporate challenges and team building. The Spring Mountain Motor Ranch has a skid pad where they have team building opportunities. Front Sight is just full of opportunities with rope, rappelling and all of the tactical features that they have. That’s really where we need to go as well,” she said.