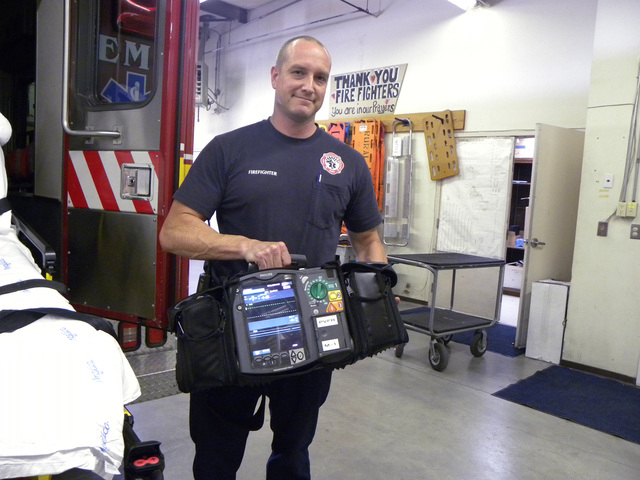 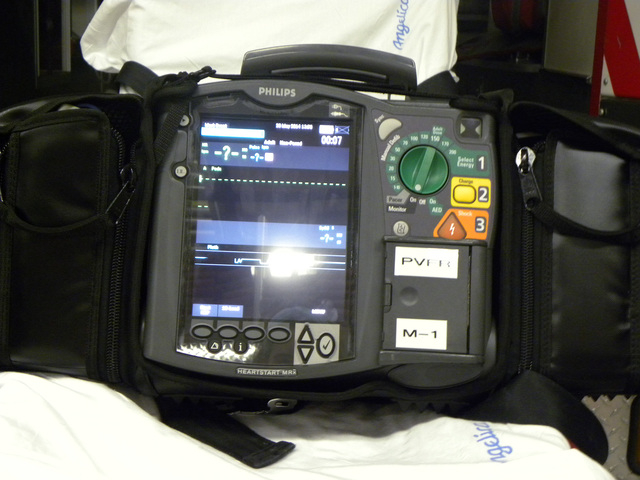 Crew members say within the short amount of time they’ve had the new monitors in service, they have already noticed a vast improvement in the quality of information they receive about their patients’ conditions from the new equipment.

“I’ve got a couple of paramedic partners that right off the bat said they noticed a big difference. It’s a much clearer picture and bigger screen,” Firefighter Allen McFall said. “Our old monitors had a smaller screen and only showed EKG (electrocardiogram), and only one of them did blood pressure. But this also has a 12-lead. It basically shows us a live picture of the heart on the screen. The others ones you had to print out the paper and it would only give you a five-second glimpse. This continuously shows you what’s going on. And if you see something you think you need to show the doctor, you can hit print and it will print the entire thing if you want. You can go back several seconds to look at something and it also saves the entire report.”

The new monitors have two sides to them. On the left-hand side there is equipment to monitor blood pressure, heart rate and other vital signs. On the right side is situated the defibrillator equipment, which is used when it’s believed a patient may be suffering from a cardiac event.

McFall added that with the defibrillator equipment there are also CPR compression monitors, which measure the depth and rhythm of medics’ compressions if they are performing CPR.

In addition to the new tools and equipment included with the monitors, the machines also have the ability to connect wirelessly, via Bluetooth, with the firefighter and medics’ Toughbook laptops, which are used to record patient information and reports.

“With all of our vitals, we don’t have to punch them in, you just find the vitals, click send and it goes right to the report. It’s better for us and more efficient for the patient,” McFall said.

The monitors reportedly have a long battery life and can run continuously for six or seven hours before they need to be plugged into a power source.

“Some of the local residents know we transport people from Desert View Hospital to hospitals in Las Vegas, and the battery life on these when they’re not plugged in is about six or seven hours. And that’s actively turned on and working. So there’s no problem with us using them all day. And when they’re in the back (of the ambulance) they’re plugged in and charging,” McFall said.

A committee was established within PVFRS to search for the new equipment earlier this year after crew members felt that they needed something more advanced to provide the highest level of service possible to the people of Pahrump.

“Our old monitors were made more for hospital-like settings, like for a room or still environment. We work in the back of an ambulance, stuff is bouncing around, especially on some of the roads here in Pahrump. So even when we would stop and turn the truck off, we were still picking up artifact, or interference, so you couldn’t get a very good picture of the heart, it was fuzzy,” he said.

McFall added the old monitors the department was using up until last week were also 12 years old.

The committee went to the Pahrump Town Board and asked if they could call for a bid on new equipment. The board agreed and in February the town purchased the six new Philips machines for $120,991.50.

According to minutes from the Feb. 11 board meeting, since the machines were purchased new, instead of refurbished, they also reportedly come with a two-year maintenance policy as well.

Another perk to the new equipment, McFall said, is that it can be upgraded easily by simply updating the software.

“The nice thing about these is that they’re upgradable. So we can pull out a chip, put in a new chip and it’s upgraded at no extra cost. Even if these get to be years old, all you have to do is update the software and you have the newest technology,” the firefighter explained.

PVFRS crew members were trained on the new equipment by a representative of the manufacturer before it was put into use. Firefighters and medics were also given an online class to complete as part of their training on the new monitors and defibrillators as well.

The most important part of the new equipment, McFall said, is that it gives medics a clearer picture of what is wrong with their patients, which helps them to get those patients the help they need for whatever issue they’re having.