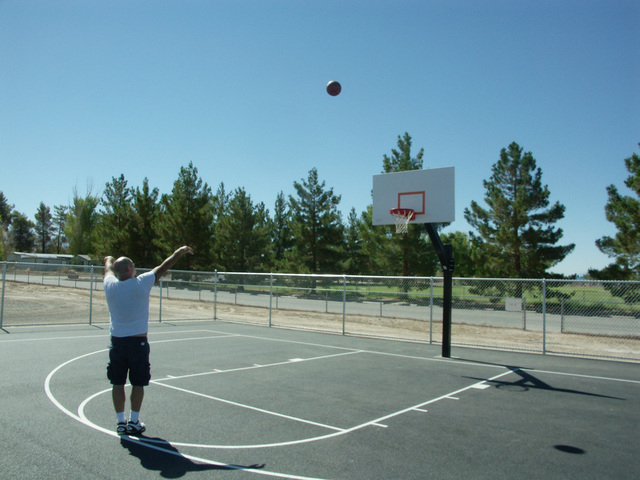 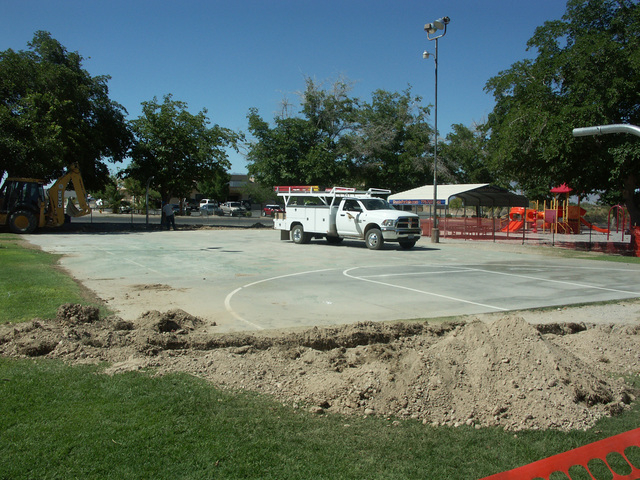 Pahrump resident Lance B. wasn’t exactly raining down three-pointers at the brand new Simkins Park basketball courts on Monday, but he seemed to be okay with that.

Town officials recently held a ribbon cutting ceremony to commemorate the new courts, but a sticky situation soon emerged — the surface of the court was, well, too sticky.

Town Manager Susan Holecheck said she and town board members were not pleased with the finished product.

In March, the town paid $116,324 for the work. It took roughly 60 days to complete and included two full-sized basketball courts as well as additional amenities such as drinking fountains for the players and adjacent seating areas.

Town Board Vice Chair Bill Dolan said he also noticed the condition of the court’s surface and felt the contractor needed to remedy the issue.

“There was a flaw and they tried putting a coating on top of it and we required the contractor to go back and fix it at their cost. I don’t think it was the right type of surface. They removed the coating and I have been out there since and it is very nice,” he said.

Once the contractor was informed about the town’s concerns, Dolan suggested that town officials were forced to initiate a “full-court press” to get the company to comply with the terms of the contract after the company cried foul.

“There were some discussions over who was going to pay for what. The town informed them that we put it out for bid, this was the bid, and this is the way they were going to abide by it,” he said.

Lance, meanwhile, said he and other area residents say the new courts were a “slam-dunk” for the quiet neighborhood.

“This is fantastic and a job very well done. I never really played all that often but just recently I got back into it. I’ve been waiting for them to finish it. There were some kids here the other night while I was sitting on the grass, reading a book, and checking out the stars. I think we could also use some tennis courts out here as well,” he said after hitting a layup shot.

Dolan, meanwhile, also commented on another town project at Petrack Park this week as buildings and grounds crews work on the basketball courts there, which are in disrepair.

“They were there this week taking down the hoops. As soon as we learned that there was a possible hazard, I asked for the court to be closed, our insurance company was notified and they advised the town to post a sign that there was some uneven surfaces and to play at your own risk,” he said.

Crews are installing a new concrete court over the existing surface, while extending each end of the court.

The project may take up to 30 days to complete.