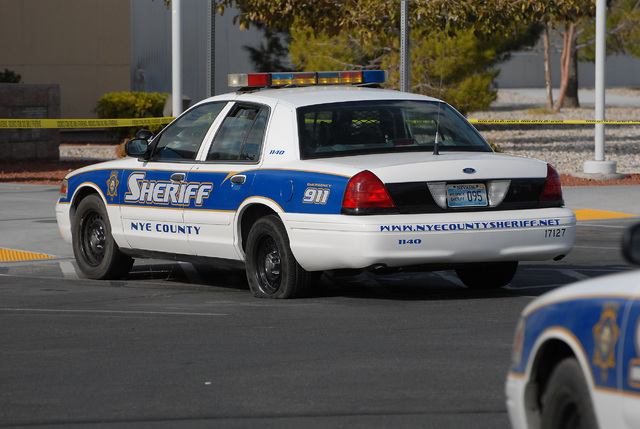 Horace Langford Jr./Special to the Pahrump Valley Times The Nye County Sheriff's Office has joined forces with law enforcement agencies across Nevada to crack down on impaired driving. The effort spans from Feb. 1-15.

Over the next two weeks, Nye County residents can expect to see double or even triple the normal law enforcement presence, the sheriff’s office announced.

It has joined forces with law enforcement agencies across Nevada to crack down on impaired driving.

The effort spans from Feb. 1-15 and includes the upcoming Super Bowl weekend.

As part of the initiative, the sheriff’s office says it has an important message for the public. “If you’ll be drinking, designate a sober driver, and if you drive impaired, you will be arrested.”

■ Designate a sober driver before drinking;

■ Use a taxi, call a sober friend or family member or use public transportation if impaired;

■ Take the keys or assist in making other arrangements for someone who is about to drive or ride while impaired.

The Joining Forces Program is paid for by Nevada Department of Public Safety, Office of Traffic Safety.

The Nevada Highway Patrol is part of the crackdown, too.

“The Nevada Highway Patrol will increase the number of Troopers on the road to target impaired drivers,” Trooper Jason Buratczuk said. “Residents can expect to see a heavy saturation of troopers during Super Bowl weekend. This is fair warning, make the right decision, drive sober or be prepared to face the consequences.”