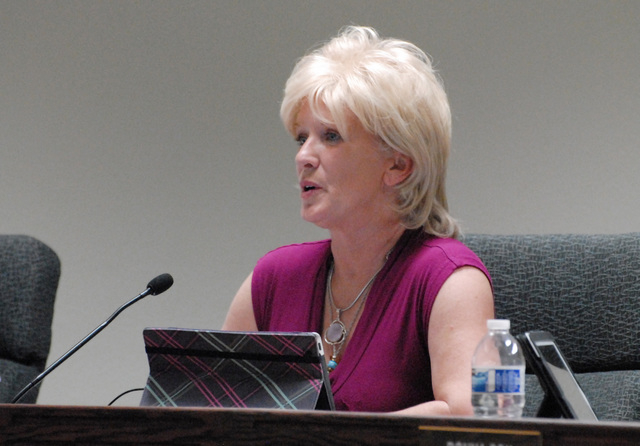 WASHINGTON D.C. — Nye County Commissioner Lorinda Wichman was part of a contingent of 1,500 county officials from across the country attending the National Association of Counties 2014 Legislative Conference here from March 1-5.

Wichman is president-elect of the Nevada Association of Counties and their representatives to the Western Interstate Region as well as a member of the Public Lands Steering Committee.

“We shouldn’t be trying to just look through the rear view mirror and get funding levels back to where they were, we need to put funding levels on a course to help our nation actually address our infrastructure deficit,” Foxx said during the closing session.

“Whether you’re talking about transportation, public lands, economic development, health care or justice and public safety, it’s important that Congress and federal officials hear directly from county officials about how we can work together to effectively serve the public,” Wichman said in a statement released by NACO. “Our county’s leadership and active involvement in NACO makes that not only possible but highly effective. NACO and its strong voice are well respected in Washington.”

A winter storm kept U.S. Rep. Rob Bishop, R-Utah, chairman of the House Subcommittee on Public Lands and Environmental Regulation from appearing in person, but he spoke via the Internet urging members to support new, invigorated efforts that would eliminate the annual ritual of searching for Payment in Lieu of Taxes (PILT) funds. He would like to use the Land and Water Conservation Fund money from offshore oil and gas leases, he said were being misused with 88 percent kept by the federal government.

U.S. Interior Secretary Sally Jewell said she realizes how hard it is for rural counties drawing PILT funds to lurch from continuing budget resolution to continuing resolution. She said the Interior Department is also working with local officials to find out “what areas we can de-conflict and not always argue in court.”