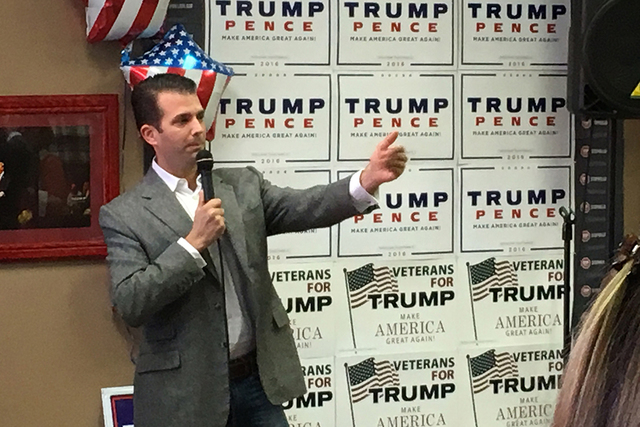 Donald J. Trump Jr. stumps for his father Tuesday, Oct. 18, 2016, in Reno ahead of the final debate Wednesday in Las Vegas. Sean Whaley/Special to the Pahrump Valley Times

RENO — Donald Trump Jr. told a roomful of campaign workers Tuesday that his father is facing off not only against Hillary Clinton but a mainstream media biased in favor of the Democratic presidential candidate.

Trump Jr. appeared at the GOP Victory Headquarters, giving brief remarks and taking questions from about 80 supporters. He also spoke at a Republican lunch event later in the day, delivering the same message.

“Fundamental freedoms are at stake here,” he said. “It is a disgusting thing that we’re seeing. It would be nice if people reported the truth.”

If Trump was just campaigning against Clinton and her policies, the race would be over by now, Trump Jr. said.

Allegations against Clinton have recently pointed to corruption at the highest level of government, he said.

He was referring to the revelations contained in recently released emails from the hacked account of Clinton Campaign Chairman John Podesta by the group WikiLeaks. The vast majority of the 50,000 hacked Podesta emails have yet to be released with three weeks left in the run up to the Nov. 8 general election

Trump Jr. spoke on the last day for Nevadans to register to vote, and one day before GOP presidential nominee Donald Trump faces Clinton in the final debate of the campaign in Las Vegas.

Clinton’s primary opponent, Bernie Sanders, plans to be in Reno on Wednesday to speak at a rally on her behalf at the University of Nevada, Reno.

Trump Jr. said his father appeals to a cross section of Americans, including women, Latinos and African-Americans, many of whom are registering for the first time so they can vote for him.

“These are people who have been disaffected, who have seen corruption from both sides,” he said.