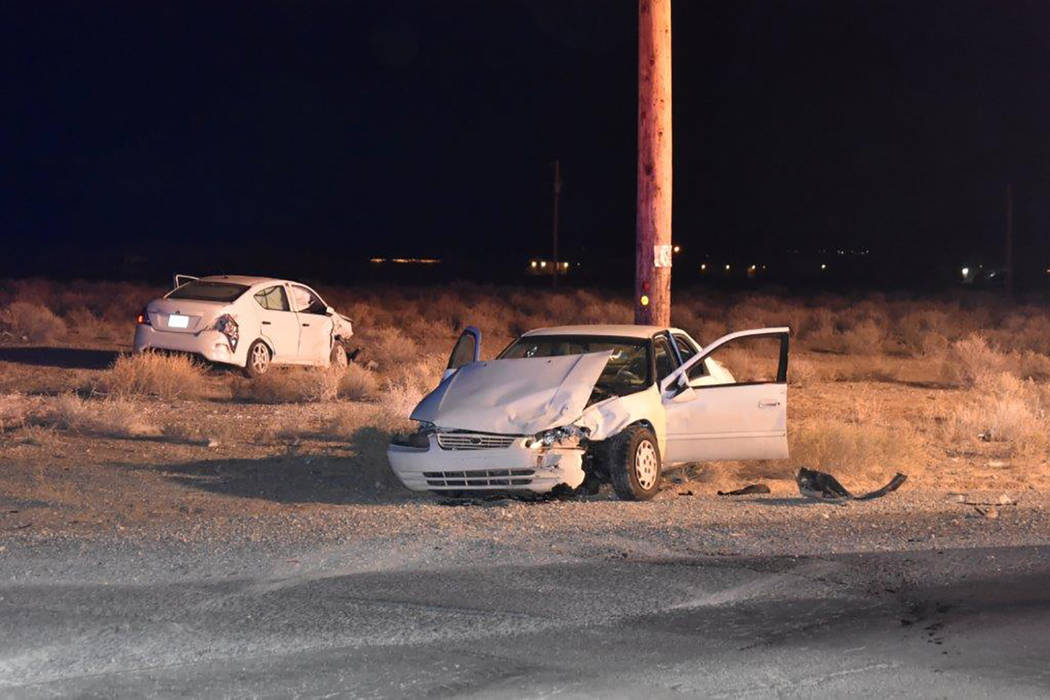 Special to the Pahrump Valley Times One person was transported via Mercy Air to UMC Trauma, following a two-vehicle collision at the intersection of Leslie Street and Charleston Park Avenue, just after 5 a.m. on Monday Dec. 17. The exact cause of the crash is under investigation. 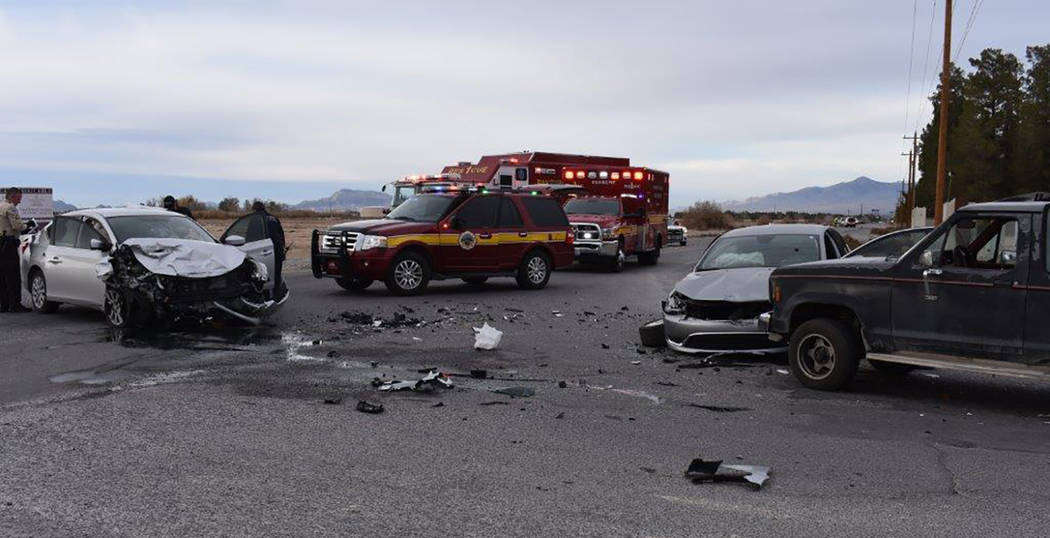 Special to the Pahrump Valley Times Two people were transported to Desert View Hospital after emergency crews responded to a three-vehicle collision at the intersection of Homestead and Kellogg roads on Friday afternoon Dec. 14. Mercy Air 21 was placed on standby, but was eventually released. 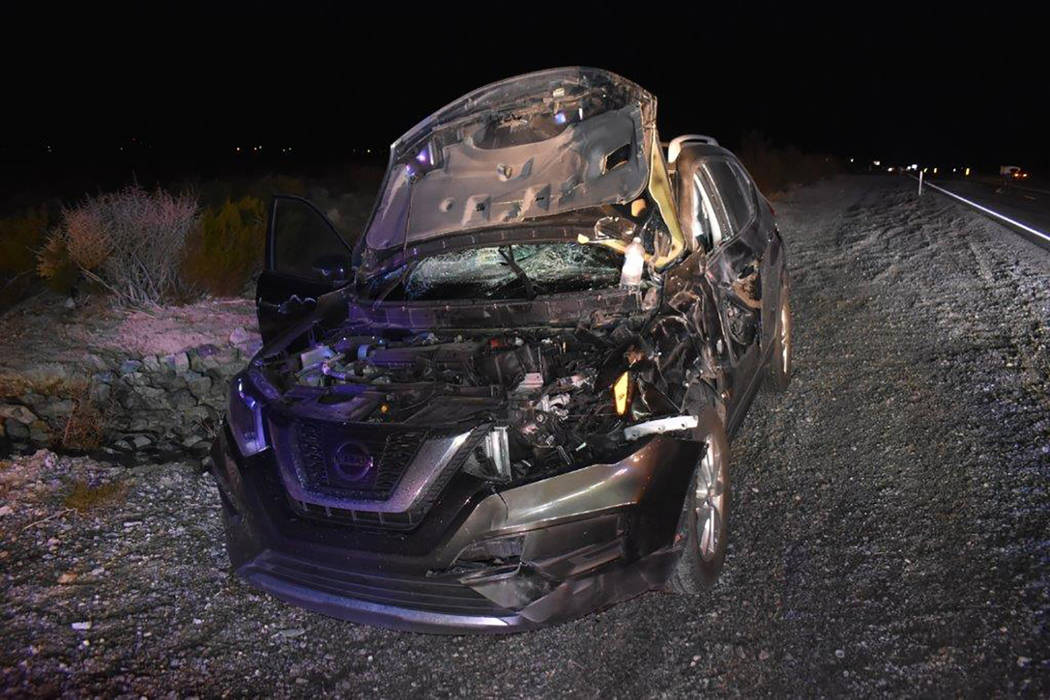 Special to the Pahrump Valley Times Fire crews were dispatched to Highway 160 at Irene Street on Dec. 7, for a multi-vehicle crash, caused by a wild horse crossing the highway. Though the horse died, no person was transported to the hospital.

Motor vehicle crashes appear to have dominated the majority of emergency service calls for Pahrump Valley Fire and Rescue Services personnel as of late.

Fire Chief Scott Lewis said crews were dispatched to the intersection of Charleston Park Avenue and Leslie Street for a two-vehicle collision just after 5 a.m. on Monday, Dec. 17.

“It was initially reported to be a head-on collision,” Lewis said. “Crews arrived and found a serious two-vehicle accident with extensive damage to both vehicles. One patient was medically entrapped, and that patient was extricated and transported to Mercy Air Base 21 for flight to UMC Trauma. Crews remained on location to further assist the sheriff’s office.”

On Thursday, Dec. 13, fire crews responded to a mutual aid and rescue assignment along Highway 160 at mile marker 22 in Clark County for a motor vehicle crash at approximately 7:40 a.m.

“Upon arrival with Clark County units, crews found a one-vehicle rollover accident with one patient entrapped,” Lewis said. “We were in an assist mode with Clark County Rescue. Our heavy apparatus was canceled and that patient was flown to UMC Trauma. We also had off-duty firefighters who were on their way to work and assisted at the scene.”

On Friday, Dec. 14, emergency crews were dispatched to the intersection of Homestead and Kellogg roads for a reported multi-vehicle collision just before 3 p.m.

“Upon arrival, we found a three-vehicle accident involving a head-on collision,” Lewis said. “We completed a scene size-up and rescue assessment and found no entrapment, however three people required an assessment, where two people were subsequently transported to Desert View Hospital. Mercy Air 21 had been placed on standby, but was released.”

On Saturday, Dec. 15, fire crews responded to another mutual aid and rescue assignment in the Wheeler Pass area at approximately 4:18 p.m.

“We were dispatched for a report of an off-road accident,” Lewis said. “This was part of a mutual aid assignment with Clark County rescue units and the Division of Forestry. This was an ATV accident involving a 60-year-old female with the vehicle resting on top of her.

“That vehicle was removed and the patient was transported from the scene partially by a personal vehicle. We rendezvoused with them and brought the patient down the rest of the way. ..”

On Monday, Dec. 10, fire crews were dispatched to Highway 160 at Irene Street for a multi-vehicle crash, caused by a wild horse crossing the highway. “Crews arrived to find a three-vehicle accident where at least two of the vehicles sustained significant damage, with the horse deceased,” Lewis said.

On Dec. 7, a man and his dog have the “virtual assistant” Siri to thank for their rescue at the dry lake bed on the south end of town.

“At approximately 8:35 p.m., crews were notified of a one-vehicle rollover that occurred somewhere on the dry lake bed, south of Homestead Road,” Lewis said.

“The thought is that he was unconscious for a while and what we were told was that he may have been out there for several hours,” Lewis said.

“There was no illumination affixed to the vehicle, so there was no way for him to turn the lights on where we could identify where he was. He also had no cell phone service, so it was our understanding that he said, ‘Siri, call 911,’ and it appeared that it worked. That’s when he was able to report the accident, but it is unknown how long he was unconscious.”