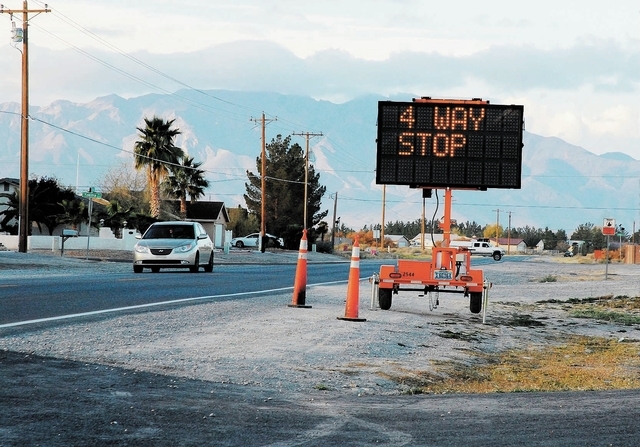 The new stop signs will be installed Dec. 16, Carlo said.

The two intersections were the only ones out of seven that met traffic warrants for four-way stop signs, he said.

There were 10 accidents at Calvada Boulevard and Blagg Road with one major injury in the past three years, Carlo said. That intersection had an average traffic count of 2,625 vehicles during an eight-hour period.

The intersection of Bell Vista and Blagg Road had one fatal accident with three major injuries. The average daily traffic count was 2,805 vehicles.

In other business, Nye County Public Works Director Dave Fanning told commissioners a federal grant application to rebuild 8/10ths of a mile of streets in Manhattan made a short list. If approved, it could free up $1.3 million for repaving a mile of Barney Street and Gamebird Road on the southwest side of Pahrump, as well as Homestead Road between Gamebird Road and Manse Road and Dandelion Street between Homestead Road and Malibou Avenue. Leslie Street from Highway 372 to Zephyr Avenue would also be repaved.

Commissioner Dan Schinhofen thanked public works for the skin patching on Dandelion Street as a stop gap measure. He used the occasion to continue his push to enact an increase in the four-cent per gallon local gas tax. He said the gas tax has been at that amount since 1988. Schinhofen compared the cost of paving a mile of road in 1983, which was $80,000, to the $200,000 per mile it costs now. In the meantime, he said the county has collected about $500,000 less in gas taxes per year because of better fuel efficiency.

“I will be taking it back to the board for the board to make a decision to put it on the ballot again for a three-cent increase in the gas tax,” Schinhofen said.

He wanted to wait for the county commission to pass a half-cent sales tax increase first.

As an alternative to a vote by the Board of County Commissioners Schinhofen said the ballot question could be rewritten for an upcoming election. He said hopefully voters will read the question this time.

Fanning said county commissioners wanted to study a four-way stop at Kellogg Road and Homestead Road, but it didn’t come close to meeting traffic warrants for accidents. Schinhofen said, “my daughter was T-boned there.”

A recent tour by the Nevada Department of Transportation deputy director opened some eyes about road improvements needed in Nye County, Fanning said. Besides touring the sites of potential roundabouts, NDOT visited the problem intersection of Wilson Road and Highway 160 and discussed eventually widening Highway 160. The tour was part of a campaign pledge by Nevada District 36 Assemblyman James Oscarson, R-Pahrump.

Schinhofen said he’s attempting to get the U.S. Department of Energy to contribute funds to widen Highway 160 from Pahrump all the way to Highway 95, as part of the compensation for the shipment of 403 canisters of uranium 233 and uranium 235 to the National Nuclear Security Site.

Commissioner Frank Carbone said he wants a left-turn lane on Highway 160 at the junction of Highway 95.