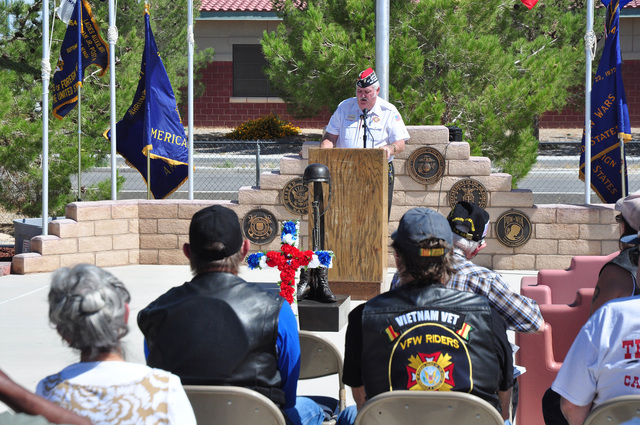 It has been 98 years since allies of World War I signed the armistice truce with Germany to end that war on Nov. 11, 1918, giving birth to what is now Veterans Day in this country.

The date was declared a national holiday in many allied nations and coincides with Remembrance Day and Armistice Day.

In Pahrump, Veterans Day observances are scheduled to take place at two locations today, honoring the more than 9,000 veterans in Nye County.

The veterans’ section at Chief Tecopa Cemetery is holding its annual Veterans Day ceremony beginning at 11 a.m., along with ceremony at the VFW Post on Homestead Road at the same hour.

The cemetery is located on East Street adjacent to the library.

Retired Marine 1st Sgt. Jose Tellas urged the community to attend the ceremony, in support of all veterans.

“I love my fellow veterans and I have seen them in combat getting wounded and dying for freedom,” he said. “I would do just about anything for my fellow veterans. They truly deserve to be recognized every day and not just on Veterans Day.”

Unlike past Veteran Day observances, Tellas said he’s hoping a recent request he made to Nellis Air Force Base officials is fulfilled this year.

“I spoke with officials at Nellis Air Force Base and got an Air Force flyover approved,” he said. “I have submitted all of the paperwork they needed and they told me everything was in order and I will receive a phone call confirming the flyover but no one has called me just yet. So it’s still kind of up in the air so to speak.”

Additionally, Tellas said at least two elected officials will be on hand.

“We will have commissioners Frank Carbone and Butch Borasky, who will be involved in our wreath-laying ceremony for our deceased veterans,” he said. “This is all community-oriented and we have no professional outsiders coming in. The Pahrump Valley High School Junior ROTC program will also be performing during the ceremony.”

“We will have a radio-controlled P-51 Mustang in the air as we do the Pledge of Allegiance,” he said. “While saluting the flag, the plane will fly and do a victory roll. We also invited the Paiute Nation from Moapa, so we are looking forward to having a very memorable Veterans Day observance on Friday at 11 a.m.”

Commander Tom Vick from the VFW Post on Homestead Road invited the community to his ceremony, also beginning at 11 a.m.

Vick also noted the distinction between Veterans Day and Memorial Day in this country.

“We will also have a flag retirement ceremony from our local Boy Scout troop,” he said. “After the ceremony, there will be hamburgers and hot dogs for everyone.