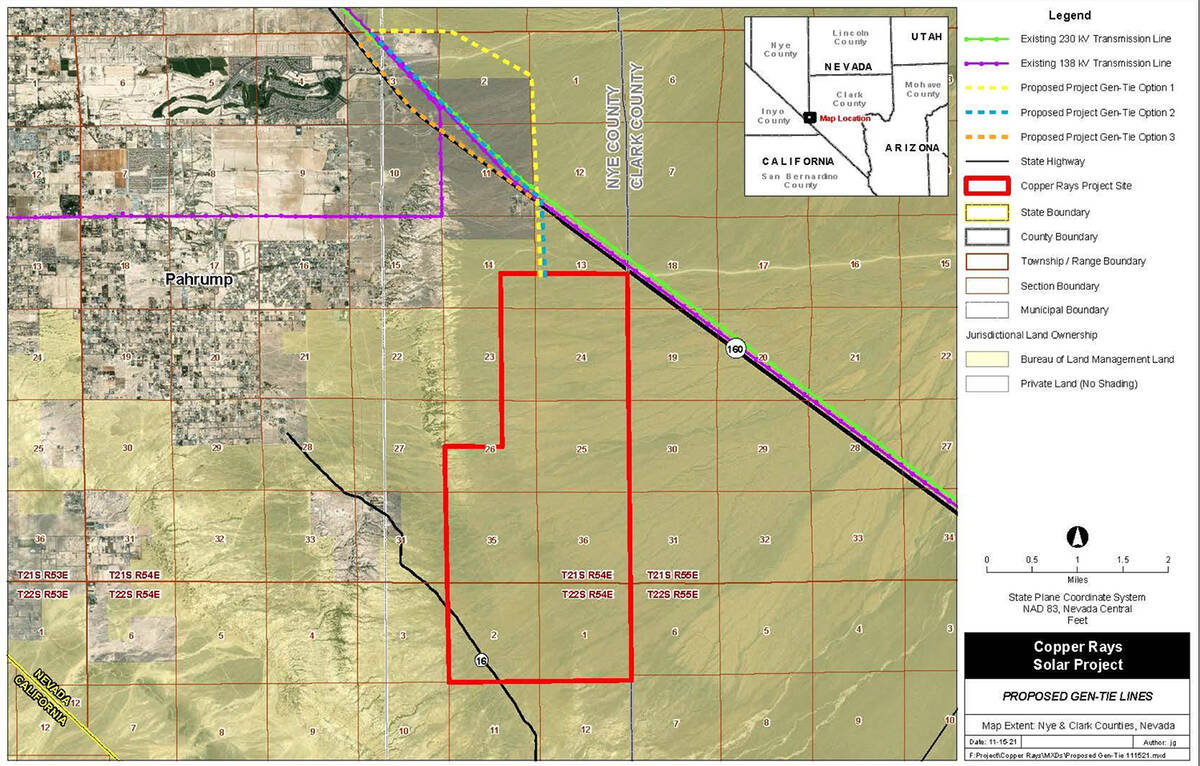 Special to the Pahrump Valley Times This map, provided on the BLM's website, shows the proposed project site for the Copper Rays Solar Project.

In recent months, the subject of large-scale solar projects in the Pahrump Valley has caught the attention of area residents who are none too pleased with the concept of turning huge swathes of the desert landscape into fields filled with thousands of solar panels.

Their reasons are many and varied but their message has consistently been the same, with opponents banding together to express their belief that such projects should not be placed where they will have a negative impact on those who live in the area, or on tourists who come to the valley.

As it stands today, there are two proposed solar farms that would lie solely in the southeastern-most portion of Nye County, including the Rough Hat Nye County and Copper Rays projects, and another set of solar fields proposed for the lands just over the border in Clark County, including Yellowpine and Rough Hat Clark County, as well as a fifth project, Sagittarius, which would straddle the two counties.

Thus far, the company that is proposing the Rough Hat projects, Candela Renewables, has been the focus of the public’s opposition but with the Bureau of Land Management set to hold two public meetings on Copper Rays next week, residents are likely to turn their attention to this project in an attempt to ensure their voices do not go unheard throughout its application process.

“The Bureau of Land Management Pahrump Field Office will host two virtual information forums, Dec. 15 and 16, to gather input on the Copper Rays Solar Project, proposed on approximately 5,127 acres of BLM-managed public land located in the Pahrump Valley in Nye County immediately adjacent to the county line, southeast of the town of Pahrump and approximately 40 miles west of Las Vegas,” information on the upcoming meetings details.

The solar field would follow the Nye County/Clark County border south of Highway 160 and jut over to the west, where its far western border would sit alongside much of the eastern border of the Rough Hat Nye County project.

“Copper Rays Solar LLV has applied for a right-of-way grant to provide the necessary land and access for construction, operation and eventual decommissioning of a proposed 700 MW solar facility including battery storage facility and interconnection to the regional transmission system on BLM-managed public land,” the BLM’s website states.

“The information forums are being held as part of the solar application evaluation process and information gathered during the public input period will inform BLM’s determination on whether to continue to process or to deny the Copper Rays Solar Project’s right-of-way application.”

The virtual public forums are set for Wednesday, Dec. 15 and Thursday, Dec. 16 from 6 to 8 p.m. both evenings. These meetings will begin with a short presentation on the application evaluation and the project itself and will then continue with a question-and-answer session, followed by a public input period.

To register for the Dec 15 meeting visit bit.ly/3ouZVGV

To register for the Dec. 16 meeting visit bit.ly/3rKcCA2

Anyone who experiences difficulties registering for the meetings can contact 864-901-3832 for assistance.

Those who simply cannot attend the virtual meetings will have the opportunity to provide their thoughts on the matter via written comments.

Public input will be accepted until Friday, Jan. 7, 2022. All public input comments are a matter of public record.