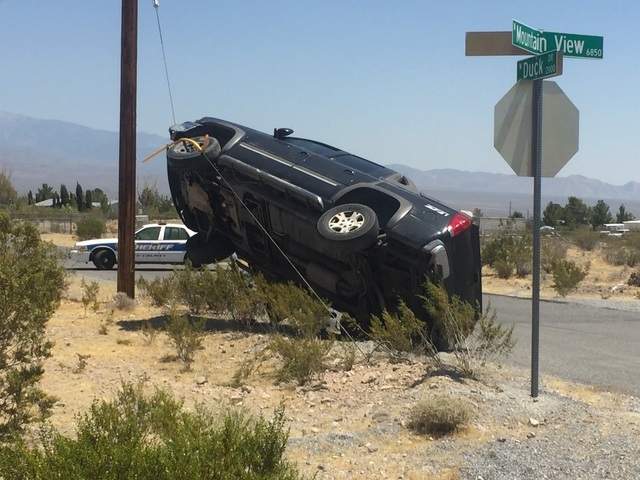 Special to Pahrump Valley Times No injuries were reported after the driver of a pickup truck lost control and ended up suspended on a ‘guy wire’ at the intersection of Mountain View Avenue and Duck Street Sunday afternoon. It took VEA crews roughly 25 minutes to restore power after the vehicle was disentangled from the wire.

Guy wires are tension cables used to add stability to a free-standing structure.

Crews arrived on location and found a vehicle precariously astride a guy wire used to support a utility pole, he said. If it had come in contact with an energized line by accident, the driver could have been electrocuted or could have fallen a great distance.

Lewis noted that a tow truck was employed to remove the vehicle from the wire, as VEA crews monitored the task.

James Andresen, manager of operations for VEA, said the utility received word of the incident at 1:30 p.m.

At 2:58 p.m., crews de-energized the tap feeding two consumers and assisted the tow truck driver in untangling the truck from the guy wire, Andresen said. The car was removed and service was restored at 3:23 p.m. The truck did not cause an outage, the power was turned off for safety reasons while the truck was removed.

The driver of the vehicle was not injured.

On Friday evening, fire crews responded to the area of Highway 372 and Charleston Park Avenue after a suspected drunk driver hit a ditch, lost control of his vehicle, and went airborne, before landing in a second ditch.

Lewis said the man sustained facial trauma as a result.

Upon arrival we found a vehicle that had left the roadway and it looked like it had launched into the air, he said. It came down on the opposite side of the highway with great impact. The driver sustained pretty serious facial trauma. He was evaluated on the scene and ultimately transported to Desert View Hospital.

Lewis said its unclear whether the driver was wearing a seat belt at the time of the crash.

There are indicators that show that driver may not have been restrained, he said. No other vehicles were involved and driver intoxication is part of the investigation by Nye County Sheriffs deputies.