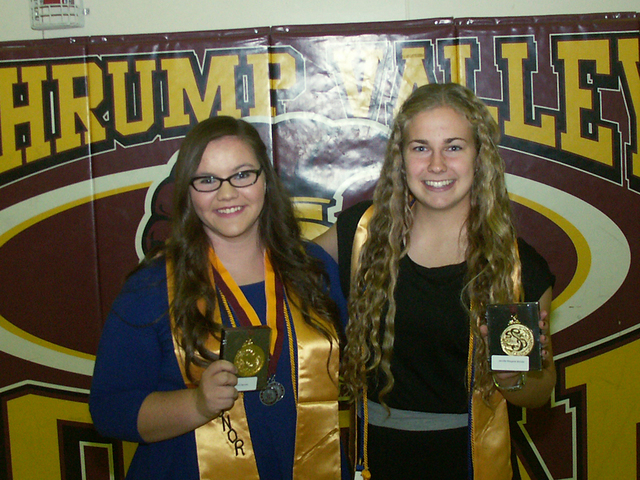 Sposato has good reason as her achievements inside the classroom earned her the school’s highest academic honor — valedictorian.

“It feels really good. I’ve had a lot of stress lately dealing with college applications and taking exams. Once I got through my Advance Placement (AP) exams, I really felt relieved. It’s now coming to an end and it feels bittersweet,” she said.

The valedictorian carries a 4.666 grade point average which got the attention of the University of Arizona.

Sposato accepted an academic scholarship and plans to become a “wildcat” this fall where she will study the well-known field of Bioinformatics, which is described as interdisciplinary scientific field that develops methods and software tools for storing, retrieving, organizing and analyzing biological data.

The valedictorian also had a few words of advice for underclassmen.

“Always believe in your abilities and don’t shy away from hard classes or clubs because you feel you can’t commit to them. It’s best to work as hard as you can during your freshman year because if you fall behind, it can be hard to catch up,” she said.

Sposato’s father Lou obviously had nothing but praise for his graduating daughter.

“It was all through hard work. She’s a very bright student and even though it involves a little luck but mostly hard work and we couldn’t be more proud of her. In her freshman year we helped to guide her on her path, but to be honest she was always very motivated like her sisters who set a great example for her,” he said.

Sposato also noted that tonight’s graduation will be the final, at least for his daughters.

In recent years, he and his wife saw the graduation of Andrea’s two sisters, who were accepted at the University of Nevada Reno and Arizona State University.

Sposato said when both Arizona schools compete in future sporting events, he and his wife will be faced with somewhat of a dilemma.

“That’s a tough one but obviously we are going to split our affiliation and probably just swap sides on the 50-yard line at halftime, but it’s a very nice problem to have,” he said with a laugh.

Her academic and athletic prowess landed her a scholarship to study at Idaho State University.

McCaw said she’s interested in pursuing an exercise science program at the school, but she is still weighing her options.

“With a degree there, it could possibly lead on to the field of physical therapy or even go to medical school but I’m still not completely sure about it. I thought about politics but I don’t know if I want to make a career out of it,” she said.

On the issue of her academic success McCaw believes hard work will always help to move students forward as they reach the college level.

As a member of the honor society and several other academic clubs, McCaw also provided some thoughts on the last four years of high school.