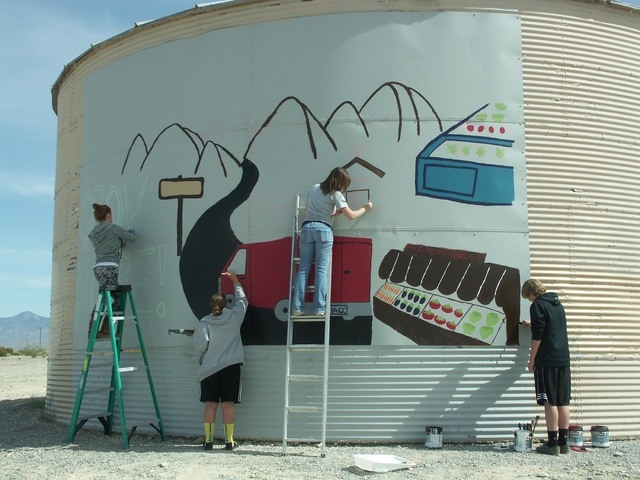 Officials with NyE Communities Coalition are again taking on the issue of hunger within Nye County.

Coalition representatives are expected to meet with Joel Berg, the chief executive officer of the U.S. Anti-Hunger Coalition, in Pahrump on Friday.

According to his bio, Berg is a nationally recognized leader and spokesperson in the fields of domestic hunger, food insecurity, obesity and poverty.

The group painted the old grain silo on Panorama Road and Shoshone Drive in front of the Pahrump Valley Auto Mall.

McKillips said aside from the ribbon-cutting ceremony, Berg will provide information on anti-hunger strategies and programs for rural communities like Pahrump.

“This will be his first visit to Pahrump,” she said. “He’s also coming to view the community as a whole and see if he can identify any factors that are related to anti-hunger and possibly help bring some of those programs right here.”

The newly painted mural graces an abandoned grain silo in town, which for years was a regular target for local graffiti artists.

“The owners of the silo knew about the graffiti and they didn’t want it to continue being an eyesore, but they did want to attract some positive attention,” she said. “They were very welcoming to it. Along with the mural, we also put a message that inspired people to grow hope.”

“We’d loved to have as many people that want to come and see it,” she said. “Our youth worked all through their spring break on it. It took us a full week from Monday through Friday for several hours each day. We’re inviting everyone from the community to come look at it because it’s such a unique project.”

McKillips said Berg, since 2001, has led the New York City Coalition Against Hunger.

The coalition represents the more than 1,100 nonprofit soup kitchens and food pantries in New York City and the nearly 1.5 million low-income New Yorkers who live in households that cannot afford enough food.

Prior to his work with the anti-hunger coalition, Berg served for eight years in the Clinton administration in senior executive service positions at U.S. Department of Agriculture.

He also acted as USDA Coordinator of Community Food Security, where he created and implemented the first-ever federal initiative to better enable faith-based and other nonprofit groups to fight hunger, bolster food security, and help low-income Americans move out of poverty.

According to a U.S. Census Bureau report, the poverty threshold for a family of four was $23,283 last year.

Compared to other state counties, Nye was the hardest hit, with 29 percent of children in poverty, according to the report.

By comparison, an estimated 23.7 percent of children in Clark County were in poverty in 2012.