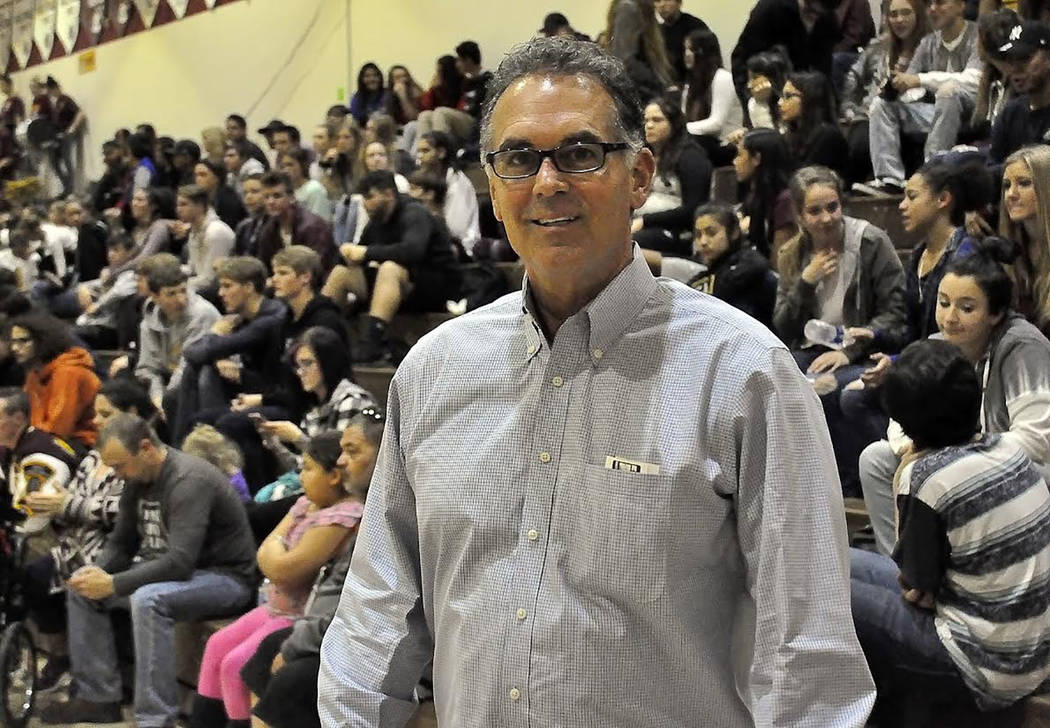 The candidate filing period for the 2018 election may still be a month off, but many contenders’ campaigns are already underway.

As part of his campaign for a U.S. Senate seat, Republican contender Danny Tarkanian visited the Pahrump Valley in January.

Tarkanian attended a Pahrump Valley High School girls basketball game, giving himself the chance to speak with local residents and enjoy a night of athletic entertainment. He also took the time to meet with members of the local press, providing an overview of his bid for senator.

Tarkanian detailed that the main impetus behind his run for U.S. Senate, rather than Congress as he was originally planning, was behavior by his opponent, Republican incumbent U.S. Senator Dean Heller, during and after the 2016 General Election.

“I ran for Congressional District 3 last election and lost by one percent, in the closest race that anybody on the GOP side had in Nevada,” Tarkanian explained. “I was planning on running again in that district, because I figured I could make up that one percent. And I supported candidate Trump throughout the campaign, took a lot of heat for it but I thought it was the right thing to do. The guy who is in the Senate right now, Dean Heller, came out and made it very, very clear that he opposed Trump.”

Tarkanian said he was approached by citizens who requested he run against Heller so Tarkanian could, “…go to Washington D.C. and support Trump.” Heller’s lack of support for the president during Trump’s campaign for the presidency disappointed him, Tarkanian said, noting that he himself desires nothing more than to be able to bolster Trump’s objectives in the coming years.

“I am a big believer in what President Trump has articulated with his ‘America First’ policies. We start putting Americans first, hardworking, middle-class Americans … They need someone back in D.C. to be their voice,” Tarkanian declared. “We need to start voting for things that these people will benefit from as opposed to globalists’ issues and policies where we are taking care of the rest of the world first.”

While Heller may have publicly denounced both Trump and the repeal of ObamaCare in the past, he has apparently since changed his stance. When reached for comment on the upcoming election and Tarkanian’s campaign, Heller stated that he is, in fact, supportive of Trump and his policies and has been working to see proposals from the Trump administration pushed through.

“While Danny has been busy trying to explain why he’s running for his sixth office in 14 years, Dean and President Trump are getting things done,” a statement from Heller’s campaign asserted. “Whether it’s repealing the ObamaCare individual mandate or cutting taxes on the middle class, Dean Heller and Donald Trump are working together to move our country forward. President Trump has signed 15 other bills Dean Heller championed over the past year, and Heller is a co-sponsor on the ObamaCare repeal bill the president is backing.”

Heller’s campaign is also taking an immediate offensive stand, using the opportunity to denounce Tarkanian and his entire political career. “Danny is a failure and a fraud that is so desperate to not lose another race, he is just making up nonsense as he goes along,” the campaign statement concluded.

Thus far, one other Republican and three Democrats have announced intentions to run for the U.S. Senate seat in 2018. Heller and Tarkanian are set to face off with Sarah Gazala in the Republican primaries while Jacky Rosen, Bobby Mahendra and Jesse Sbaih will contend with each other in the Democratic primaries. Both primary elections are set for June 12.