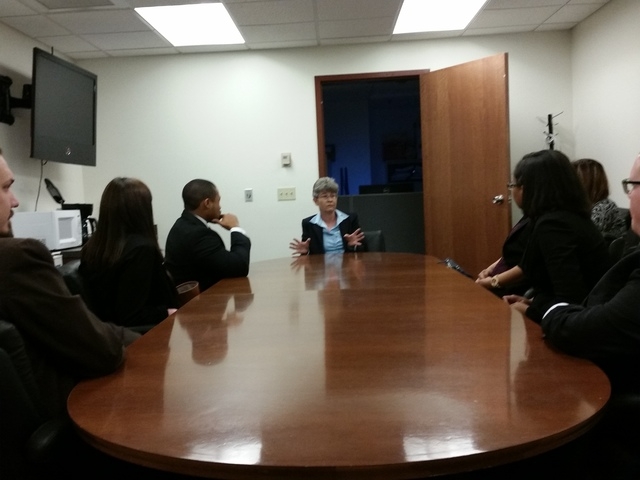 A group of students from University of Nevada, Las Vegas’ Boyd Law School took part in a program dubbed “alternative spring break” in March, where one of the days drew them out to Nye County to see the legal system in a rural setting.

The group of six students spent time in Pahrump as well as Amargosa Valley, meeting judges and lawyers in the area and getting a firsthand feel how law is handled in the county.

Nikki Harris, alternative spring break coordinator at UNLV, said the program in its fourth year tries to spend equal time in the north and the south part of Nevada since they are the only law school in the state. The law school uses the program to promote public interest.

After spending time up north in Carson City last spring break, this year the program found its way closer to UNLV and made the 70-mile-plus drive to Nye County.

“I wanted to do something this year that was more close to home for the students who were likely to wind up working in Clark County when they graduate,” Harris said. “One of the challenges was how far did we have to go where they could experience something that is considered more rural than Las Vegas.”

For Harris and most of her students it was their first time visiting Nye County so they really didn’t know what to expect.

“I heard plenty about it and knew it was a short drive and I was encouraged to take a look to see what’s different between Nye and Clark county, as far as practice of law and the needs of citizens in that area, ” Harris said.

One of the students that took part in the trip, first-year law student Seleste Hamilton, said that the alternative spring break intrigued her.

“It seemed like a really great opportunity to not only meet the attorneys and judges but also being able to visit Pahrump and Amargosa Valley to help individuals with legal topics,” Hamilton said.

The group worked with Nevada Legal Services while spending their day in the area, as they conducted a forms clinic in Pahrump.

“Where law students will assist attorneys at Nevada Legal Services in the ‘ask a lawyer’ program where they help people fill out civil, self-help forms,” Harris said.

Nevada Legal Services and alumni of UNLV in the area also helped set the group up with the right local contacts to ensure they got the full legal experience in town.

“That enabled students to meet people that practiced somewhere a little differently and hear the differences between the Regional Justice Center (in Las Vegas) and the Fifth Judicial District Court,” Harris said.

In addition to local attorneys, students also met with Fifth Judicial District Court Judge Kimberly Wanker, who gave them an in-depth look at the court system in Nye County.

Despite talking about several aspects of the legal system in Nye County, a few topics stood out more than others to Harris and her students about the difference between the two neighboring counties.

With public safety a major concern in this day and age, especially in state and county buildings, the group was surprised how lax things were at the Pahrump Justice Center.

“The biggest thing that we are still talking about is that there is no security in the courthouse,” Harris said. “That was blowing our mind and still does.”

With what they heard from Judge Wanker about instances that have occurred in the past, they were even more taken aback by the lack of security that was present in the court.

Harris went on to say that through the stories they heard, that carrying a weapon seemed to be the norm in Nye County, but is unheard of from the judges in Clark County.

Another aspect that the group found interesting is how the legal cases in the county intertwined with one another.

“We also spoke to the judge about the types of cases she encountered as well as what clients Nevada Legal Services work with and the types of issues and how they overlap and don’t stay in just one particular practice area,” Harris said. “So that was very intriguing as well.”

In addition, the drug court that is in place here in Nye County was another area of the legal system that drew the spring breakers’ interest.

“Judge Wanker took students on a tour and also discussed the drug court as a way to try to rehabilitate, as opposed to punish necessarily,” Harris said. “It did seem a little more hands-on and more of a caring approach to really try and help families that were in the system.

“One story the judge told us was that any given day you could have a defendant and victim who could be person A and B, but tomorrow they could switch roles and oftentimes drugs were a part of that.”

Hamilton agreed, as talking with Judge Wanker and the attorneys she grasped that there were more drug-related legal issues in Nye County compared to what she’s seen in Las Vegas.

“Compared to Las Vegas, there seems to be more issues with drugs in Pahrump, which I thought it was cool that they had the drug court, to help with the problems dealing with drugs,” Hamilton said.

One of the goals of the alternative spring break program is to try and get law students to consider working in a rural area of the state once they graduate and after the day spent in Nye County there was some talk of that.

“Actually, one of our students, she was born and raised in Las Vegas and said after being up there and speaking with the attorneys we met with that her eyes are open and she’s not saying she won’t stay in Las Vegas, but now there is more opportunity to see what else is nearby,” Harris said. “We also had a few students discuss the more hands-on approach, as far as the ‘ask a lawyer’ type of questions that they were being asked.

“So I think students were a lot more curious about the area than they expected to be.”

Hamilton concurred, stating that she is actually considering doing some form of legal work in Nye County while she completes her schooling.

“I’m looking into helping with Nevada Legal Services while I’m in law school with Pahrump form clinics,” she said. “Because of what I’ve seen on the trip, I would also like to do pro bono work in Pahrump. I plan on living in the Las Vegas area after I’m done with school, so I’d like to go up and help some of the people out there, who might not have access to affordable legal assistance.”

In all Harris said the experience was a success and that they will consider returning to the area for future alternative spring breaks.

“The big thing was getting out of Las Vegas for the day and seeing the different opportunities and issues that were presented to us while in Nye County,” she said.