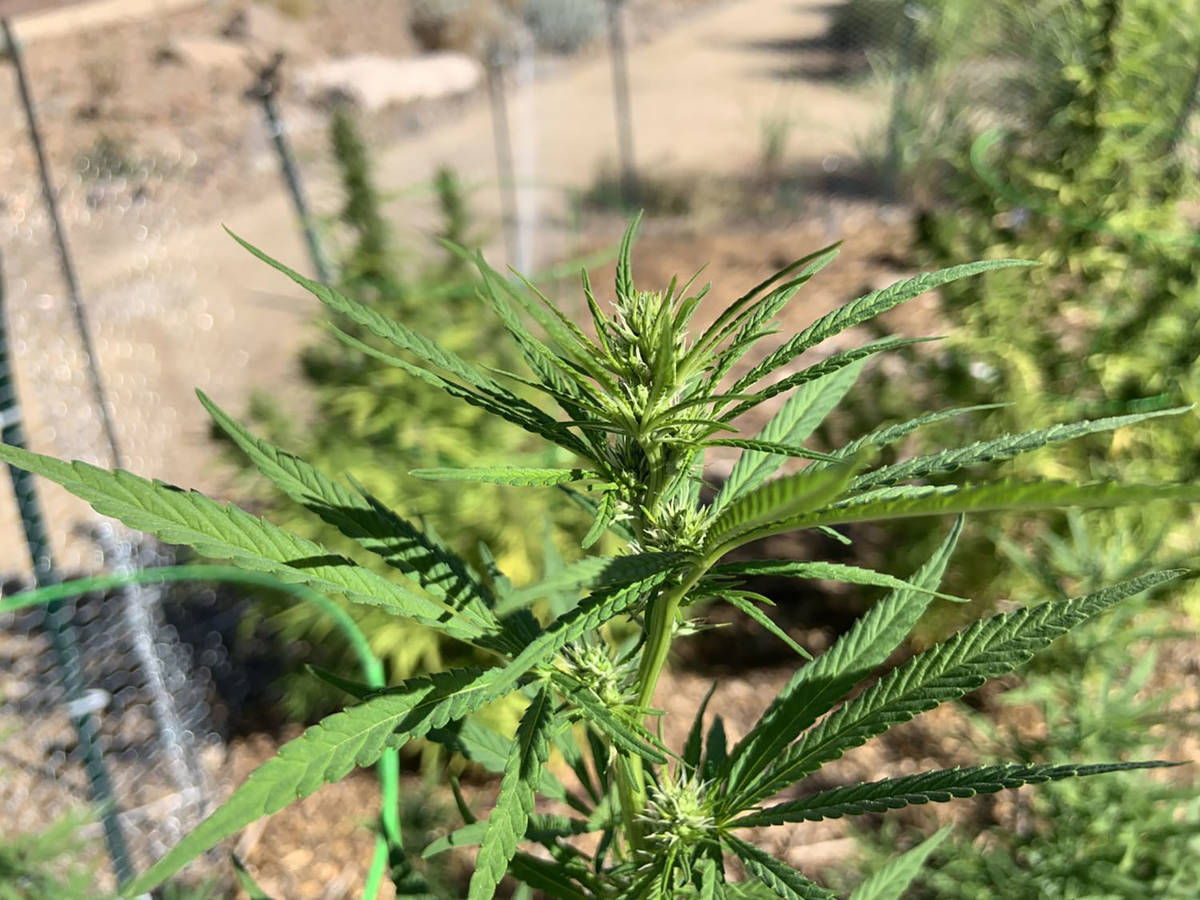 Special to the Pahrump Valley Times The cherry wine variety of hemp growing at the University of Nevada, Reno Extension’s Botanic Gardens in Clark County.

Hemp uses less water than many other crops, and its uses and popularity are growing. As a result, there is increasing interest in growing hemp in Nevada.

University of Nevada, Reno Extension is now researching hemp varieties and best practices for growing it in Nevada and offering online classes on the research findings. The work is being led by M.L. Robinson, an associate professor and horticulture specialist with Extension, with help from Extension’s Marysia Morawska, Lauren McGue and Master Gardener volunteers.

Hemp is currently being grown many places throughout the United States, primarily for CBD, which is used in topical oils and creams, among its many other uses.

Although there are a variety of qualities in hemp, such as grain and fiber for linen-like cloth, facilities for processing the grain and fiber are rare. As part of their work with hemp, the Extension team hopes to show that the diverse uses of the crop have just as much, if not more, market value than growing it solely for the cannabinoid features.

“There are really positive results that we’re seeing in similar climates to Nevada when it comes to the growing of dual-purpose hemp crops,” Morawska said. “Fiber, grain, hurd and oils, to name only a few, make up a huge part of the growing hemp economy, and Nevada can be a leader in the market, but we have to find the right plant genetics that work in our region. There is so much potential in this work.”

Morawska began her work with hemp after taking horticulture classes, where she realized her passion for growing and nature. She joined Extension’s Master Gardener Program to further her knowledge and became involved in community education, where she presented at hemp education conferences across the country and around the world, speaking on genetics, growing practices and market trends to update growers on the hemp industry.

Morawska wanted to do further research and share her expertise with those expressing interest in growing it in the state. She teamed with Robinson, who has been with Extension as a horticulture specialist since 1996 and had been doing some preliminary research on hemp. Robinson has conducted research on numerous plants and crops at the Center for Urban Water Conservation, including palms and desert plants, such as succulents and hops, which are in the same plant family as hemp. Much of his research has centered on best low-water-use crops and varieties for growing in Nevada’s semi-arid climate.

Robinson and Morawska have hosted introductory workshops for the past few years, detailing federal guidelines and giving an overview of the different compounds of the plant available for further production. With growing interest and sold-out classes, they saw the opportunity to expand the curriculum beyond basic introductory courses.

So, the two started growing a handful of plants last year at Extension’s Botanic Gardens in Clark County in order to begin assessing the best practices for growing hemp in Nevada climates. They tested six varieties, primarily cherry wine and berry blossom, starting the seedlings in a greenhouse and then moving them outdoors to see how they would do in Southern Nevada’s climate. Since the project started in such a small capacity, the data gathered was mostly notes about growth sizes, pesticides and pollination to inform best practices for this year’s project.

This year, with help from McGue and Extension’s Master Gardeners, the team planted 11 varieties of hemp at the Botanic Gardens to continue to research which ones grow best in Nevada’s desert environment. While the majority of the plants are cherry wine, blue Hawaii, sweetened, sisters, hot blood, la crème, Brutus and lifter, some other varietals are also being tested.

As part of the process, the team is developing best practices for maintaining proper water and nutrient levels. In addition, they are collaborating with the University of Arizona and New Mexico State University to add to the growing library of research on both the benefits and drawbacks of hemp production and how those benefits and drawbacks change when the crop is grown in a semi-arid climate. Robinson is also doing extensive research to compare growing hemp in Nevada with other dry climates, such as in Iran and Middle Eastern countries.

“Although hemp is a great crop in many ways, there’s still a lot of research to be done,” Robinson said. “Yes, it uses less water than, say, alfalfa, but it still uses more water than some other crops. There’s a lot of information out there on hemp, but we want to narrow down the research to see how best to grow it and make it a major industry in Nevada.”

Coinciding with their research, the team is developing online classes for those interested in growing hemp, to promote it as a crop for Nevada and provide research-based information for successful production here. The training will take producers through the hemp-growing process, including creating a business plan and getting proper licensing and certification. The team hopes to begin offering classes in early 2021, with the help of Extension’s Master Gardener Program.

For more information on upcoming hemp classes or research, email Robinson at robinsonml@unr.edu