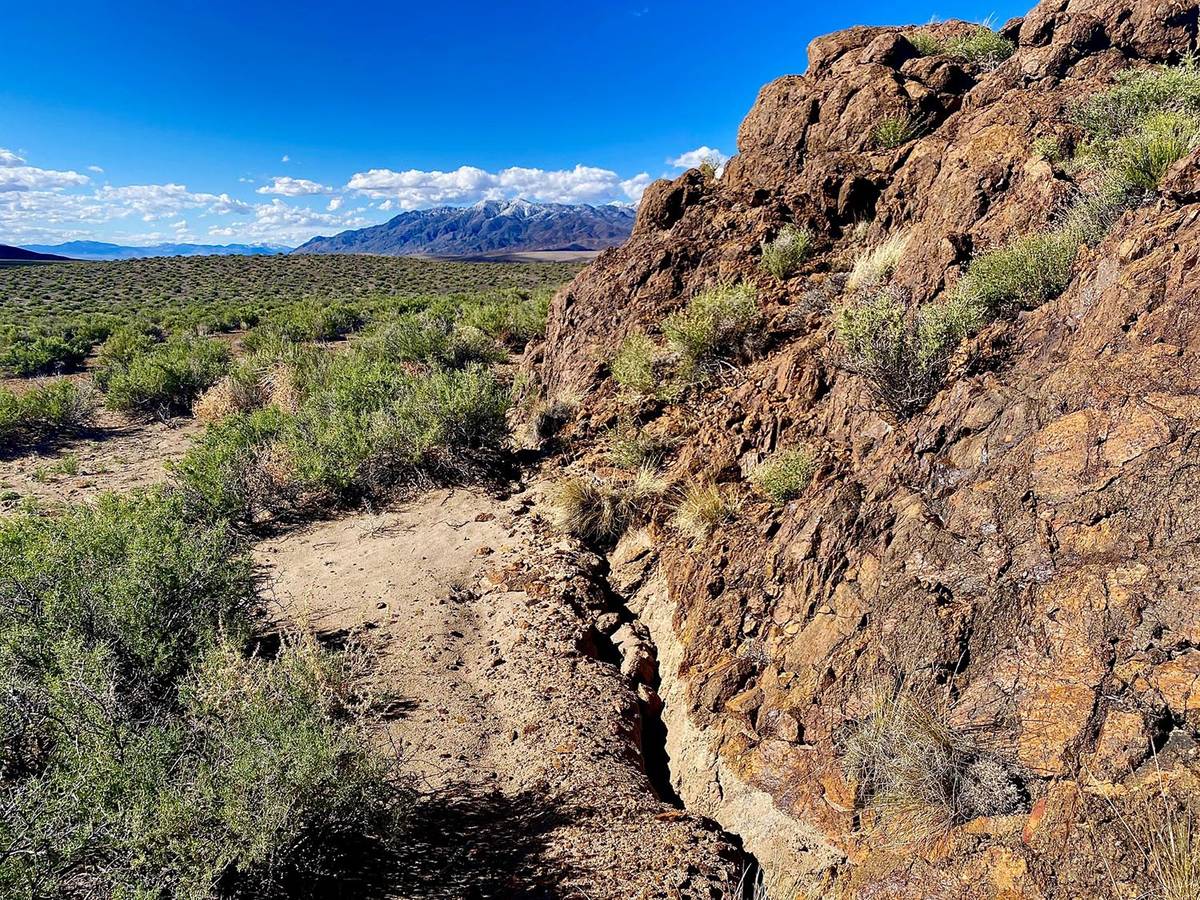 Special to the Pahrump Valley Times The surface rupture mapped by the University of Nevada, Reno field teams extends for about 6 miles west of Highway 95. Only minor surface cracking was observed east of Highway 95 in the vicinity of the epicenter.

Two weeks after the magnitude-6.5 Monte Cristo earthquake woke Nevada, the Nevada Seismological Lab said it has tracked 6,500 aftershocks, including four at magnitude-5.0 or greater.

“The aftershocks could continue for years, a decade,” said Ken Smith, seismic network manager and associate director of the Nevada Seismological Lab in the University of Nevada, Reno’s College of Science. “The large 1954 earthquakes in December of that year were preceded by a series of large magnitude earthquakes and aftershock sequences that began in July. So this may be an indication that this is not over.

“Fortunately, today we have real-time data to observe the progress of activity that may suggest another larger event. Keep in mind, though, each one of these energetic aftershock sequences following large Nevada earthquakes evolve in their own unique ways.”

Within minutes of the 4:03 a.m. Monte Cristo earthquake on May 15, the lab began verifying the automatic notification of the largest quake in Nevada in 65 years and worked with the USGS to get the data out to the public. It also set in motion a flurry of activity to get members of the lab to the event site to place additional seismometers to better monitor the activity.

Eight temporary telemetered seismographs and a local microwave telemetry system were installed, beginning on the first day, that bring the data directly back to the university on the seismology lab’s statewide microwave network. Other partnering agencies, including USGS and Mission Support and Test Services from the Nevada National Security Site, installed additional instrumentation.

The Nevada Geodetic Laboratory, a unit in the university’s Nevada Bureau of Mines and Geology, continues to actively measure ongoing crustal deformation in the area. They use Global Positioning System satellites and ground stations to study tectonic movement. Owing to work they had done weeks earlier, they had sensors on the ground and recording data in the area when the event happened. So far they have seen permanent movement of the ground more than 120 miles from the epicenter.

The lab is deploying additional GPS stations at 30 locations around the epicenter and aftershock sequence of the earthquake. All of these stations will be visited multiple times in the coming months to download continuous observations.

“We can expect earthquakes in Nevada,” said Jim Faulds, director of the Nevada Mines and Geology in the College of Science. “They’ve happened for millions of years in the Walker Lane.”