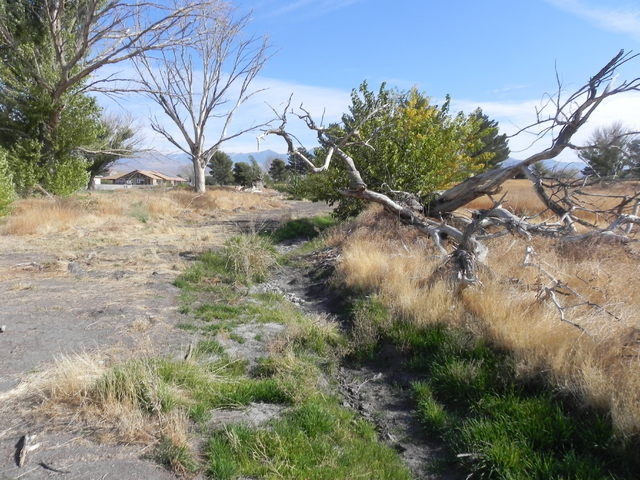 Utilities Inc. of Central Nevada President Wendy Barnett criticized county leaders Wednesday for holding up plans to remediate the ponds at the old Willow Creek Golf Course and clean up the property.

Barnett told Nye County Commissioners during public comment the company is reviewing bids for the remediating work, but they’re being held up by the county because the utility is unable to find out what Nye County Code requires.

Barnett said they applied for a grading permit from the Pahrump Building and Safety Department on Sept. 5 and were told it would be a short turn-around time.

“There’s discussion whether a conditional use permit would be required or not,” Barnett said. She asked Nye County Planning Director Darrell Lacy what the special condition would be that required the permit.

“I’m remediating land,” she said. “There are open bodies of water out there. That’s all I’m doing. The reply referred to the sewer plant. I’m not doing anything at the sewer plant whatsoever. I’m trying to remediate an environmental hazard.”

Nye County Manager Pam Webster said the item needs to be addressed in an agenda item.

“This is totally not the place to discuss this,” Webster said. “We will put it on the next agenda. We keep having these public comments and I want staff to be able to address it in a public meeting.”

Utilities Inc. received title to the 15 of the 16 parcels of the former golf course in September as part of the bankruptcy hearings by former owner Caldera P and G, to settle $1.7 million in legal claims. The golf course closed in October 2008. Ponds on the property used recycled effluent from the UICN sewer plant is used for irrigation, the effluent is also sent to irrigate Lakeview Executive Golf Course, which is still open. But the ponds were allowed to deteriorate to the point they were called an environmental hazard in the Fifth Judicial District Court.

“I’m here to work with you in any way we can to get it remediated as quickly as possible,” Barnett said. The utility company received approval for the project from the Public Utilities Commission and Nevada Division of Environmental Protection, she said.

The utility plans to construct a new five-acre receiving pond and remediate the existing lined ponds, which will be equipped with floating aerators. They will also rehabilitate pump stations and clean up the property. The company plans to remove 143 dead trees; removing and burning debris piles; protecting three trees that have active bird nesting; weed abatements for the back nine and mowing the front nine to reduce weed seed production and encourage healthy turf growth; removing salt cedar trees; providing a dust control palliative application for the back nine and part of the front nine.

Barnett said she’s been very patient but protested Webster’s attempt to cut off her remarks under public comment. “I think I have a right to speak to commissioners,” she said.

“I was told over a year ago in September I did not need a conditional use permit,” Barnett said. “Here I am over a year and a half later trying to figure out what I need.”

“Their original request a year ago was they wanted to rehab some ponds. Under the county code it says you can do maintenance without a conditional use permit. Now they came to us with a plan for new ponds, new RIBs, (rapid infiltration basins), plans for new pump houses. There’s a lot of new construction. It’s what’s called an open space zoning so any type of construction, anything new requires a conditional use permit. They were told this back in July 2014, this is a process that takes 30 to 45 days,” Lacy said “She spent four months arguing for it and blaming us for delays when she hasn’t even applied for a conditional use permit.”

At an Oct. 15 meeting, UICN Vice-President of Operations Rebecca Oscarson asked for support from the Pahrump Regional Planning Commission under public comment.

“We’re very excited, it’s a good project, we’re going to get those ponds remediated, get things cleaned up and make it a beneficial use for the community,” Oscarson said.

She said a group of 10 stakeholders have agreed to help in the project. Pahrump Valley Disposal offered to loan equipment to grind up dead trees to use for mulch or wood chips. The Red Rock Audubon Society is supplying a grant to supply drip irrigation to 20 trees.

“Part of our frustration and I did want to share that with you, in September of 2013 our president met with the county to talk about what requirements we’re going to need so we can move forward with this project and have our ducks in a row. It’s very important that we wanted to be prepared because we wanted to move quickly because there’s so much work that needs to be done out there,” Oscarson said.

But when UICN submitted plans for the remediation work to the county in July, she said they were told they needed a conditional use permit.

“Up until that point we had been told we did not need one. So we’re a little frustrated. As we do our research and our homework and read through what was required we don’t need one. We’re not going to put in a country club, hunting club, gymnasium, public facilities, what we’re doing is remediating ponds that are hazardous and need to be remediated We’re trying to clean up trees that are dead and put palliative care for the weeds,” Oscarson said.

“We really do want to make this project right, we want to do right by the community,” she said.

Outside Wednesday’s meeting, Barnett alluded to the long history of feuding between Nye County and UICN. For example, she recalled in 2009 Nye County sent UICN a notice of violation for the Willow Creek ponds, but when the county found out the company didn’t own the ponds the county didn’t take any further action about the ponds.

Barnett said the company used an arbolist to see which trees were bug-ridden or dead and needed to be cut down.