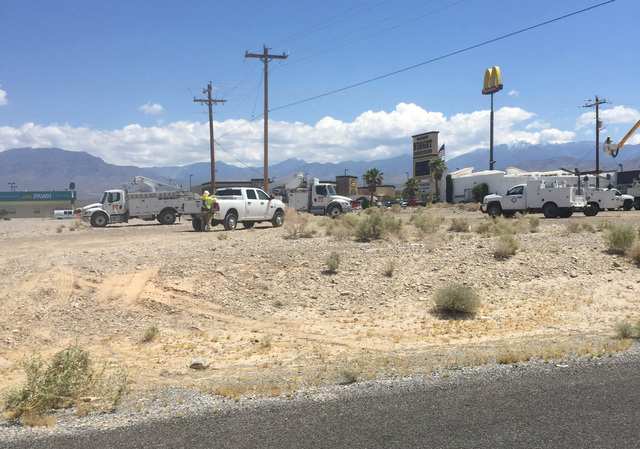 Odds are if you were driving around town the past couple of weeks you’ve probably noticed Valley Electric Association Inc. work crews have been busy around town installing wires on various utility poles in the area.

The work is part of VEA upgrading its framework ahead of rolling out its broadband Internet service that was announced earlier this year.

“This work is related to VEA’s efforts to provide optical fiber broadband communications service to all homes and businesses in our service area,” VEA said in a released statement. “VEA recognizes the need for improved high-speed communications and Internet service in our communities.

“We look forward to providing the most advanced communications network in the valley.”

The work is in its preliminary stages, and VEA noted that the first locations that will receive the broadband connection will be the Pahrump Community Library and the VEA campus.

VEA is connecting the library to the optical fiber network free of charge and will be providing the facility with free broadband communications service.

In April, VEA Chief Executive Officer Tom Husted said that the addition of broadband at higher speeds, upwards of one gigabit-per-second, could give the area an advantage over other cities in the area.

“We believe that that is not only going to give our consumers a leg up than their urban counterparts, but it’s actually going to give them a base to expand businesses, expand their capabilities,” Husted said. “The community has an opportunity to bring in a whole new population of people. Commuters, virtual commuters that presently cannot live in a community such as Pahrump because they don’t have the broadband capabilities.”

Husted explained that 1 gigabit speeds, which are higher than the max speed of 50 megabits-per-second that’s offered in town currently, would be available at around $150 per month.

“What’s cool about that is that we’re going to provide a superior service of anything that’s available in our service area at a lesser cost than what’s available currently, and we make money doing it,” he said.

According to BroadbandNow.com, Pahrump’s average Internet speed is 4.6 megabit-per-second, which is 87 percent slower than the state average.

Many aspects of the broadband endeavor remain in the planning stages, and VEA will announce additional details as they become available. Husted mentioned last month that the service could be up and running within six months.