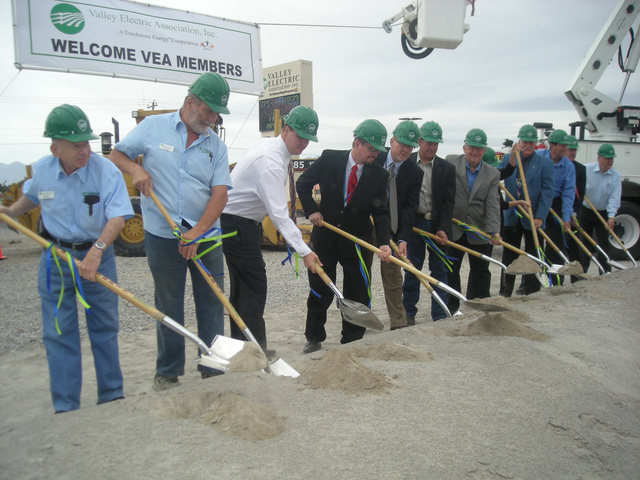 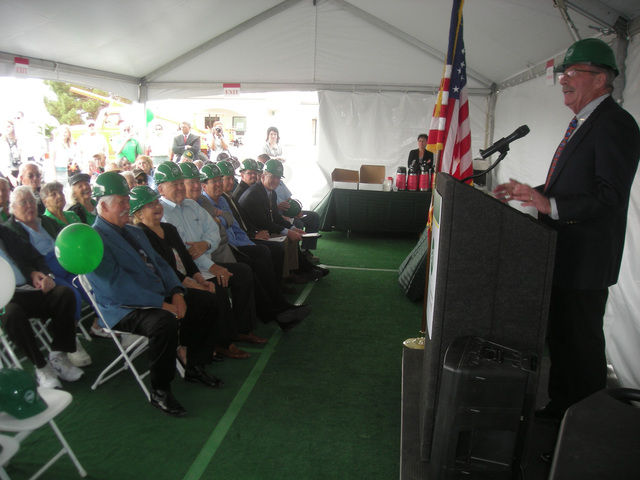 The construction is expected to take 12 to 14 months.

The second phase is a new 33,120-square-foot operations dispatch and engineering building. The third phase will be significant renovations to the customer service and lobby area in the present administration building. The fourth phase will be transforming the engineering building into the Valley Conference center, a 6,600-square-foot facility that will provide a venue for VEA meetings as well as community events.

VEA board president John Maurer said the ground-breaking was a significant milestone for VEA that will serve the needs of the cooperative for many years to come. He referred to the recent growth in the cooperative detailed at this year’s district meetings: the $100 million in new federal contracts, membership in the California Independent System of Operators and potential renewable energy generation starting in 2016.

“This campus expansion project serves as a reflection of our shared commitment to the continued success of our cooperative and the communities we serve. VEA is experiencing a significant amount of growth in recent years as a result of our proactive strategies to secure new sources of revenue,” Maurer said. “We simply do not have enough room or existing space for its operations in Pahrump. We recognize those space limitations of our existing campus, it would only serve to restrict VEA growth. We also lack a meeting room large enough for all of our VEA employees. It makes it difficult to conduct meetings and business with our employees.”

The main project will be the new operations, dispatch and engineering building. The last building constructed was the administration building, where customers currently pay their bills and the co-op holds monthly board meetings, built in 1993.

“This facility is designed to offer VEA the space and the resources it needs to provide community members with the highest quality of service not only today, but also many years into the future. The building will feature bright, innovative technologies, some you won’t even see in Las Vegas,” Valley Electric Association Chief Executive Officer Tom Husted said.

Husted said it will include a geothermal heating-cooling system and high energy insulation to reduce the carbon footprint. It will include a state-of-the-art, 24-hour dispatch center necessary to meet federal standards in operating the electrical grid, he said.

Husted said VEA selected Martin Harris Construction, a company with decades of experience in Southern Nevada and a track record of successes, as their general contractor.

Frank Martin, president of Martin Harris, said his company has been in existence 37 years. He said they built an elementary school in Pahrump, the first post office in Pahrump and a former addition onto Pahrump Valley High School.

“We wanted to make sure that we invited the Pahrump business community to participate in this job so a few weeks ago we actually did an outreach, which we usually do, in a community for local subcontractors,” Martin said. “I feel very strongly when some strange contractor comes into Las Vegas, they’re taking the money and they’re taking it back to wherever they came from. I know how that feels in this community and we wanted to make sure we involved the subcontracting community.”

But Martin said they were surprised in Pahrump to find contractors recommending competitors for jobs.

“It’s our commitment, and I know it’s VEA’s commitment, to utilize local subcontractors and local suppliers at every bend in the road possible,” he said. “It’s Martin Harris’ goal to make sure as much of that money as possible stays in Pahrump.”

Local contractors Jim Wulfenstein and Mike Floyd were in the audience during the groundbreaking. VEA expects the expansion project will create 90 to 100 on-site construction jobs in addition to 20 to 30 management and office support positions.

“We’re so happy to be part of this project in Pahrump and we will do our very best to make sure when we walk away and you walk in you’re going to be extremely proud of a state-of-the-art facility,” Martin said.

Husted said the VEA ambassadors were involved in the planning for the campus expansion, even spending a considerable amount of time with the architectural firm, Pugsley, Simpson and Coulter.

“This was the end-use consumer and, of course, the member owners coming in and saying, ‘have you thought about this?’ and ‘what about this?’ and made an enormous amount of improvements to things we didn’t think about because we look at this project from a different aspect. That has been another example of how the ambassadors have come into the company and made very positive changes,” Husted said.

So is the aggressive expansion of the cooperative into contracts with federal facilities and joining the California grid now causing VEA to spend $10 million on building expansion?

VEA gave this prepared response: “VEA’s tremendous success in acquiring new contracts and joining the CAISO certainly affected our decision to move forward with the project at this time. Even without these recent successes, the project still would have been necessary, although the expansion would have likely taken place at a later date.”