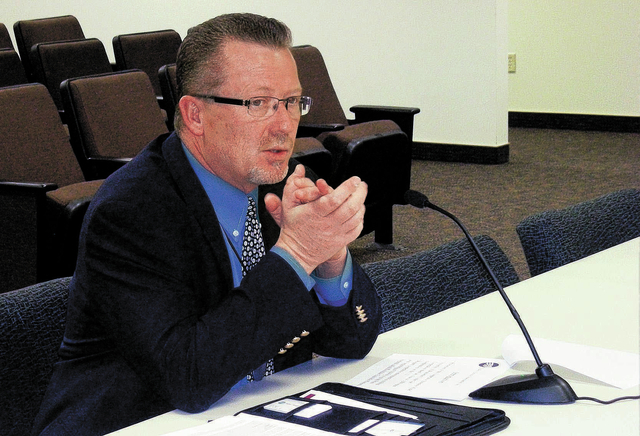 Valley Electric Association this week energized the new “innovation substation” at the Nevada National Security Site, one of the improvements set out in a five-year, $61.6 million contract to provide electrical service awarded to the cooperative in 2012.

A transformer will convert power from a 230-kilovolt power line VEA recently completed around the Spring Mountains to 138 kilovolts to supply the NNSS, Valley Electric Chief Executive Officer Tom Husted told board members during their monthly meeting Wednesday.

NV Energy filed a petition for a declaratory order that VEA had to pay an exit fee before taking over the contract under a new state law and apply for a permit to the Nevada Public Utilities Commission. The petition was rejected by the PUC.

“How does this ultimately impact NV Energy? It does not,” Chris Tomchuk, VEA executive vice-president of engineering and operations told the board.

He said the improvements include the extension of fiber optic cable between the innovation substation and Mercury.

“A year ago this was just a piece of dust with a block wall around it,” Tomchuk said.

VEA agreed to construct a 5.3-mile, 138-kilovolt power line to the NNSS Mercury switching center as part of the contract. NNSA engineers said the new transmission line will increase the reliability of the power supply, eliminate longstanding low voltage concerns and increase the capacity of the system from 40 megawatts to 70 megawatts. VEA will power facilities at Mercury and other areas on the NNSS, formerly known as the Nevada Test Site, like the device assembly plant and Jasper project.

In other business, Dan Tillman, VEA’s executive vice-president of administration and finance, said 175 customers already made payments using a new 24-hour EasyPay kiosk since a soft roll-out Oct. 14, an average of 13 per day. The kiosk is located next to the VEA drive-up window. Members can access the kiosk with a VEA EasyPay card.

VEA also began its SmartHub, an online application that allows members to pay their bills and access account information from computers, smart phones and tablets. This month, Tillman said 2,318 members used the SmartHub to access their accounts.

Husted said architects are expected to complete designs for the campus master plan by the end of the year, at which time the VEA board will review the costs. The master plan includes a new 30,000-square-foot building, that will provide space for more employees, allow VEA to host district meetings at its offices and enable handicapped access for monthly board meetings. VEA has to date refused to disclose estimates of the cost of the new building. The existing building at 800 E. Highway 372 was built in 1997.

“This next week we’ll bring in the ambassadors for input on one of the components of the project,” Husted said.

VEA Finance Director Rick Eckert said energy sales in September were up 28 percent over 2012 and the cost of power was 3 percent less. The cooperative sold $44.8 million in revenue compared to $40.3 million last year, he said. Gross margins for the cooperative are 58 percent higher than last year, Eckert said.

Residential sales were down a third of one percent, but irrigation sales are up 7.9 percent and sales for large commercial accounts are up 10.6 percent, he said.

Eckerd issued a verbal report on the monthly financials. A packet for the public containing the financial reports included a cover sheet warning about the release of information.

“This document includes confidential supplemental information provided as a courtesy to you as a member attending a VEA Board of Directors meeting. All information proposed herein is and shall remain the property of VEA. You may not make any copies, images or reproductions of the information contained in this document. Please return this packet and all of its contents to a VEA representative prior to exiting the VEA premises. You may not remove this packet or any of the pages and materials contained in this packet from the VEA premises.

“By viewing, using or reviewing these informational documents and the materials contained herein, you agree and understand that any unauthorized use, dissemination, reproduction or publication of these materials without the written consent of VEA is strictly prohibited. VEA reserves all legal rights.”