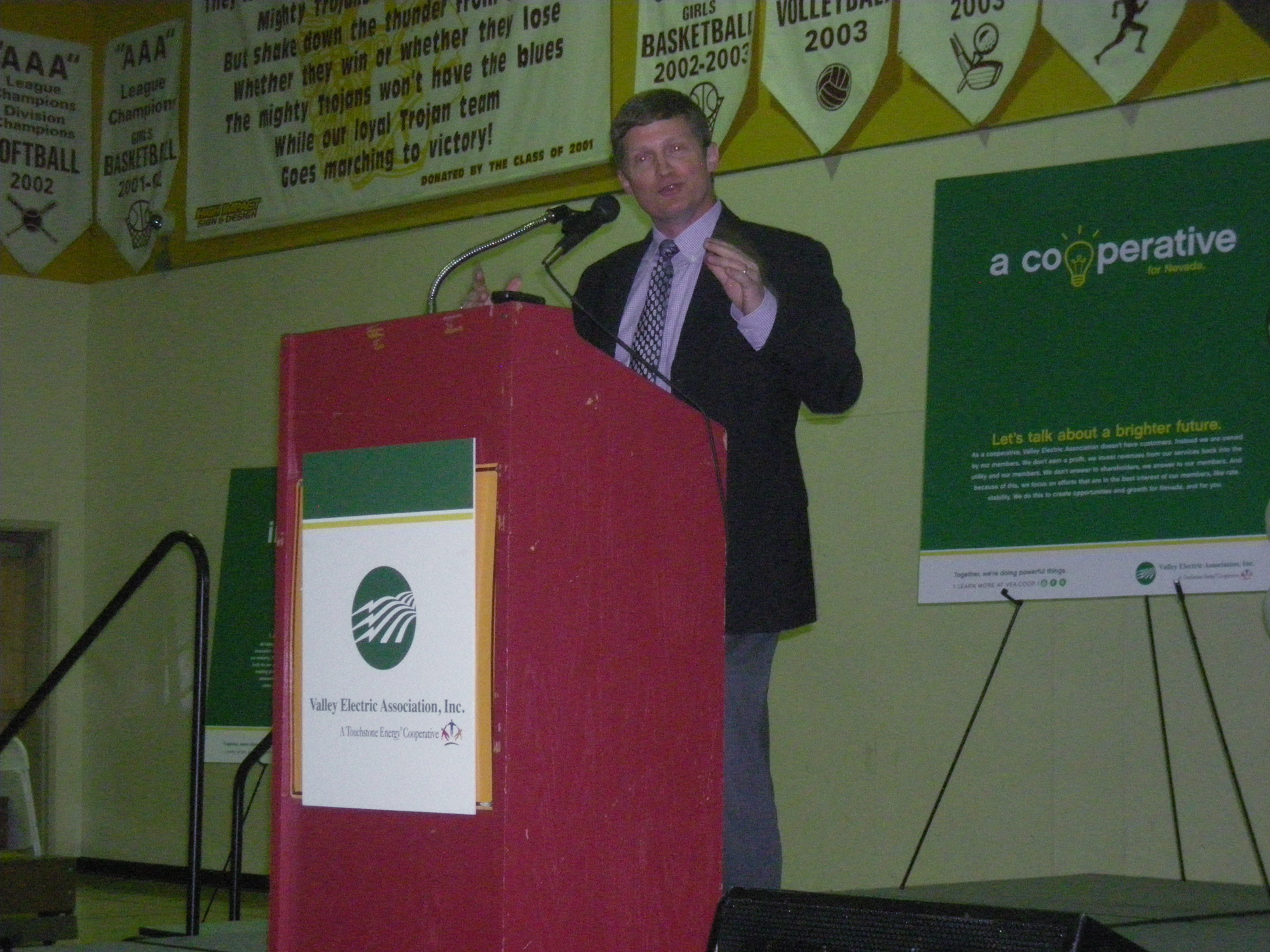 “You have at Valley Electric a much more direct and tangible impact on national security, geo-political issues than you probably have any concept and you have the potential to do even more,” Belote said. “You guys in this room really do have your fingers on some incredible buttons that allow the United States of America to project power around the world.”

VEA in September 2012 signed a five-year, $61.6 million contract to supply power to the Nevada National Security Site and a $36.6 million contract to purchase, maintain and operate the electric distribution infrastructure at Creech Air Force Base. Belote, who is now senior vice president of Cassidy and Associates, the VEA lobbyist firm in Washington, D.C., hinted a Nellis Air Force Base contract could be next.

“You guys provide that power in there to both the Department of Energy and Department of Defense and you have opportunities in the future to go after a great big project and completely upgrade that infrastructure and take what is already a phenomenal and sophisticated system but with an older, aging infrastructure and give it the foundation it needs for success deep into the years of the future and you have an opportunity to allow this place to become a solar hot bed and get the power into California, back down to Vegas, renewable energy onto the NTS or NNSS and the Nevada Test and Training Range,” Belote said.

Valley Electric Association Chief Executive Officer Tom Husted said near the end of his speech, “we’re also looking at expanding our core business contracting opportunities. One of those opportunities, and the colonel kind of alluded to that, the next military base that’s on the list is Nellis and we will move forward with looking at that as another opportunity for our cooperative.”

Husted recalled being told by a high ranking official VEA was going to be a vital component to one of the most sophisticated, powerful, militaries in the world after signing the Creech contract.

Belote said the Nevada Test and Training Range ground space is 2.9 million acres, almost as large as Connecticut, with an air space of about 15,000 square miles, about the size of Switzerland. When a combined Green Flag and Red Flag exercise is conducted, Nellis Air Force Base comprises the fourth largest tactical air force in the world, he said.

“So you guys, especially those six times a year when there are massive air exercises, you are safe from air attack I can promise you that,” he said.

Energy independence, like renewable energy, is also a vital facet of national security, Belote said. He recalled hosting a visit by President Obama to Nellis AFB, where he saw the 14 megawatt solar array that saves $83,000 per month. While that’s exciting, Belote said what kept him awake at night was the security of the power supplies at Creech Air Force Base.

“Creech Air Force Base had the ground control stations, during my tenure as base commander, we covered all 65 combat air patrols of Predator and Reaper drones over Iraq, Afghanistan and Somalia,” Belote said.

Engineers said there were backup diesel generators that would provide backup power if they really needed them, he said.

“I had a sneaking suspicion that a moderately armed Boy Scout troop with baseball bats and Leatherman tools, if they knew exactly where to jump the fence close to the Indian Springs casino, they could’ve brought down the entire air war.”

“By providing power to Creech Air Force Base right now you’re saving the lives of soldiers, sailors, airmen and marines who are projecting American power and making sure the gains, the incredibly hard-fought gains we earned in Iraq, the incredibly hard-fought gains we earned in Afghanistan, the men and women who are deployed over there are protected because power goes to Creech Air Force Base. There are satellite down links and men and women are sitting in ground control stations and flying those drones and protecting us,” Belote said.

Belote envisions VEA being able to build 10 to 12 megawatts of power generation on Creech AFB, more than is needed, for energy surety at the base, then selling the rest of the power or wheeling it through the California Independent System of Operators into California. He said VEA has a tremendous opportunity to get renewable energy to markets like Edwards Air Force Base and China Lake Weapons Testing Facility.

Belote recalled the struggle with SolarReserve trying to find a site for a renewable energy project. The SolarReserve chief executive officer outlined a project he said would revolutionize solar energy, by storing it after dark in molten salt storage. Belote said the only problem was the original location was four to five miles from the northwest corner of the Nevada Test and Training Range.

“I told him the aliens wouldn’t like it there,” Belote said. “There are some incredibly sophisticated and sensitive capabilities that we never talk about out there in the desert. I am sure that an 800-foot tower and a few thousand highly polished mirrors just a few miles from the corner of the range aren’t going to work.”

A second site 20 miles away wouldn’t work either. But Belote said U.S. Sen. Harry Reid, D-Nev., gave a little nudging to the Pentagon, MIT Lincoln Laboratory conducted sophisticated studies about electromagnetic interference and the military agreed to permit the project at Crescent Dunes, 13 miles west of Tonopah, where the 110-megawatt project is now nearing completion.

There is also a phase two of the solar hot water heater program, utilizing photovoltaic technology for members, Husted said.

“Many of you may have photovoltaic, PV panels on your roof, maybe in your backyard, maybe some of you don’t but you would like to. You would like to have an opportunity in a different fashion utilizing the cooperative business model. So we’re looking a developing a PV program, similar to our solar hot water heating program in certain aspects, roll that out and make that available to our membership here shortly,” he said.