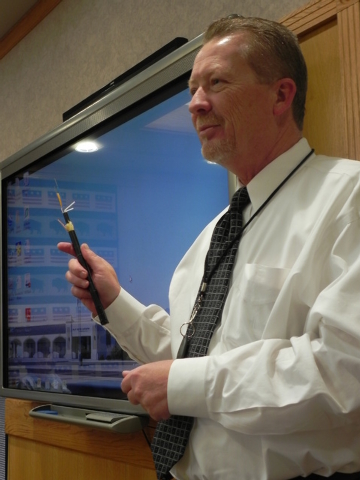 In the midst of celebrating their 50th year in operation, Valley Electric Association is moving ahead to offer its service area broadband internet, tentatively scheduled to be up and running by the end of the year.

“Preliminary we’re still forging ahead,” VEA Chief Executive Officer Tom Husted said. “We will be finalizing the build-out plans this week. We could be lighting people up as early as six months from now.”

The opportunity was initially tied to an initiative from the Federal Communications Commission’s rural broadband experiment. A $527,326 FCC grant to provide fiber-optic cable under the Connect America Broadband Project was awarded to VEA in December. However, the association’s board decided not to go forward with the grant.

In a statement, at the VEA’s Board of Directors’ meeting Jan. 30, “the board unanimously agreed to not move forward with the Connect America Fund grant. The board made the decision as a result of the regulatory and administrative costs associated with the grant. VEA plans to move forward on its broadband communications plans without this grant.”

VEA said in a statement to the FCC that there are several telecommunication carriers in the area that offer internet services in the form of satellite, WIMAX, cable, and DSL; however the backbone bandwidth available for these carriers is insufficient, which results in substandard offerings to our members, typically 1.5Mbps or lower download speeds.

The addition of broadband at higher speeds, upwards of one gigabit-per-second, could give the area an advantage over other cities in the area.

“We believe that that is not only going to give our consumers a leg up than their urban counterparts, but it’s actually going to give them a base to expand businesses, expand their capabilities,” Husted said. “The community has an opportunity to bring in a whole new population of people. Commuters, virtual commuters that presently cannot live in a community such as Pahrump because they don’t have the broadband capabilities.”

Husted mentioned that 1 gigabit speeds, which are higher that the max speed of 50 megabits-per-second that’s offered in town, would be offered at around $150 per month.

“What’s cool about that is that we’re going to provide a superior service of anything that’s available in our service area at a lesser cost than what’s available currently, and we make money doing it.”

According to BroadbandNow.com, Pahrump’s average Internet speed is 4.6 megabit-per-second, which is 87 percent slower than the state average.

The idea to add broadband to VEA’s arsenal was a natural progression, as the framework has been laid out through the years for company use.

“It really came internal. We have for years been putting fiber on our transmission facilities,” Husted said. “So as we build out our infrastructure, we’ve been putting fiber on there with the idea that we would utilize this for our own communications needs. We have a pretty extensive communications system right now, that’s totally operated and maintained within the confines of Valley (Electric Association).”

With the available options for broadband limited according to Husted, he felt it was a no-brainer for VEA to spearhead bulking up services in the area.

“As this company has grown, so have our internal communications needs and through the private sector we have been unable to acquire the necessary bandwidth that we’re going to need not only today, but into the future,” Husted said. “So, as we began to look at that, then look what was available to assist us it became obvious that there are no choices.”