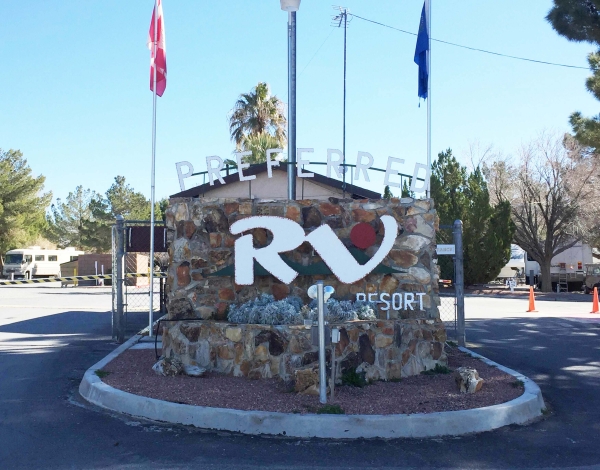 Valley Electric Association, Inc. received an award from the Pahrump Valley Chamber of Commerce earlier this month, highlighting the cooperative’s success in town.

At its annual installation dinner on Jan. 15, the chamber awarded VEA the Cornerstone Award, which is given out to a local business that demonstrates that it is an essential part of the community on a regular basis.

“For 50 years Valley Electric Association has been a vital part of our community,” said Debbie Davis, president of the Pahrump Chamber of Commerce. “The cooperative brought reliable and affordable power to its members in a time when neither of these was a foregone conclusion in rural areas.”

VEA Chief Executive Officer Tom Husted was honored and thankful to receive the award based on the co-op’s community involvement.

“In the past half-century VEA has always built on its strong foundation through a culture of innovation. Through the years we have implemented such initiatives as the most successful nationally-recognized ambassador program in the country, a solar water heating program with over 800 units and in 2016 we are deploying a 100 percent fiber-optic network to our service territory,” Husted said. “I’m very grateful to be working with a group of employees who have helped put us in this position. It’s deeply gratifying to be recognized by your business peers and community leaders. Having also won in 2008, we are very proud to receive this award a second time.”

The fiber-optic network Husted spoke of connected their second spot in town earlier this month.

The co-op’s wholly-owned subsidiary, Valley Communications Association, has successfully connected Preferred RV Resort, which will offer speeds of up to one gigabit per second to the area.

The resort, which is located at 18014 Crawford Way, was the first facility after the Pahrump Community Library to receive service through VCA’s optical fiber network.

Preferred RV Resort is a popular destination for community members and vacationers that utilize Wifi for many purposes.

VCA’s optical fiber broadband service to the resort offers download speeds of up to 500 megabytes per second, a significant jump in speed than the 10 MBps that the resort was previously connected to.

“Since VEA connected the optical fiber network, all feedback has been positive,” said James Horton, Preferred RV Resort general manager. “The number of average users has grown with the increased capacity and the flexibility of how it’s being used has grown as well.”

“The biggest benefit of the increased speed has been our ability to remove all of the necessary restrictions that accompanied our previous system,” said Horton. “Communications and entertainment options, for example, have increasingly migrated to online channels and when bandwidth is limited and shared, it’s necessarily restricted. It would be like telling our guests they can turn on the electric for a light or two, but not enough to turn on the air conditioner in the summer. We are very grateful to have been chosen as the first commercial installation of VCA’s new optical fiber broadband connection. We’re finally able to give our residents and guests what they need, expect, and very much rely upon.”

Another important benefit of VCA’s optical fiber broadband is the reliability, which was tested in town earlier this month when a snowstorm that affected a communications site on Mount Potosi knocked out Internet service to much of the valley.

“When most of the town lost Internet service last week, we didn’t,” exclaimed Horton.

Lastly, VEA was busy in 2015 donating money to various efforts, an act that helped them win the Cornerstone Award.

“It’s important to all of us at VEA to be able to give back to and take care of the communities that give so much to us,” Husted said. “During the holidays, our staff likes to get involved as well. Providing money donations definitely helps those organizations, but we do more by rolling up our sleeves and helping a charitable organization like the Salvation Army ring bells.”