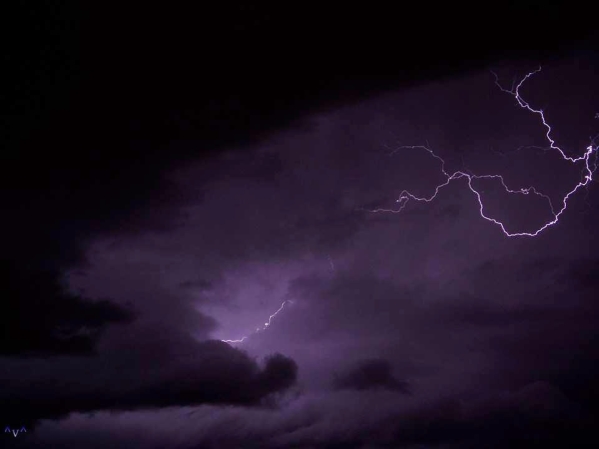 After the intense storms that brought two straight days of daily record precipitation amounts to Pahrump Sunday and Monday, some area residents had issues regarding their power.

Valley Electric Association was busy over the two-day period as 2,805 members were without power at various times due to weather-related issues. The largest population of those affected were in the south end of Pahrump.

There were 32 total incidents where power went out, with one being caused by high winds, and 25 of them attributed to lightning.

“We probably had well over 1,000 lightning strikes over that 35-hour period from the storms that rolled through here,” said assistant manager of operations James Andresen.

The service area that experienced power outages by VEA members were Pahrump, Amargosa Valley and Beatty.

Desert View Hospital was affected for a very brief time, as there was an open and close of one of the circuit breakers that left them without power for just a two-to-three-second time span.

Once power goes out at a location and phone calls go into dispatch at VEA, the co-op jumps into action to remedy the situation.

“Dispatch will call a crew in and send a crew out and our relays can pretty much pinpoint to where the lightning hit and so can our mapping system,” Andresen said. “We then send crews to the area where lightning hit to view physical damage. Sometimes it’ll completely destroy a (power) pole, and we’ll have to replace it.

“Once we verify that there is no physical damage then we’ll re-energize the circuit with a circuit breaker or recloser or a fuse.”

Andersen said that considering the amount of lightning and the outages they saw, that the area held up well during the nasty storm.

“I think it was pretty good. If you take a look at all the lightning strikes that hit over that 35-hour period… for a system in my opinion that is probably an A-plus,” he said.

VEA sees a slight monetary loss when power goes out during storms but their main focus is not the money, but rather making sure its members’ power is up and running.

“We do see a revenue loss, but it’s not large, our main focus is to get everybody’s power back on,” Andresen said.

Although lightning issues can’t really be halted by any preventative measures, VEA does takes steps to try and minimize the effects of the electrical charges.

“One problem about lightning is that it is pretty unforgiving,” Andresen said. “It will find a path to ground and with most of our lines being overhead it’s just something that happens.”

VEA has had issues with thieves stealing copper from their lines and that creates a double whammy when it comes to lightning strikes.

“During lightning storms, with the amount of copper that we’ve had stolen out of our system we can’t keep up with replacing just because it’s so widespread,” Andresen said. “That causes a lot more equipment damage to everybody. Because that copper is missing, lightning takes that pole as a path to ground. So when lightning hits the pole, it will blow the pole up.

“If the ground wire is on there it gives the lightning a path to ground, so the copper is more damaging in lightning storms like this.”

As far as preventative steps consumers and businesses can take at their residences, there are a few things that VEA is doing and recommends residents do to ensure their appliances and equipment aren’t affected by a lightning strike.

“We have taken strides to install uninterruptible power supply units,” said Rebecca Oscarson, key accounts representative. “It will help us ride through outages and you place them between the electrical receptacle and electronic equipment and it isolates the equipment from an outage.”

A more reasonable step consumers can take is buying a surge protection strip from any home improvement store like Home Depot.

“They’re $35 or $40 and a lot of them have an ‘always on’ feature and the Belkin ones even have a remote control so you can put it behind your television,” Oscarson said. “So it’s not hard to go out and make your home protected and we absolutely recommend that.”