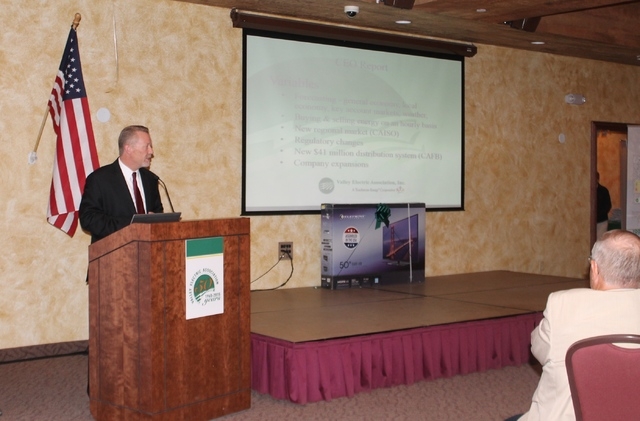 Sixty-six association members attended the meeting, nearly half of the 129 required in order for decisions to be made.

The low attendance did not matter, as the meeting was more of a celebration to tout the co-op’s accomplishments during the last year and to kick off the celebration of the association’s 50th anniversary.

The rise in debt was largely attributed to upgrading systems, and new contracts with the Nevada National Security Site, where VEA will sell power and operate systems, and Creech Air Force Base, according to VEA officials. Although the projects created debt initially, VEA expects those to be financially beneficial long term.

“There are two ways we can pay for our upgrades … to help maintain our system,” Husted said. “One is cash. Cash comes from you through your monthly electric bill. Or we can use our equity and we can borrow. We can borrow at a rate substantially less than you.”

“We’ve grown the company, as you can see our total revenue has gone up from $449,000 on an annual basis, to what including last year, $69.2 million dollars,” Husted said. “Over the last two years we’ve increased our revenues $20 million annually.

“So those new contracts, those new business opportunities that we’ve capitalized on, that’s an additional $20 million annually, without raising the rates.”

Displaying their reliability of their services the VEA showed the low number of the average time a customer has to deal with a power outage, which were attributed to mostly weather-related instances.

VEA said there was one long-term outage for the year, lasting just over an hour. That equaled to the average customer being without power for less than 1 percent of the time in 2014.

VEA also announced to the members that they are starting to put fiber optics on their system in order to run those wires into homes to start up their own broadband system.

“You probably got a landline, got your cell phone or two, if you got kids you got three or four… you got your cable TV package, you got your internet package, you bundle all that together and you spend more on communications on a monthly basis than you do on electricity,” Husted said.

Although VEA is excited about venturing into the world of communications, there is not a set timetable to when they will have that system up and going, and Husted said they couldn’t get started fast enough with the project.

The meeting was the second in a series of six meetings, the third and fourth already have taken place in District 4 on Thursday, and District 2 on Tuesday.

The two remaining meetings are being held in Districts 1 and 3, and feature voting for who will represent their respective district on the cooperative’s board of directors.

That meeting is Thursday at the Pahrump Nugget, 681 S. Highway 160. Registration opens at 5 p.m. and the meeting begins at 6 p.m.

The District 3 meeting is tonight, March 25, at the Beatty Community Center, 100 A Ave. South. Registration opens at 5 p.m., meeting begins at 6 p.m. More information on both meetings can be found at www.vea.coop.