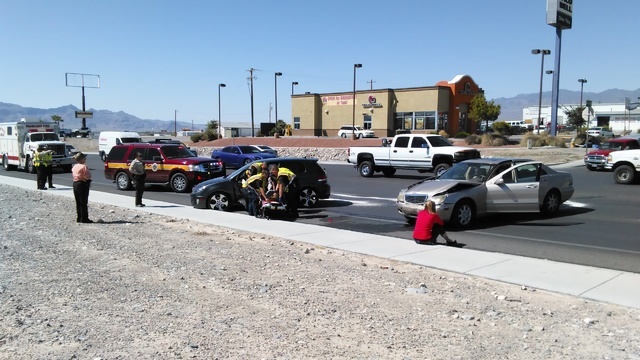 At least one person was transported to Desert View Hospital after a two-vehicle collision along Highway 160 at Matthew Lane last Thursday afternoon. Southbound traffic was diverted as crews worked to clear the scene. Both vehicles sustained substantial body damage. Selwyn Harris/Pahrump Valley Times 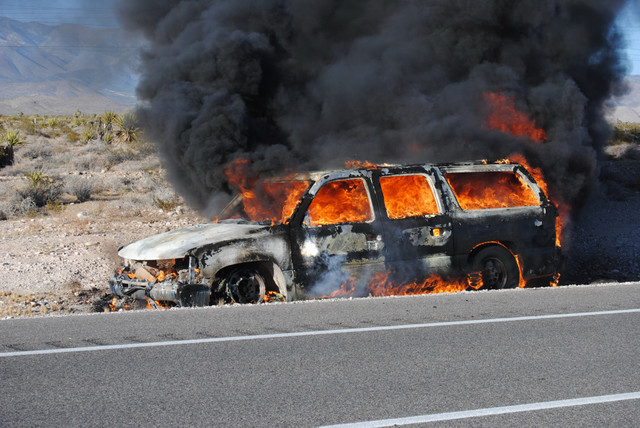 Mechanical failure is believed to be the cause of a fast-spreading vehicle fire last Wednesday, July 13, along south Highway 160. Pahrump Valley Fire and Rescue crews were dispatched to mile marker 36 after passing motorists reported an SUV was totally engulfed in flames, just after 6 p.m. Special to the Pahrump Valley Times

Mechanical failure is believed to be the cause of a fast-spreading vehicle fire last Wednesday, July 13, along south Highway 160.

Pahrump Valley Fire and Rescue crews were dispatched to mile marker 36 after passing motorists reported an SUV was totally engulfed in flames, just after 6 p.m., according to Fire Chief Scott Lewis.

Upon arrival, we found a well-involved SUV on the north side of the roadway shoulder, Lewis said. There were no immediate exposures and both of the occupants had egressed out of the car safely. The cause is thought to be mechanical failure.

Fireworks are believed to have ignited a small ground cover fire along the 4000 block of East Paiute Boulevard last Thursday.

Upon arrival, crews found a small brush fire with some extension to a nearby parked vehicle, he said. It is thought to be related to the illegal use of fireworks that were placed in a position that was showering a nearby vehicle and burning materials.

No injuries were reported as a result of the fire.

Several hours later, fire crews responded to the area of East Courtnay Lane after a resident fired up a barbecue grill just before 5 p.m.

Upon arrival they found an exterior patio on fire, Lewis said. It appears that it was ignited by the use of a barbecue underneath that structure. Fire crews held it in place, with no extensions to the primary dwelling and no injuries were reported.

Officials with the Bureau of Land Management are investigating a brush fire after Pahrump fire crews were summoned to the area of Gamebird Road and Winchester Avenue at 1:30 a.m., on Sunday morning.

Upon arrival, crews found just about an acre of a mixed-fuels fire, Lewis said. There was no one in the immediate vicinity and the fire, which was on BLM land, is under investigation by BLM officials.

Also on Sunday, first responders were dispatched to 2700 block of North David Street for another brush fire, just before 10:30 p.m.

Lewis said crews attacked and extinguished the slow-moving ground cover blaze, running along the side of the roadway.

On Monday both fire and hazmat crews responded to Manse Elementary School after reports of a fuel spill just before 1 p.m.

Lewis said a tractor-trailer driver making a delivery ruptured a side fuel tank on a fire hydrant.

The truck was attempting a maneuver in order to unload materials, Lewis said. The fire hydrant located at the back of the property was damaged and taken out of service. A cleaning crew arrived on scene to mitigate that spill, which was approximately 50 gallons of diesel fuel. We also made all the appropriate notifications to the state because it met the threshold for reporting purposes.

Also on Monday, fire crews responded to a porch fire along the 400 block of Belville Road just before 3 p.m.

Upon arrival, a majority of the fire had been extinguished, Lewis said. Crews found that it was most likely related to the improper disposal of smoking materials in a plastic trash container which then extended to a makeshift bar and some nearby appliances. There were no extensions to the primary dwelling and no injuries reported.