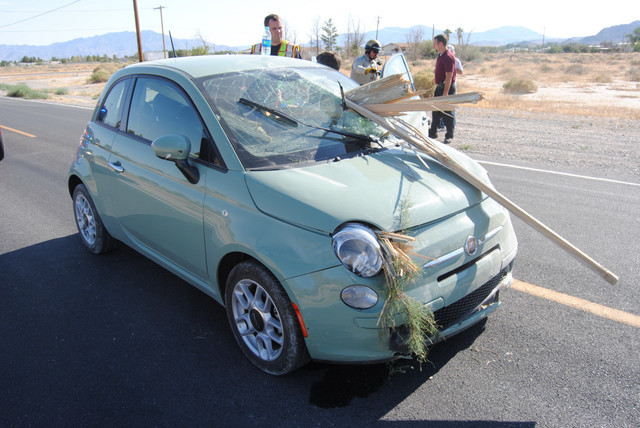 Special to the Pahrump Valley Times The driver of a late model subcompact vehicle sustained minor injuries after plowing through a wooden fence, nearly getting impaled by a section of the barrier in the area of Blosser Ranch Road and North Leslie Street last week. That driver was transported to Desert View Hospital and is expected to make a full recovery. 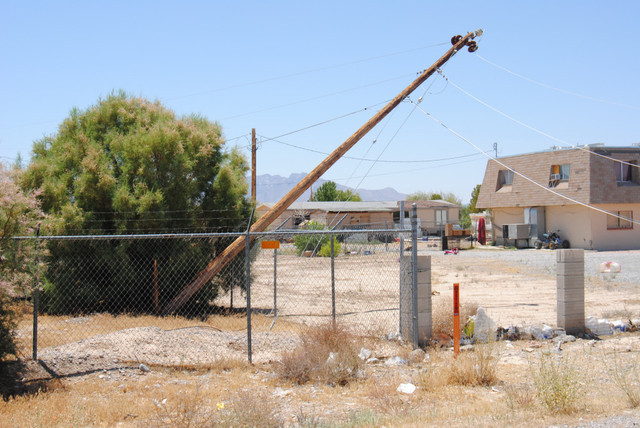 On Thursday afternoon, fire crews were dispatched to the area of West Blosser Ranch near Barney Street for a reported downed power line after a dump truck failed to lower its bed. Special to the Pahrump Valley Times

The bus was unoccupied and it was not in any of the security areas of the facility, he said. Crews did an excellent job by removing the other buses that were immediate exposures away from that area. Our crews made quick effort of the suppression.

The initial investigation Lewis said, revealed a mechanical problem within the engine compartment was the cause of the fire.

The two people transported are expected to make a full recovery.

There were two people who sustained minor smoke inhalation and were transported from the scene by Medic 5, Lewis said. They were the operators of the buses. It had nothing to do with the inmate population at the facility.

Fire crews responded to the area of Frontage Road early Saturday morning after receiving reports of an unknown water-related problem.

Lewis said several businesses, including the Holiday Inn Express, were affected by a broken water line just after 3 a.m.

Upon arrival, we found a broken water line that disrupted the water supply to several businesses and restaurants, he said. Crews worked diligently with Utilities Inc., who secured the water and began effecting repairs. Businesses were without water for a good portion of the next day.

Normal operations of the businesses were temporarily interrupted while Utilities Inc., crews repaired the line, as partial water supplies were restored later that day.

On Thursday afternoon, fire crews were dispatched to the area of West Blosser Ranch near Barney Street for a reported downed power line.

We found that not only the power line was down, but a utility pole had been snapped in half, Lewis said. The investigation revealed that a dump truck had not lowered its dump bed. It traveled down the road, ripped the lines and pulled down the energized power pole.

On June 22, fire crews responded to the area of Blosser Ranch Road and North Leslie Street after the driver of a car plowed through a wooden fence.

Upon arrival, fire crews were met with a head-scratching moment just before 5 p.m.

A section of the fence had broken loose and actually went through the grill and the windshield of the vehicle into the passenger compartment, just scraping by the drivers right side, Lewis said. It easily could have been an impalement of the driver. Fortunately for that driver, it was relatively minor injuries. They were transported from the scene to the local hospital.

Upon arrival we found a one-vehicle rollover with entrapment and injuries, Lewis said. Engine 5 and our medic teams completed the extrication and transported one patient by ground to UMC Trauma in Las Vegas. The second patient was transported by Mercy Air 21 to UMC Trauma. NHP is investigating the cause of that accident.