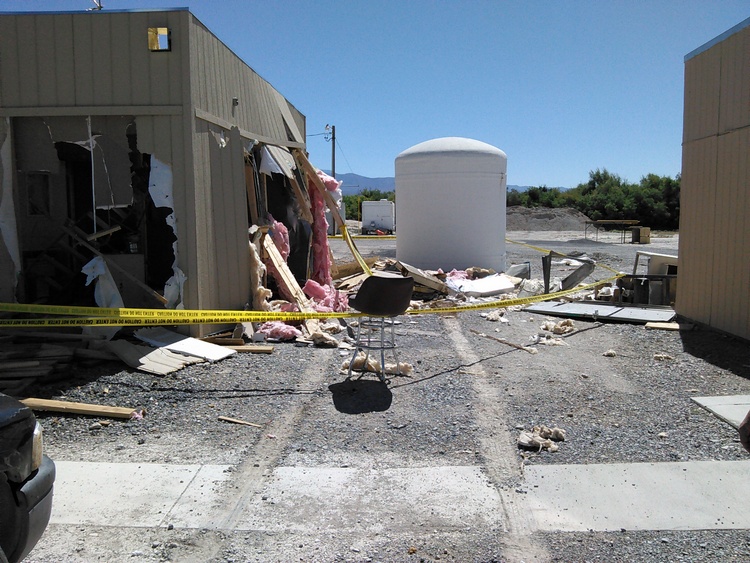 There are more questions than answers following Monday’s early morning vehicle collision that destroyed a newly-constructed portion of the VFW Post on Homestead Road.

The Nye County Sheriffâs Office has not responded to several requests for comment.

Post Commander Tom Vick said he arrived at the site just before 6 a.m., to find emergency vehicles on the scene.

“When I got here the sheriff was already here with their lights going and the car was still inside the building,” he said. “I couldn’t believe it because we just put a lot of money into this project for the new expansion. We started it about 3 months ago and we were almost done.”

Vick said the driver of the vehicle was not on the scene and he estimates the car had to be traveling at a very high rate of speed to cause all the damage to the structure, estimated be in the area of several thousand dollars.

“I’m still scratching my head about how this accident happened,” he said. “In order to cause that much damage they had to have been going upwards of 60 miles per hour at a minimum. The person who was driving took out a brand new walk-in refrigerator and two walls. It went through one wall and then took out a steel-framed door then it took out the other wall.”

Vick noted that crews were just weeks away from finishing the project at the time of the incident.

The new addition was to replace the existing bar at the post.

“We were opening up a new canteen bar because we were going to close down the old one thatâs here,” he said. “It’s almost like starting from scratch. A lot of people put in their time to help get this project going.”

As far as a new completion date, Vick said it still “up in the air.”

“Right now all we can do is contact the insurance companies and let them sort everything out,” he said. “This will set us back probably about six months. We can always use donations and volunteers but right now with the building the way it is, we can’t do anything until the contractor shores it up so it’s safe to enter.”